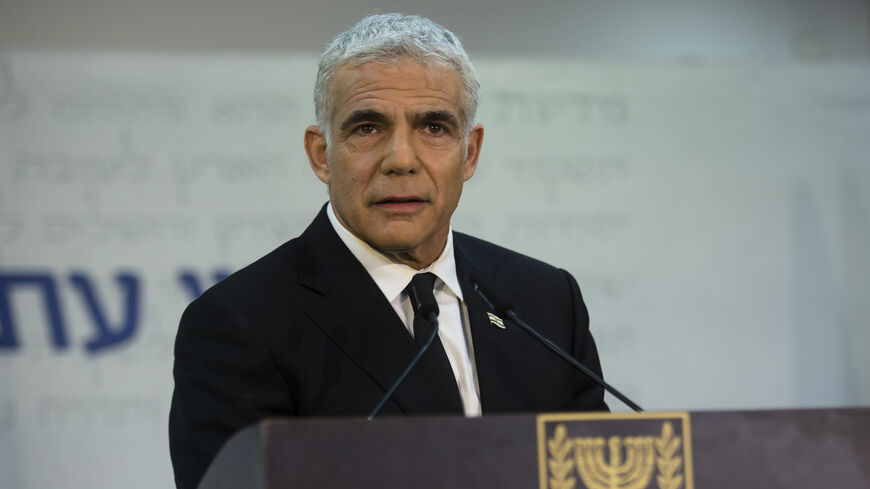 Barring dramatic last-minute developments (not a far-fetched possibility given Israel’s record), the Knesset will vote this coming week to disband itself, and Alternate Prime Minister and Foreign Minister Yair Lapid will assume office June 28 as Israel’s 14th prime minister. His term in the caretaker position will last at least four months, until elections are held, probably in early November, followed by negotiations on forming a new government, which could drag on for two months.

Throughout the upcoming election campaign and subsequent coalition wrangling, Lapid will be driven around in a heavily guarded convoy, surrounded by dozens of bodyguards, pinching himself in disbelief at having in some measure avenged the political debacle of his late father, Justice Minister Yosef (Tommy) Lapid. Will his son’s premiership 15 years on be a fleeting political episode, or a long-term incumbency? The answer depends to a large degree on the events of the coming months. Ultimately, it will be down to him.

The elections, Israel’s fifth in less than four years, will be the first time since 2009 that Benjamin Netanyahu, head of the Knesset opposition for the past year, will not be running as an incumbent. This is a clear disadvantage for the man who was Israel's longest-serving prime minister and had grown accustomed to the tremendous power of the post, to all its trappings and to the limitless possibilities to shape the political agenda during an election year.

If Netanyahu, who still enjoys widespread popularity, mobilizes sufficient votes in November to achieve a 61-seat Knesset majority, Lapid will go down in Israeli history as the shortest-serving prime minister after incumbent Naftali Bennett, who will have served just one year once he hands over power to Lapid. Both will have broken the 20-month record of Ehud Barak who was ousted as prime minister in 2001.

Two scenarios could guarantee Lapid a longer term than four months: If the election results are inconclusive and additional elections are set, or if his centrist Yesh Atid party wins sufficient votes and can muster the support of other parties to achieve a Knesset majority.

Lapid’s prospects of putting together Israel’s next government or leading the opposition are about even, right now. Not bad for a politician without a decorated military past (he served as a reporter for the army newspaper Bamahaneh), without a high school diploma and without the backing of American billionaires for his war chest, who abandoned his career as a popular columnist and TV anchor and host to enter politics a decade ago.

Here are some little-known facts about 58-year-old Lapid. He wrote one of Israel’s most widely read newspaper columns. He penned a posthumous autobiography of his father ("Memories After My Death"). A certain New York publisher holds the translation rights to a book by Lapid Jr., but was waiting for the “right time” to publish, and did not believe Lapid would rise to Israel’s top political post. Ernest Hemingway was one of Lapid’s role models. His mother, Shulamit Lapid, is a successful author. He has several supporting film roles under his belt, has written song lyrics, one of which (“Living on Schenkin”) was performed by the now-defunct all-girl Mango pop band. Lapid is an amateur singer and was a popular guest at singalongs and poetry readings throughout Israel while he was prepping for his political debut.

Israel’s former Prime Minister Ehud Olmert, one of his father’s closest friends, was a political mentor. Since Olmert was convicted on charges of corruption, he has severed ties with his “Uncle Udi.” He has impressive self-discipline, which helps keep his weight in check. Lapid is a US culture buff, driving for days through the American countryside when he wanted to take time off to clear his head, accompanied by the soundtracks of Bruce Springsteen, Bob Dylan and their friends. He worked for a while for Arnon Milchan, the Israeli-American billionaire and film mogul who is one of the prosecution witnesses in the state’s corruption indictment of Netanyahu. Lapid himself is also on the prosecution’s witness list.

He is a man of rare courage. As an amateur boxer, he once faced an opponent nicknamed “Tyson,” who humiliated him and punched him out within 30 seconds to the sounds of the cheering crowd. Nonetheless, he picked himself up and finished the fight with his head held high.

The experience served him well in the political arena. The first time he ran at the head of the Yesh Atid party he founded in 2012, the party garnered 19 Knesset seats, but plunged to 11 the next time round. He joined forces with former army chief and current Defense Minister Benny Gantz to run against Netanyahu, but ended up merging his party into Gantz’s Blue and White party to bolster their prospects. A bitter parting of the ways ensued, after which Lapid once again ran at the head of Yesh Atid in 2021, winning 17 seats. He is now headed for the prime minister’s seat, his head held high.

Lapid will run in the November elections against a rival whose back is up against a wall. This would probably be Netanyahu’s last hoorah. It’s now or never. A victory would not only bring him back to the prime minister’s seat after just one year in exile, it will also allow him to undertake a constitutional coup, dismantle the law enforcement system and thereby suspend or vacate his corruption trial.

This plan (on Netanyahu) will be the ace in Lapid’s campaign. An issue he will attack. He will place all his chips on this bet. He, too, may not have too many other cards to play. If he lucks out and misses this opportunity, born of an unusual political constellation, Lapid may not get a second chance, and he knows it.

Lapid’s greatest drawback is his lack of security and defense experience. Israelis carp about the cost of living, housing prices, public education, traffic congestion and social divides — but time and again they vote based on their “sense of security.” Israelis elect the leader who provides them the most reasonable sense of security of all the candidates. Lapid’s rival has branded himself successfully for years (we have seen that in election results and many polls) as “Mr. Security” in the eyes of at least 50% of Israelis. Gantz, another potential rival, also boasts an impressive resume in this regard. This will be Lapid’s heaviest burden of proof.

Lapid’s best and most effective chance of rising to this challenge would be to convince former army Chief Lt. Gen. (Res.) Gadi Eizenkot to become his running mate. Gantz is also courting Eizenkot, who replaced him at the time in the top army slot. Lapid’s promises to Eizenkot sound tempting. Gadi Eizenot will be my Mr. Security, he recently said. With Gantz, he will be just one of a series of generals.

Eizenkot may not see things quite this way. A final decision is expected in the coming weeks and is expected to have a significant impact on Lapid’s Election Day prospects.

On June 23, still in the role of foreign minister and alternate prime minister, Lapid insisted on a quick trip to Ankara in the midst of the political chaos in Jerusalem to thank his Turkish counterpart for thwarting an Iranian plot against Israeli targets in Turkey. The lightning visit included a rare visit to Turkey’s National Intelligence Organization (MIT) to observe up close its joint intelligence cooperation with Israel’s Mossad agency. This is the first shot in Lapid’s campaign to brand himself as equal to Israel’s onerous national security tasks. This is the money time for which he has been preparing for as long as he can remember.