Kurdish units and Iranian-affiliated factions in Syria have formed a joint operations room under Russian supervision to counter a possible Turkish military operation in northern Syria. 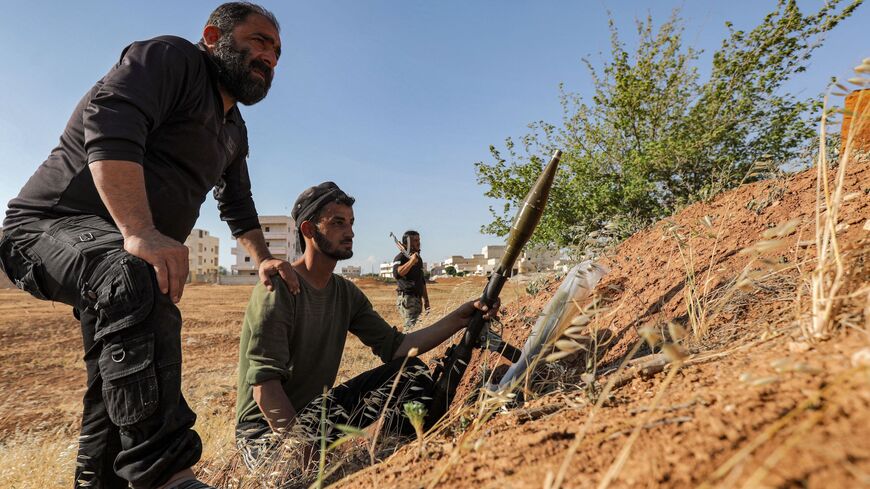 One of the Turkish-backed Syrian rebel fighters holds a rocket-propelled grenade launcher while sitting at a position along the battle frontlines with the Syrian Democratic Forces (SDF) in the countryside of Syria's northern city of Manbij, on June 8, 2022. - BAKR ALKASEM/AFP via Getty Images

Last month, several Syrian groups and battalions with different affiliations have increased coordination ahead of an expected Turkish operation in northern Syria, according to news accounts and different not-for-attribution sources.

The disparate Syrian groups have reportedly established a joint operations room, so-called ‘North Thunderbolt’ located at a Russian base in the village of Hardatnin in the northern countryside of Aleppo, according to Bas News, a news site based in the Kurdistan Region of Iraq.

According to sources cited in the report, the operations room includes the Kurdish People’s Protection Units (YPG); a battalion affiliated with the Iran-backed Fatemiyoun; a battalion affiliated with the Lebanese Shiite Hezbollah movement; Iranian-backed groups from the towns of Nubl and al-Zahraa; formations of the Syrian regime forces from the towns of Abna al-Sahel, Hayyan, Haraytan, Anadan and Masakan; and the Baath Brigades.

In this context, a high-ranking military source from the Kurdish-led Syrian Democratic Forces (SDF) told Al-Monitor on condition of anonymity, “Iran is the one who formed the operations room by pressuring the regime and Russia and also through the Iranian leaders in the PKK’s Afrin Liberation Forces, which are present in northeastern Syria. Iran is thus seeking to protect the Shiite-majority cities of Nubl and al-Zahraa located near the lines of contact with the areas controlled by the Turkish-backed opposition, which will be at risk if the latter takes control of new areas following the Turkish operation.”

He added, “Meetings have been ongoing since the Turkish president announced preparations to launch a military operation in Syria. PKK leaders in Qandil began holding meetings with SDF leaders in order to pressure them to allow the regime and Iranian forces to enter their areas of control to deter opposition and Turkish forces. This is one of the reasons that led SDF leaders to declare that we will fight alongside the regime if Turkey attacks.”

Anas Shawakh, a researcher at Jusoor Center for Studies, said his sources also indicate the presence of an operations room, adding that the Iranian militias are primarily focused on protecting Nubul and Zahra in the event that Turkey starts its military battle.

“The YPG is being forced to cooperate with Damascus and its backers, whether Iran, Russia or Hezbollah. All believe that a Turkish incursion could become permanent, threatening the territorial integrity of Syria and the ethnic cleansing the Kurds,” said Joshua Landis, the Sandra Mackey Chair in Middle East Studies at the University of Oklahoma said to Al-Monitor. “It also underscores how the Kurds of northern Syria prefer the Damascus government to Ankara. Assad cannot rule northern Syria without the Kurds and the Kurds cannot protect themselves without working with Damascus.”

Rich Outzen, who served as a senior adviser to former US Syria envoy James Jeffrey [during the Trump administration], confirmed that: "The YPG-regime-Iranian tactical alliance west the of Euphrates is hardly new. It goes back to 2016 at least, [when] YPG attacked the last opposition supply lines into Aleppo to seal its fate."

The director of the media office of the Syrian Democratic Forces (SDF), on his Twitter account, denied the formation of a joint room to coordinate joint operations between the SDF and the Iranian militias. Al-Monitor also contacted SDF official spokesperson, Aram Hanna, and the head of the Syrian Democratic Council, Riad Darar, to ask them about the matter, but they have not responded so far.

The new field development comes in light of increasing Turkish threats to launch a military operation against an SDF-controlled area in northeastern Syria.

Turkish President Recep Tayyip Erdogan announced on May 23 Ankara’s readiness to push the SDF 30 kilometers (18 miles) from its borders and to establish a buffer zone with the aim of returning Syrian refugees in Turkey to the area in northern Syria.

Meanwhile, Ankara is still threatening to carry out the operation without specifying a date, in conjunction with maneuvers, military exercises, and reinforcements for the Turkish and opposition forces in the countryside of Aleppo.

Fayez al-Asmar, a military analyst and strategic expert and a defected colonel from the Syrian regime residing in Turkey, told Al-Monitor, “The Russians are investing the Turkish threats to pressure the SDF to hand over its areas of control in Tal Rifaat and Manbij to the regime before losing them, as happened in the Olive Branch and Peace Spring operations, through which the Turkish army took control of the cities of Afrin, Tell Abyad and Ras al-Ain. Russia aims to control these areas to pressure the opposition-controlled areas and keep the Turkish forces away from Nubl and al-Zahraa.

Abdulaziz al-Khalifa, a correspondent for the pro-opposition Baladi news agency In northeastern Syria, told Al-Monitor, “Russia aims to gather all Iranian militias and allied forces affiliated with the regime under one operations room to control their movements and use them to confront Turkey.

Recep Tayyip Erdogan addressed June 1, 2022, his AKP party saying that "we are entering a new phase of our decision to establish a 30-km deep safe zone along our southern borders. We are clearing Tel Rifat and Manbij of terrorists. After that, we will gradually do the same in other areas. And we will see who supports Türkiye’s legitimate security measures, and who tries to hamper them,”

However, Russia’s special envoy for Syria, Alexander Lavrentiev, said on June 15 that Turkey's possible military operation in Syria is an “unwise act, as it may cause escalation and destabilization.”

Speaking on the sidelines of the Astana meetings in Kazakhstan, Lavrentiev added that Moscow will not turn a blind eye to the new Turkish military operation in northern Syria in return for Ankara's position on Finland and Sweden joining NATO.

Lavrentiev further called on Ankara to resolve the issue of northern Syria peacefully, pointing out that they will discuss the field situation during the Astana talks.

Shawakh told Al-Monitor, “The reason for the contradictory Russian positions on the Turkish operation in northern Syria is Moscow's attempt to express its dissatisfaction with the US role by declaring its understanding of Turkey's security concerns. But Russia is also rejecting the Turkish operation to score some points before the Damascus government and its supporters, as well as its allies, especially the Iranians.”

Shawakh added, “In general, Russia will benefit more if the Turkish control is stronger than the US influence in Syria. In any case, the Russian rejection will not discourage Turkey from launching the military operation.”

Editor’s Note:  This article has been revised and updated to include subsequent reporting, and the statement by the Syrian Democratic Forces.