Participating at the United Nations Ocean Conference in Portugal, head of the Israeli NGO EcoOcean Arik Rosenblum explains the actions that they are taking to clean the seas and to protect marine ecosystems. 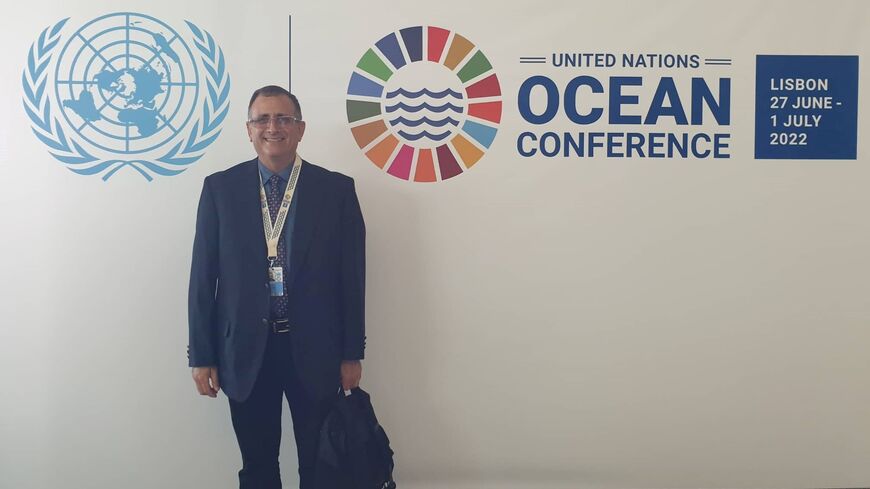 Arik Rosenblum, CEO of the Israeli nonprofit EcoOcean, arrives at the UN Ocean Conference in Lisbon on June 28, 2022. - Courtesy of EcoOcean

Israel is well represented at the June 27-July 1 United Nations Ocean Conference in Lisbon. Director of the National Marine Environmental Protection Unit Rani Amir told the assembly, "Israel’s Mediterranean and Red Sea coastlines are among the country’s most valuable natural assets. Nearly 70 percent of the population, much of the country’s economic and commercial activity and a rich diversity of natural environmental culture are concentrated along these coastline strips."

Amir admitted that Israel’s marine environment had suffered great  pollution over the years. Still, he said that since the mid-1990s, and most especially under the current government, conditions have improved, including identifying marine areas to be protected and preventing overfishing.

One example Amir cited was the decision by Israel’s Environment Protection Minister Tamar Zandberg three weeks ago, to declare the Palmachim sea region, which is located within the Israeli Exclusive Economic Zone, as a protected marine area. "This [newly declared] unique area of 450 square kilometers will double the protected area under Israeli jurisdiction," he explained. The decision required actions by many environmentalist players, including the Society for the Protection of Nature in Israel.

Another important Israeli representative at the Lisbon Conference this week is Arik Rosenblum, CEO of EcoOcean. The NGO tweeted that Rosenblum will be speaking on "the power of harnessing networks at the local level for community empowerment and for creating a positive social and environmental impact in the surrounding coastal context."

EcoOcean was established some twenty years ago. Supported by the Israeli-Swedish Weil family and by a group of leading scientists and environmentalists, its mission is to empower both adults and children to care for the Israeli region's marine and coastal environment.

Rosenblum told Al-Monitor that the group owns and operates one of Israel’s main research vessels, named Medex. Professor Laura Steindler of the Haifa marine biology faculty, one of the researchers using the boat, said that their educational programs about global warming and marine sustainability reach more than 25,000 students of all ages every year. "Just a week ago, we broadcast from our ship to 30 classes in real time, offering them an opportunity to follow researchers in their work and see the wonders of the sea through the lens of our ROV," an underwater machine operated remotely, she said. "We conduct these activities in both Hebrew and Arabic."

One of the EcoOcean activities Rosenblum is most proud of is the Blue Flag label for clean beaches, in cooperation with different municipalities. Another important activity is systematic cleaning of beaches with volunteers. In the past three months alone, he said, 16,000 volunteers worked on cleaning the coastline.

Rosenblum feels that the international 30x30 campaign (to protect 30 percent of the world's oceans by 2030) is not moving fast enough. The need to accelerate action is one of the major topics he is currently discussing at the Lisbon Conference.

In the meantime, the actions of EcoOcean seem to make a difference. A June 23 tweet by the environment protection ministry noted that "80.3% of the open beaches measured were rated clean to very clean, a slight improvement from the previous index which stood on 78.4%."

However, more action is needed to guarantee clean, sustainable beaches and seas, where marine ecosystems can flourish. Zalul NGO, another environmental association for protecting the seas, rivers and water of Israel, referred recently to an initiative it has been conducting for the last two years, of sampling waters to examine what flows in urban drains to the sea and to water streams. Results, they say, were definitively not encouraging. Pollution "harms the many sea users, bathers and surfers as well as nature and animals," said Zalul on June 14.