An Israeli court has ruled in favor of protecting Israel’s beaches from commercial use such as keeping tents and other equipment on them. 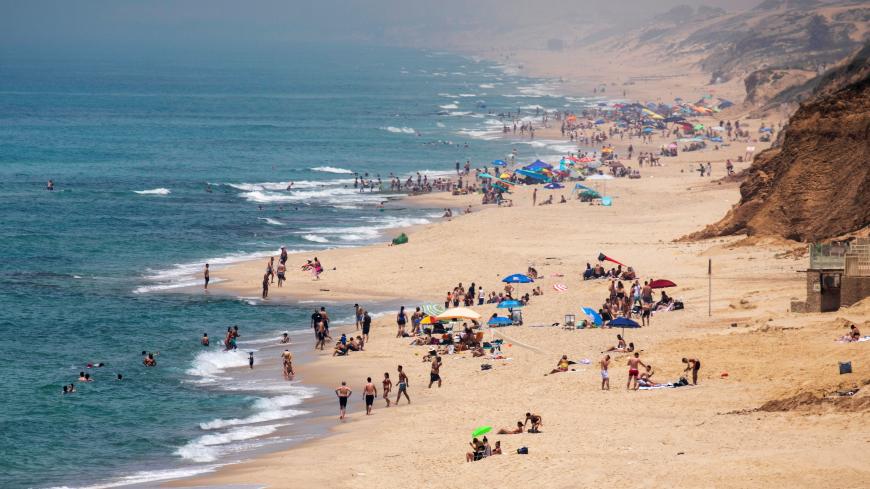 People visit a beach along the coast of the Mediterranean Sea in Ashkelon as restrictions following the novel coronavirus ease around Israel, May 16, 2020. - REUTERS/Amir Cohen

Israel's the High Court has rejected a petition submitted by the owners of a company that supplies beach parties in the Carmel region. The petitioners asked the court to protect them against municipal inspectors who kept fining them for keeping their equipment near the sea. The petitioners claimed that they only set up tents and other moveable items, none of which are permanent and prevent the public from enjoying the environment. They argued that the beaches where they were operating were never declared by the Carmel Regional Council as official bathing spots.

Rejecting these arguments, the court ruled June 15 that the beach was in principle a public resource, and as such, no commercial activity should take place there without authorization. No businesses may infringe on the public's right to enjoy the beaches, and there must be no activity that generates vehicle traffic bringing in equipment and certainly nothing that generates significant sound or light or produces more trash than general public usage.

The court referred to another argument by the Justice Ministry on the protection of nature in the Neve Yam stretch of beach, near the Bonim nature reserve, where many tents were removed by inspectors. Once the tents and other event supplies were gone, the Ministry of Environmental Protection reported an increase in the number of sea turtle eggs laid there, clear proof that human activity had been damaging the turtles’ habitat and of the need to protect it.

The ruling has enabled the authorities to continue enforcing regulations against keeping commericial equipment on the beaches for extended periods. Tents erected for events and celebrations will not be tolerated, nor equipment such as loudspeakers, light systems refrigeration units, cooking facilities, chaise lounges and other structures.

Israel’s Mediterranean coastline is about 200 kilometers (120 miles) long. A third of it is taken up by the Haifa and Ashdod ports, desalination plants, the Herzliya and Ashkelon yacht marinas, electricity plants, army bases and other sensitive infrastructure. Little space is left for the Israeli public, with only 10% of the coastline is considered beaches for public use. Add to the equation the tourists who normally come to Israel all year long to enjoy the sea and sun, and crowded beaches are the result.

The decision of the court was a small victory it what seems an endless battle to preserve the Mediterranean coastline. Another such victory was marked in January. After a decade of legal battles, the District Court in Lod ruled against the construction of a holiday resort and a conference center on Palmachim Beach in the south of Israel between Ashdod and Bat Yam. The developers received permission for the construction in 2004, but the court decided that the public interest superseded that of the developers. Judge Zvi Dotan wrote in his ruling that the project would have been a “tragedy for generations,” causing irreversible damage to the environment. The ruling means the area south of Kibbutz Palmachim and adjacent an existing beach nature reserve could now be declared a national park.

The battle over Palmachim Beach united environmental activists with social justice activists. While the environmentalists battled to preserve one of Israel’s most beautiful white-sand beaches, the social activists demanded that the coastline be given back to the people instead of falling into the hands of entrepreneurs.

Another contested project is a 2019 initiative to build several new marinas along the coast. The newest version of the plan now being promoted by the government envisions the construction of five new marinas and the expansion of eight existing ones by 2040, aiming to increase the number of docks for private yachts from 2,900 to 7,600. The Society for the Protection of Nature in Israel (SPNI) says that the project is likely to irreversibly damage marine and coastal wildlife and that several other options are open for municipalities wishing to offer sailing and other activities. Seaside promenades could be further developed and point-specific sports equipment installed instead of rushing into giant marina-digging projects. The existing Herzliya and Ashkelon marinas could also be expanded to offer more docking spots.

The reopening of Israel’s beaches on May 20, after weeks of closure over the coronavirus pandemic, brought thousands of Israelis back to the seaside. Activists worry that the entrepreneurs and municipalities behind the marina project will now redouble their efforts to advance it. An SPNI activist told Al-Monitor that the campaign to block the plan are among the organization's most significant efforts. Speaking on condition of anonymity, the activist said, "The whole world now shies away from the sort of infrastructure projects that were so popular in the 1980s and 1990s. We are smarter nowadays, and we know how destructive these projects really are in the long run. Let’s hope that the new minister of environmental protection stands firm against the big market forces pushing for this project to be realized."