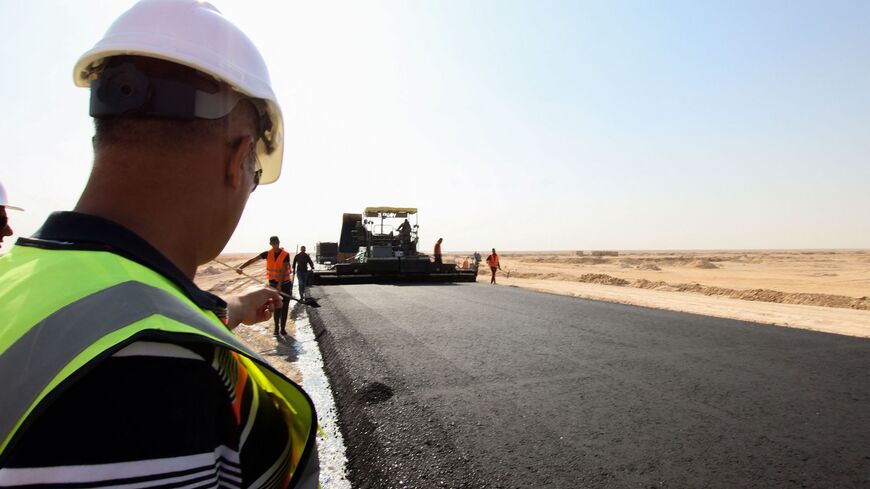 Workers pave a road as part of a project in the central Iraqi Najaf governorate, of a land route that will link Najaf to Saudi Arabia, on Nov. 6, 2021. - ALI NAJAFI/AFP via Getty Images

Iraqi Prime Minister Mustafa al-Kadhimi traveled to Saudi Arabia June 25 for a short visit before heading to Tehran the next day.

The trip was reportedly designed to push talks between the two regional foes forward. Iraq has already hosted five dialogue sessions between Saudi and Iranian officials, most recently in April.

The dialogue efforts have counted some achievements, including the cease-fire in Yemen and Iranian pilgrimages to Saudi Arabia.

Ties between Saudi Arabia and Iran have been unstable since the Islamic Revolution in Iran in 1979. The two countries tried to normalized relations many times but sharp differences in regional policies and ideology remain.

The relationship was officially severed in 2016 after an attack on the Saudi Embassy in Tehran followed the execution of Shiite cleric Nimr al-Nimr.

Since it started in late 2014, the Yemen war has worsened the situation. Saudi Arabia stood with President Abed Rabbo Mansour Hadi, leading a military coalition against the armed Houthi movement, which is backed by Iran. The conflict led to several attacks on Saudi sites such as the Saudi oil company Aramco and the Jeddah airport.

Since he came to office, Kadhimi has worked to bring the two countries to the negotiating table in an effort to reduce tension between the tension in the region. Baghdad had hosted five rounds of negotiations as well as made efforts to mediate between Iran and other Arab countries.

In a press conference, Iranian President Ibrahim Raisi emphasized supporting the armistice in Yemen and strengthening efforts to establish peace there, as well as stressing that a peaceful solution to the crisis should reflect the will of the Yemenis.

Raisi also praised Iraq's role and efforts in promoting calm in the region.

A day after the trip, the spokesperson for Iran's Foreign Ministry announced talks with Saudi Arabia would soon resume in Baghdad, adding, “The relationship with Saudi Arabia will be important to the region and the Islamic world.”

Iranian Foreign Minister Hossein Amir-Abdollahian expressed his full support for the mutual reopening of embassies with Saudi Arabia and appreciation for Iraq's role in promoting dialogue between the two countries.

Al-Monitor has learned that the next meeting will be most likely held between high-ranking diplomats from the two countries. The previous meetings were held by officials from intelligence services of the two countries.

The crown prince has expressed his willingness to normalize relations with Iran. “Iran is a neighboring country and we aspire to have a good relationship with it,” he said last April in a TV interview with Al-Arabiya. “We want to see Iran a prosperous and developed country," he said, adding, "We have mutual interests in our countries that should be used to push the region toward development and prosperity.”

Iraq has been invited in a summit mid-July in Riyadh that will include US President Joe Biden and focus on regional security, energy, food security and stability.