The deaths followed the assassination three weeks ago of an IRGC colonel, which Tehran has blamed on Israel. 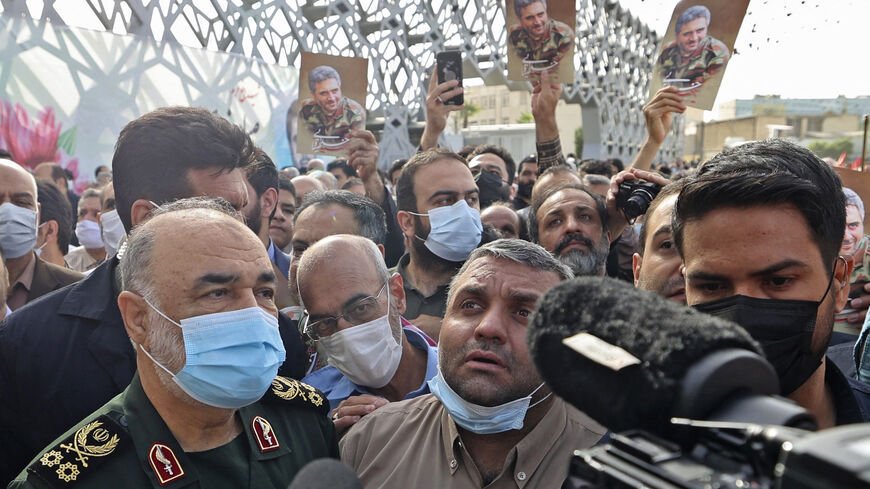 Two officers from aerospace units within Iran's Islamic Revolutionary Guard Corps (IRGC) and the country's Defense Ministry have been killed, according to official statements by the two institutions.

Identified as Ali Kamani and Mohammad Abdous, the men died in separate incidents in Markazi and Semnan provinces, respectively. Providing few details, the statements confirmed that the pair were "martyred while on duty."

Aerospace departments in both organizations are closely involved in Iran's controversial missile program, considered by Western powers and Israel as a growing threat to regional and global security.

The "martyr" designation and the nature of the coverage of the deaths fueled speculation of an Israeli role, particularly as they followed a chain of recent similar attacks in which the Islamic Republic has implicated its archenemy.

On May 22, Iranian Col. Hassan Sayyad Khodaee was fatally shot outside his central Tehran home. The 50-year-old officer was serving with the Quds Force, a branch of the IRGC tasked with overseas missions.

Around the same time, state media reported the death of Ali Esmailzadeh "due to an incident in his home," some adding that he fell off his balcony without elaborating further. However, opposition sources and foreign-based Persian-language outlets claimed that the colonel had been "removed" by the IRGC over allegations that he was involved in passing key intelligence to Israel for the earlier assassination of his colleague, Khodaee.

The chain of the attacks is not without precedent. Iran has long accused Israel of "sabotage" against its key nuclear facilities as well as the assassination of at least four top nuclear scientists in Tehran between 2007 and 2010. In December 2020, Iran's top missile man, Mohsen Fakhrizadeh, was also gunned down in what has been described as a "highly sophisticated" operation that cut off his way home from his weekend private villa outside Tehran.

Striking a nerve among Islamic Republic authorities, the latest attacks have reignited the typical war of words against Israel. On Monday, spokesman for the Iranian government Ali Bahadori Jahromi threatened Israel with "reciprocation." Despite making no direct reference to the latest deaths, Bahadori Jahromi spoke of Iran's "necessary measures" against Israel in protection of its citizens.

Mohsen Rezaee, a former IRGC commander and currently a senior member of President Ebrahim Raisi's administration, also issued a harsh warning last week. "We wish for Israel to dare make a misstep and provide us with a pretext to wipe it off the face of the earth."