Hamas’ use of excessive force to displace Bedouins angers Gazans

Public and official anger could be felt in Gaza after Hamas security forces attacked the residents of the Bedouin village of Umm al-Nasr, north of Gaza, to forcibly displace them and demolish their homes under the pretext that they do not own these houses. 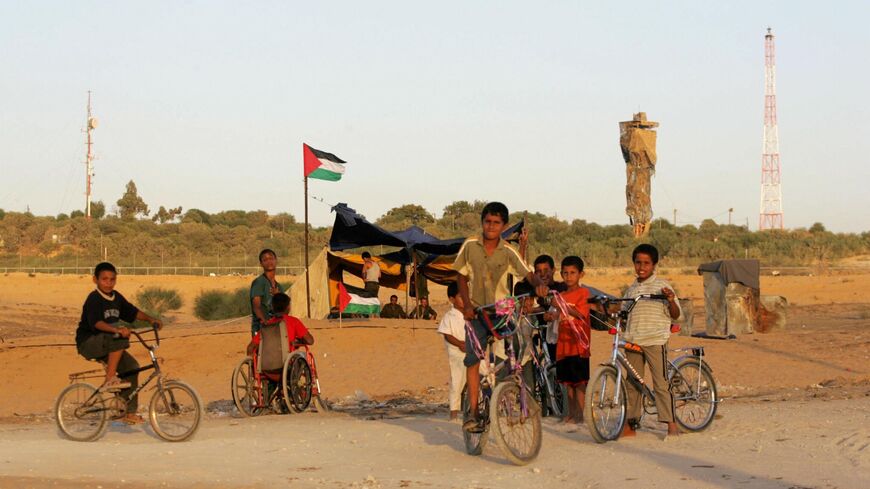 The children of a Bedouin family play near to the tent of Palestinian security members in the village of Umm Al-Nasr, north of the Gaza Strip, on Aug. 2005. - AWAD AWAD/AFP via Getty Images

Hamas security forces attacked houses in the Bedouin village of Umm al-Nasr in the Gaza Strip, fired in people’s direction, and arrested many.

Videos and photos from the villagers populated social media and showed Hamas security forces using excessive force against young men, who were protesting and threw stones at security forces in response to an attempt to demolish one of the houses. The security forces fired on the men and injured some of them.

Umm al-Nasr is located in the far north of the Gaza Strip, near the border with Israel. It is considered one of the largest Bedouin population hubs in the district, with more than 5,000 people living on ​​800 dunams (about 200 acres). For many years, the villagers lived in unsafe houses made of tin and timber, and the government in Gaza prevented them from building concrete houses on the grounds that they did not own the land.

Human rights and civil society organizations condemned Hamas’ attack on the villagers. The Independent Commission for Human Rights in Gaza denounced the excessive use of force by Hamas members, in addition to the destruction of the villagers’ homes. The organizations called for the immediate release of all detainees, and the repair of the damage caused by the security forces.

The NGO Network in Gaza said that the incidents targeting Bedouin villagers in Umm al-Nasr are unacceptable, and all the aggressors must be held accountable. Authorities can help by ensuring adequate housing for these families, especially in the border areas to boost their resilience, the network said.

Hamas recently opened the file of old lands, as part of a campaign to banish encroachments, in light of the increasing population and some people’s attempts to sell land plots. Hamas aims at constructing housing projects and distributing areas to employees in lieu of their accumulated financial dues. But the residents of these areas often insist on staying due to lack of other alternatives.

Rifaat Abu Sa’ada, an inhabitant of Umm al-Nasr, said, “We were surprised to see heavily armed Hamas security forces raiding the village with bulldozers for demolition. Hamas encircled the village entrances without prior warning, unlike the normal way of doing things around the world.”

He told Al-Monitor that the security forces violently assaulted women, young people and the elderly, in addition to shooting directly at them, after they stood in front of bulldozers that were trying to demolish houses at the entrance to the village. The villagers attacked the security forces after many were injured with live bullets, and ambulances were prevented from transporting the injured, who were instead taken in civilian cars.

He pointed out that Hamas security forces are still surrounding the village from all entrances. Village residents have obstructed attempts to demolish a number of houses inside the village, and senior village leaders have refused to hand over any of the citizens.

Meanwhile, human rights defender Yousef Abdel Aziz denounced the attempts of Hamas security services to displace Bedouins in remote areas of Gaza with the aim of seizing their lands, distributing them to employees, and establishing government projects.

He told Al-Monitor, “The Bedouin villagers of Umm al-Nasr live in very difficult conditions, as their homes do not protect them from the cold of winter or the heat of summer, and insects and diseases are very widespread inside the village, due to the presence of a number of sewage basins.”

He indicated that Hamas security forces are acting like Israel, which has displaced Bedouins in Khan al-Ahmar and Palestinian villages in the West Bank. This only encourages Israel to persist in its policy of displacement and ethnic cleansing against Palestinians.

He called on the Hamas government to immediately reverse its policies of displacing the Bedouin population and using force against them. He said it threatens the social fabric and perpetuates the suffering of the residents of these marginalized areas, who lack the minimum necessities of life due to the absence of government support.

The head of the Follow-up Committee on Governmental Work in Gaza, Issam Al-Daalis, issued a decision to hold all the aggressors from the security forces accountable, and to take into account the conditions of the poor in the region while seeking to provide them with adequate housing.