Lead figures in the Assad regime’s Qatirji oil-smuggling network were among those sanctioned. 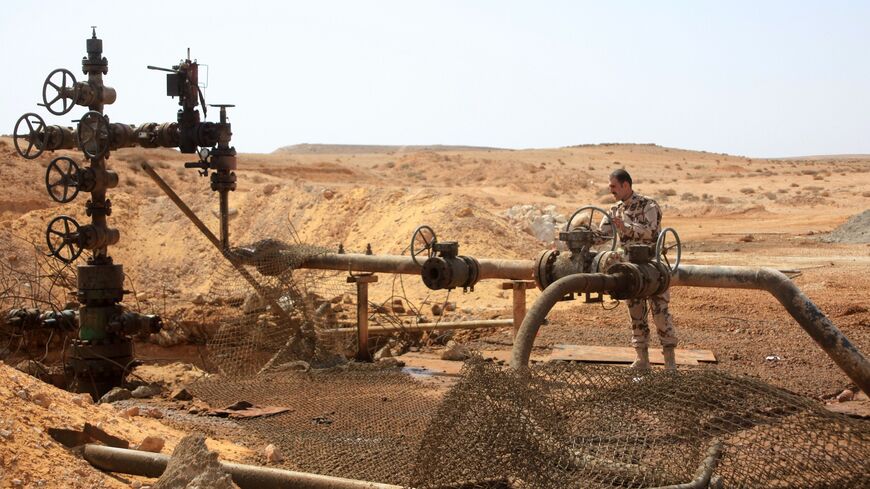 A member of the Syrian government forces stands next to a well at Jazel oil field near the ancient city of Palmyra in the east of Homs province after they retook the area from Islamic State fighters on March 9, 2015. Recent US-led coalition air strikes have frequently targeted oil facilities run by the IS group jihadists, who according to some estimates earn more than $1 million per day from oil sales. - STR/AFP via Getty Images

Among them were Hossam and Muhammad al-Qatarji, lead members of the Syrian regime’s oil trade network with the Islamic State (IS) who were previously sanctioned by the United States in 2018.

Why it matters: Washington has long pressed GCC states to crack down on terror funding networks that use their institutions, with mixed success.

All of these entities were previously sanctioned by the United States, but the TFTC’s marks a sign of some progress in recent years’ efforts.

“Over the past five years, TFTC member states have addressed a broad range of terrorist financing activity in the Arabian Peninsula, with the goal of strengthening regional defenses and capabilities to counter terrorist financing,” US Undersecretary of the Treasury for terrorism and financial intelligence Brian Nelson said in a statement released following yesterday’s meeting in Riyadh.

“The TFTC’s actions today signal the determination and commitment of TFTC member states to continue to work toward these goals, as well as unity in the commitment to root out the full scope of terrorist financing activity,” Nelson said.

The move comes just three months after the world’s leading financial watchdog, the Brussels-based Financial Action Task Force (FATF), downgraded the UAE to a grey list for failing to adequately crack down on terrorist funds flowing through the Gulf country.

The Biden administration raised no objection to the FATF’s decision, a US official told Al-Monitor.

Know more: Read up on the latest US sanctions targeting a Hamas funding network operating in Turkey, Saudi Arabia, Algeria and the UAE.