Most of Tunisia’s sectors were paralyzed June 16 due to the general strike called for by the country’s largest and powerful trade union to pressure the government to respond to the workers’ demands. 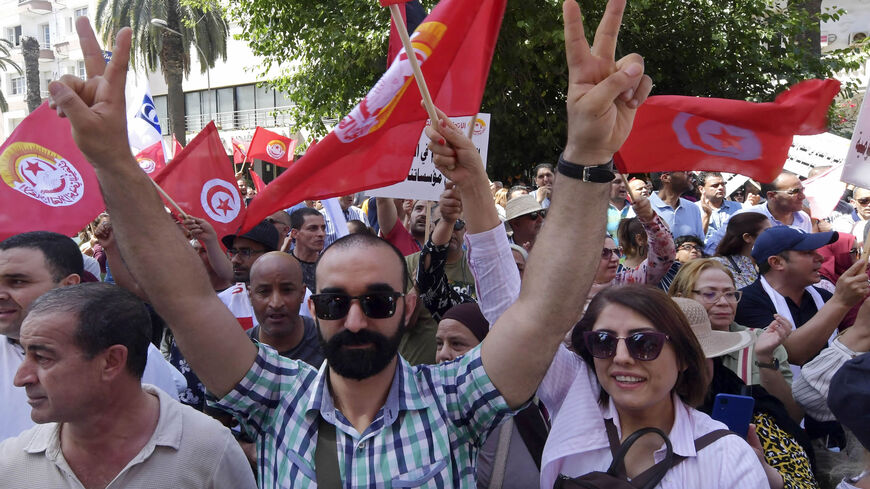 Supporters of the Tunisian General Labour Union gather with national flags during a rally outside its headquarters, amid a general strike announced by the UGTT, Tunis, Tunisia, June 16, 2022. - Fethi Belaid/AFP via Getty Images

These measures include freezing public wages and reducing subsidies, which the government hopes will lead to an urgent $4 billion loan agreement with the International Monetary Fund (IMF).

The general strike paralyzed traffic across Tunisia after heavily disrupting all forms of public transport.

Speaking at a workers rally June 16 in Tunis, UGTT Secretary-General Noureddine Taboubi said that 96.22% of the union’s members participated in the strike, calling on the government to adjust the public sector employees’ purchasing power and raise their salaries.

On June 1, government spokesperson Nasrredine Nsibi told Al-Watania channel that the strike will cost the economic institutions, both in the public and private sectors, a lot, and noted that the government does not want to give the UGTT false promises.

Salah al-Din al-Salmi, UGTT assistant secretary-general, told Al-Monitor that the ruling party did not meet the workers’ minimum expectations, and condemned what he described as “the demonization of the UGTT.”

He said the union will remain steadfast thanks to the people coming from all sectors and their commitment to the union’s decisions.

The powerful UGTT, which also includes government institutions, had previously held another national strike in the government sector and the public administration May 31. According to a UGTT statement, the workers are demanding that the government keep its end of the previous agreements signed with the union regarding the regularization of the employees’ statuses and salary increases. The agreement had also called for engaging in social negotiations to improve the Tunisians’ purchasing power.

Moncef Bou Azazi, member of the political bureau of the People’s Movement party, which is close to President Kais Saied, told Al-Monitor that the general strike is a way of labor action and struggle that has been in place for a long time.

However, he said that the UGTT is trying to prevent the signing of agreements with the IMF in the future, by demanding the reversal of certain measures and reforms required by the international lending institution.

In the same vein, trade union confederations from several countries, including from France, expressed support for the UGTT in its general strike in 159 public institutions and establishments.

Also, five Tunisian parties — namely the Democratic Forum for Labor and Liberties, Republican Party, Workers Party, Democratic Current and Democratic Modernist Pole, which are all part of the opposition — expressed in a joint statement their support for the general strike observed by the UGTT.

The statement blamed the government for the ongoing worsening living conditions, price increases and scarcity of many basic consumer items.

Ramadan bin Omar, spokesperson of the Tunisian Forum for Economic and Social Rights, told Al-Monitor that Tunisia is likely to witness social tension this summer, although he expects some understanding to be reached between the disputing parties.

He noted that Tunisians have become drained by the economic, social and political conditions, as well as by the poor government performance over the past 10 years.

He added that the general strike is a milestone for both the UGTT and government; the UGTT flexed its muscles and underscored its heavy popular weight that contributed to the strike’s success, while the government demonstrated strength by showing its indifference, he said.

The general strike in Sfax governorate, 270 kilometers (168 miles) southeast of Tunis, was organized under the slogan of “Day of Rage.” On June 2, the regional trade union in Sfax held another general strike, demanding that the government find a radical solution to the waste crisis in the governorate that has been ongoing for nine months and resume the stalled development projects.

Political analyst Muhammad Bouaoud told Al-Monitor that the UGTT had tried to communicate its demands with the government through dialogue, but the government did not show a willingness to find any solution.

Thus, Bouaoud said, the trade union found itself compelled to take escalatory measures so as to pressure the government to change its social policy, amid steep price hikes, rising unemployment rates and lower purchasing power.

On June 19, the National Salvation Front announced a protest in downtown Tunis “in support for the freedom values and to defend the democratic gains of the Tunisian people and state from the risk of absurd disintegration practiced by the July 25 coup authority,” in reference to Saied’s suspension of parliament and dissolution of the government.