As the Tunisian General Labor Union works to achieve the demands of Tunisian employees, it faces accusations of overpowering the government. 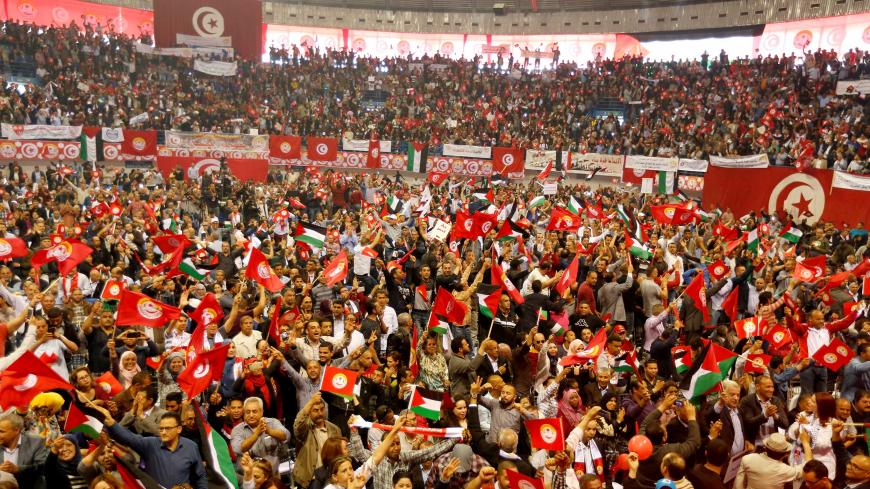 Members of the Tunisian General Labour Union (UGTT) hold signs and wave flags during a rally to mark a Labour Day, in Tunis, Tunisia, May 1, 2018. - REUTERS/Zoubeir Souissi

Meanwhile, the Syndicate of University Teachers and Researchers, affiliated with the Tunisian General Labor Union (UGTT), decided May 5 to keep refraining from drafting the exam subjects of the first and second semesters despite an agreement reached March 12 with Tunisia’s Ministry of Higher Education and Scientific Research that led to the approval of a number of pedagogical and social privileges for university professors.

While university professors have been on strike since January and are calling for the implementation of a salary scale, Noureddine el-Salmi, the deputy minister of higher education and scientific research, said in a statement to Tunis Afrique Presse May 15 that presidents of universities would charge a committee of professors to prepare the needed exam subjects instead of the striking professors.

Also, the Ministry of Health responded to all of the demands of the Tunisian Organization of Young Doctors, a trade union organization, in accordance with a March 24 agreement between the parties.

The organization had started a protest March 5 against “the failure of the Ministry of Health to meet a number of their demands,” which include the swift issuance of a government order concerning the special statute of in-house and resident doctors.

These developments come at a time when several parties, such as the ruling Nidaa Tunis and the opposition Afek Tounes, are accusing the UGTT of working as a political party that protects the interests of certain political parties while disrupting the interest of the country.

Trade unions affiliated with the UGTT had raised Jan. 14 the bar of their demands as they called for higher salaries and wages, and better benefits.

Ibrahim al-Omri, a professor of political science at Tunis El Manar University, told Al-Monitor that the Tunisian government is working for the UGTT’s benefit and is obliged to respond to its demands after the UGTT was granted several ministerial portfolios.

Former Minister of Public Functions Abid Briki is one of the most prominent UGTT leaders who filled a ministerial post, and Mohammed al-Trabolsi, a UGTT leader, was appointed minister of social affairs in August 2016.

Omri said that the tough economic situation plaguing Tunisia has weakened the state and led trade unions to overpower it. He added that after it was granted ministerial posts, the UGTT dominated political life and became active at the political level, and not only at the unionist and social levels.

Boualie Moubaraki, the assistant secretary-general of the UGTT for management and financial affairs, told Al-Monitor that the UGTT played its national role in light of the ruling parties’ poor management of public affairs.

He said that the UGTT is not looking to achieve any political or partisan gains, and noted that the accusations whereby the UGTT is domineering the state and imposing its authority are false and unfounded.

The UGTT decided May 8 to suspend the membership of trade unionists working at the two state-owned railway and navigation companies due to their disruption of the work activity of these companies and the random strikes they organized against the delayed payment of wages and the lack of the necessary work equipment.

Sami al-Tahiri, the assistant secretary-general of the UGTT for media and publication affairs, said in a statement to the state’s Assabah News May 8 that the membership suspension decision came against the backdrop of the employees’ repeated and uncoordinated decisions to stop working. These decisions, he said, harmed the interests of both the state institutions and the citizens. He stressed the UGTT’s rejection of random decisions to stop working.

In a speech on the occasion of the 62nd anniversary of Internal Security Forces Day held at the Ministry of the Interior on April 18, Minister of Justice Ghazi al-Jaribi confirmed the need to fight laxity, respect the law and protect public order and national security because in an atmosphere of laxity, it is impossible to guarantee the sustainability of a democracy. He called for respecting the stature of both the state and the law.

Assistant General Secretary of the Secondary Education Union Fakhri al-Sumaiti told Al-Monitor that having trade unions is necessary to defend workers, as the state has burdened them with price increases. Oil prices were increased April 1, while prices of medicines were increased Jan. 3.

“The state is headed toward impoverishing the middle class, which has been eroded due to bad economic choices exemplified by the rise in commodity prices and the sale of state institutions to the private sector,” he said.

Sumaiti noted that trade unions did not ask for the impossible. They only asked, he said, for the good management of the economic situation, for improving the financial conditions of workers and for holding both senior officials and smugglers to account.

Fatima el-Massadi, member of parliament for Nidaa Tunis, told Al-Monitor that the unions affiliated with the UGTT have domineered the state through the weak state institutions produced by the "troika" government, a government coalition that ruled Tunisia between Nov. 22, 2011, and Nov. 20, 2014.

Massadi said that the UGTT is trying to exploit the weakness of the state in order to become the first force in the country, and that this is harming the Tunisian economy.