An all-female spa and salon in the conservative Gaza Strip is offering belly dance courses as a breather for women, but not everyone was happy about it. 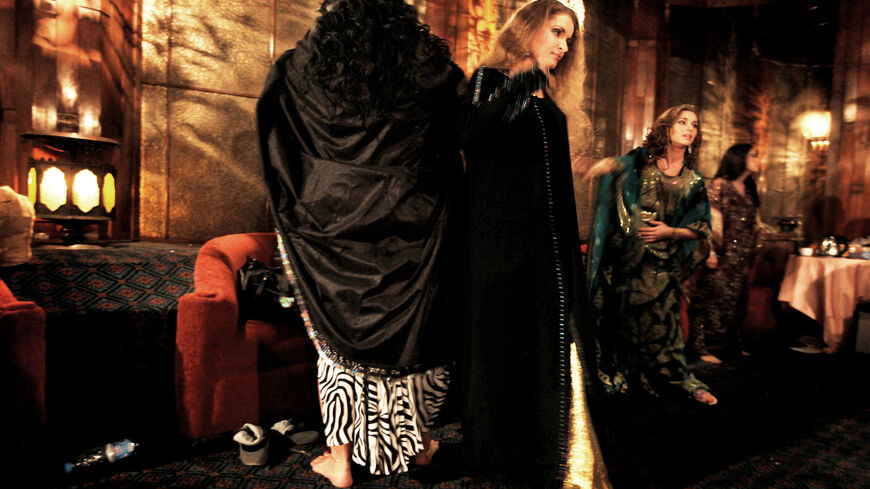 Russian belly dancers warm up before performing at a belly dancing school in the Egyptian capital Cairo on Dec. 12, 2012. - PATRICK BAZ/AFP via Getty Images

GAZA CITY, Gaza Strip — At five o'clock in the afternoon of a quiet spring day, the secretary at the Soleil women’s salon and spa in Gaza received a phone call from a man booking his wife a spot in a belly dance course.

The secretary has been receiving many such calls from men interested in enrolling their wives. Men are not allowed to enter this all-women spa and the only contact they can make is via phone.

Soleil is the first women's spa in Gaza that offers a variety of health, relaxation and beauty treatments for women. The all-female staff of 10 offers aesthetic treatments and classes. The spa also has a gym and a social club.

On the floor dedicated to the Soleil Training Academy, women are taught belly dancing by a professional belly dance instructor. Some clients, especially those who are about to get married or are exploring belly dance as a way to get fit and lose weight, prefer to take private classes.

One of them, 22-year-old Hanadi (a pseudonym), told Al-Monitor that her mother pushed her to enroll in this course as her wedding date approached. “My mother told me I should learn belly dancing before my wedding day to avoid being embarrassed. I chose to take private sessions since I am shy and I don’t want other women to see how bad my dancing is. I don’t want to be bullied.”

Al-Monitor spoke to Soleil's manager Rawan al-Katari, who founded the spa in 2018. She explained that belly dance classes are its most popular service, especially during the last two years, when turnout jumped by 50%.

“Women in Gaza see dancing as a means of psychological discharge in addition to an exercise for weight loss,” she said. “Women’s perception of the importance of fulfilling the desires of their husbands has changed. Marital incompatibility is bringing up divorce rates in Gaza. In 2021, divorce cases increased by 23.6% compared to 2020.”

Katari said the internet has brought a degree of openness to Gazan society. “Many young people are traveling to Turkey and other foreign countries. Their exposure to other cultures triggered a cultural change in society. Open-minded young married couples are struggling in Gaza’s conservative society.”

She explained that she first considered opening the spa in 2014 after Israel's Operation Protective Edge, when she started searching for a way to provide women in the Gaza Strip with psychological, health and aesthetic comfort and support.

Katari admits that the staff has face criticism from the public and that the spa has been criticized for running what detractors call a dance academy, the kind of institution few residents would approve of. The attitude is clear in the comments on the spa's social media posts about the belly dancing course.

"We are not offering anything contrary to social values in Gaza. We are only providing women with entertainment without breaking the society’s customs and traditions. The place is an all-female facility. We would never allow ourselves to commit any obscene acts,” she added.

Meanwhile, 30-year-old Ahlam, a pseudonym, criticized the courses in a street interview with Al-Monitor. She associates this type of dance with revealing outfits and loud music, which are viewed as contrary to Islamic law. She also does not feel that dance classes are appropriate amid the current poverty and suffering in the blockaded enclave.

“I was provoked by the social media post on the dance courses, which showed the dance instructor looking indecent,” she said.