Mabrouk Attia's remarks stirred anger and controversy in Egypt after the killing of a female university student who refused a marriage offer. 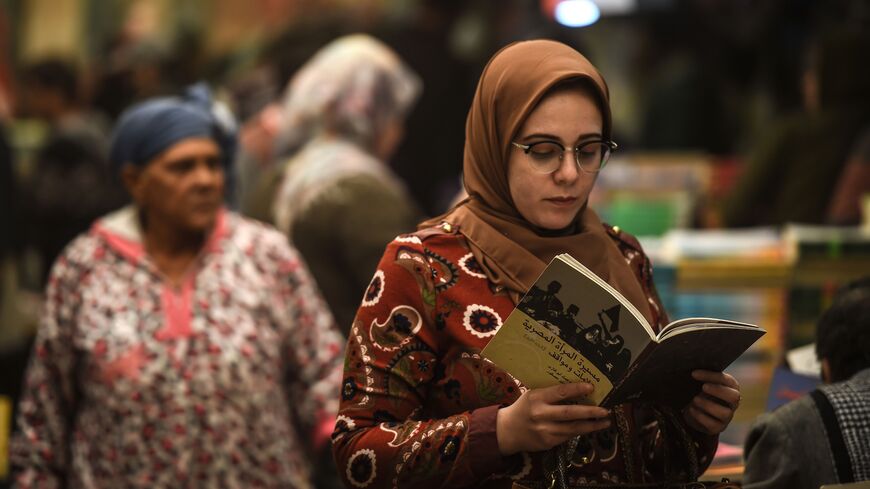 A woman looks at a book at Cairo's historic al-Azbakeya book market at downtown in Cairo on Jan. 16, 2019. - MOHAMED EL-SHAHED/AFP via Getty Images

Renowned Egyptian scholar Mabrouk Attia stirred anger and controversy in Egypt after his comments following the killing of a university student by her colleague because she refused to marry him. In a video he posted on his Facebook page, he advised the girls and women to wear the hijab and cover their body in order to live.

Attia said, “So leave your hair touching your cheeks and wear tight clothes, then you will be mesmerized by a harasser who will kill you. The woman should wear a hijab to live and should wear broad clothes to not tempt youth.”

“If your life is precious to you, get out of your house wearing a veil. As in case you were seen by a man who has no money to marry you, he will kill you.”

Al-Azhar University slammed Attia’s comment and confirmed that Attia did not speak for the university.

Egypt’s Dar Al-Ifta stated, “It is the duty of scholars to choose the appropriate method in the appropriate event. The scholars should not blame people for any shortcomings at a time of calamities.”

The National Council for Women condemned Attia’s comment and submitted a report to the Attorney General. Its head, Maya Morsi, said “We want to stop hate speech, hostility and terrorism. You came out to us, Sheikh Mabrouk, with a speech that terrorized the girls and women of Egypt. No appearance or clothing justifies a crime. We have a law that protects us and a justice system that protects us, and we will demand that the law be enforced.”

She added:“Such words are contempt for women and incitement to violence and murder against them, which is a crime punishable by law.”

TV presenter Radwa El-Sherbiny said on Twitter: "You advised women to wear the veil, not in order to please our Lord, but in order not to be killed? And this is your opinion of religion? Is this a fatwa and justification that the one who is not veiled can be killed!”

The hashtag #Mabruk_Attia_trial took the lead on Twitter in Egypt. A Twitter user, Amira Gaber, wrote “And now the main problem is in hijab?!!! You should wear a hijab or be killed! I’m really shocked with everything that goes around, I can’t believe that we’re living in a scary world justifying crimes and blaming the victim for what she wears?!”

Abdullah Al-Najjar, a member of the Islamic Research Academy, said that Attia’s statements reflect a negative image of men in Islam.

He said on a local TV channel, “Is the image of a man in Islam that he harasses a woman? The Holy Qur’an urges people to lower their gaze…. So the women's attire is none of men's business.”

Attia's original comments were in response to a shocking video clip of a student at Mansoura University named Naira Ashraf, who was stabbed to death by another student in front of the University. An eyewitness said that the accused tried to escape, but some students caught him and within moments the university security came and tied his hands behind his back.

According to the victim's sister, the deceased received threatening messages two days before the incident, but didn't take the matter seriously.

Samia Khedr, a professor of sociology at Ain Shams University, told Al-Monitor that Attia should advise people rather than justify crimes.

She pointed out that the state, including the media, should play a role in raising people’s awareness not only of religion but also of culture and humanity. “Young people need to be nourished culturally, religiously, and intellectually,” she said.

On June 23, a heinous murder shook the Jordanian street, when an 18-year-old student was shot inside the Applied Science University, north of the capital Amman.

Users of social networking sites posted a photo documenting the victim receiving a death threat from the offender. The threat stated: "Tomorrow, I will come to talk to you, and if you refuse, I will kill you, as the Egyptian killed the girl today."

Khedr commented, “Humans like to imitate each other. The Jordanian killer learned about the Egyptian incident from social media, which spread like wildfire."

“Those who shot the video of the Egyptian student, why didn't they rush to save her from killing,” she wondered. “Unfortunately, the worst usage of social media is spreading horrible accidents to get more views.”