The Ministry of Housing and Urban Communities in Egypt has put up for sale cemetery lands for Egyptians abroad in four new cities, priced in dollars, as part of the government’s efforts to counter a severe foreign currency shortage. 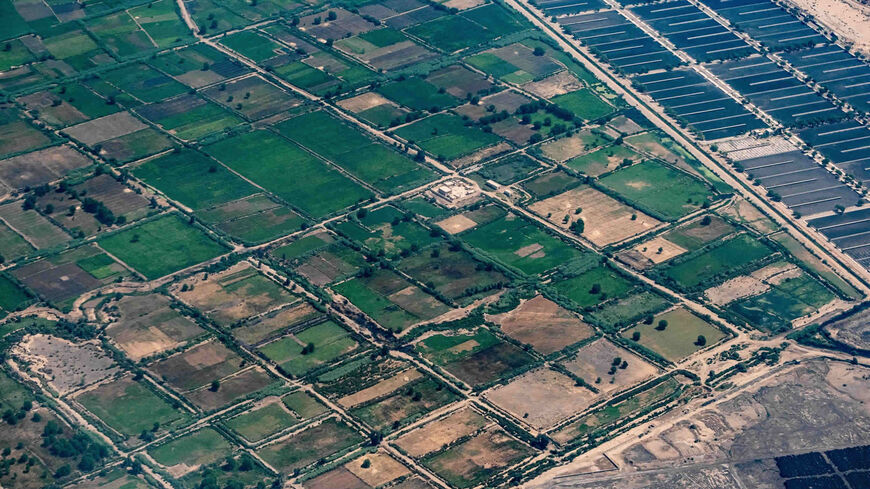 This picture shows an aerial view of farmland near the city of al-Khankah in Qalyoubiyah province in the fertile Nile Delta agricultural region, north of Cairo, Egypt, May 28, 2021. - Amir Makar/AFP via Getty Images

CAIRO — Egypt is currently planning to sell land plots allocated for cemeteries, priced in dollars, as part of efforts to make up for the decline of foreign currency revenues in recent years.

On June 6, the Ministry of Housing and Urban Communities put up cemetery lands for sale for Egyptians living abroad in four new cities — New Cairo, Badr City, 10th of Ramadan City and New October City — as part of the eighth phase of the Beit al-Watan project, which consists of developing land plots in various new urban communities in Egypt.

The plan comes as part of the government's efforts to confront the foreign currency shortage crisis caused by a drop in tourism revenues due to Russia's war on Ukraine. Russian and Ukrainian tourists used to make up the majority of visitors to Egypt before the war broke out in February.

Also, the war has caused a major economic crisis in Egypt. The central bank has raised the interest rate to 3% over the past two months, due to the severe shortage of foreign currency and the decline in cash reserves, to face the high rate of inflation and market stagnation amid soaring prices. As a result, the exchange rate of the Egyptian pound plummeted against the dollar.

A source in the Ministry of Housing told Al-Monitor on condition of anonymity that the new decision was issued in response to the Egyptian expats' requests for lands to build cemeteries in the majority of new cities.

He stressed that the new offering will be paid in dollars. All projects that the state is offering to workers abroad will be purchased in dollars to ensure financial liquidity for the government, especially in light of the crisis the country is going through and the urgent need for hard currency, he noted.

The source pointed out that the Ministry of Housing is always looking for solutions, through the establishment of various projects to bring in hard currency and compensate for the shortage in cash reserves, due to the negative repercussions of the war in Ukraine.

Adel Amer, economist and head of the Egyptian Center for Economic Studies, told Al-Monitor that the decision of the Ministry of Housing to offer lands for cemeteries in dollars for Egyptians residing abroad is a positive step in the search for solutions to confront the severe shortage of foreign currency resulting from the economic crisis due to the negative repercussions of Russia's war on Ukraine.

He said that the success of the Ministry of Housing’s plan will motivate other ministries to play a similar role, in order to help find other solutions to provide hard currency and support the monetary reserve, thus stopping the sharp deterioration of the Egyptian economy.

Amer stressed the importance of the role of the economic ministries in presenting plans and implementing projects that contribute to attracting foreign investment, providing facilities and removing obstacles to gain investor confidence in Egypt. This, he explained, would contribute to providing the hard currency necessary to support the cash reserve to achieve stability, stop the economic collapse, create job opportunities, curb unemployment and reduce economic stagnation.

He noted that it is important as well to increase exports, support the local industry and achieve self-sufficiency in basic commodities to preserve the hard currency and increase the cash reserve.

Meanwhile, Ghada al-Ajmi, member of parliament representing Egyptians abroad, said the Ministry of Housing’s offering of cemetery lands in dollars is an insufficient step to bring in foreign currency and face the shortage of cash reserves.

She told Al-Monitor that Egyptians residing abroad are ready to actively contribute to supporting the national economy of their country, and they will never slacken in offering any support. The remittances from Egyptians abroad are always on the rise, and they have been among the key sources of national income, despite difficult global circumstances, especially during the coronavirus pandemic, she said.

Ajmi called on the government to put forward joint investment projects with Egyptians residing abroad in the education and health sectors, to ensure the provision of hard currency to support the monetary reserves, in addition to increasing investments that boost job opportunities. This would significantly help in achieving economic stability and sustainable development and benefit all sectors, she added.

Ajmi accused the Egyptian government of neglecting Egyptians residing abroad, and of failing to perform its role as it should to solve their problems, provide them with the necessary support and protection, and answer their demands, whether in education, health or other sectors.

She called on the government to pay attention to Egyptian expats, solve their problems, implement their rightful demands and provide them with the necessary support and protection in order to gain their confidence to contribute effectively to supporting the national economy.