Dubai has begun a digital mapping project for a fleet driverless taxis. 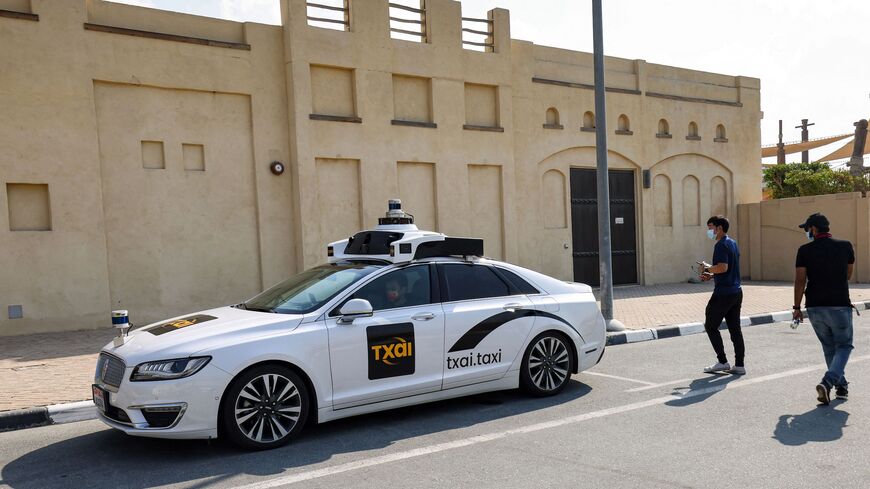 This picture taken on Nov. 30, 2021, shows a self-driving taxis being used in a demonstration in the UAE capital Abu Dhabi, to transport passengers to the nearby Yas Island. - GIUSEPPE CACACE/AFP via Getty Images

DUBAI, UAE — Dubai is preparing to launch its first fleet of “self-driving” taxis in 2023. Vice President Sheikh Mohammed bin Rashid, who announced the plan in May, has set a target of 25% of Dubai journeys to be driverless by 2030.

In early June, the Dubai Municipality announced that its Department of Geographical Information Systems (GIS) has started work on high-resolution digital maps to be used in self-driving vehicles.

Mariam al-Mheiri, former director of the GIS department and current director of engineering and planning for Dubai Municipality, told Al-Monitor that the maps will be “used by companies that provide specialized solutions for self-driving vehicles, which are expected to make up a high percentage of traffic in Dubai in the future.”

Mheiri added, “We are currently working at the GIS department in Dubai, in continuous coordination with partners and stakeholders, most notably the Dubai Roads and Public Transport Authority (RTA), to promote the principles of integration in the preparation of high-accuracy maps. This is to ensure their optimal implementation in accordance with specifications and standards and specific requirements, allowing map users to enjoy an optimal and unique experience.”

She noted that self-driving cars are able to navigate city streets and other less crowded environments by recognizing pedestrians, other vehicles and potential obstacles through artificial intelligence. This is achieved with the help of artificial neural networks, which are trained to see the surroundings of a vehicle and simulate the human visual perception system, she explained.

Researchers at the Cornell Ann S. Bowers College of Computing and Information Science and College of Engineering have developed a way to help self-driving vehicles form “memories” of past experiences and use them for future navigation, especially during adverse weather conditions when the car can no longer rely on sensors safely.

Cars using artificial neural networks have no memory of the past and are in a constant state of seeing the world for the first time, no matter how many times they've been on a particular road before, according to research papers submitted by students in the college.

Speaking for the first time with the media about the project, the CEO of RTA in Dubai, Ahmed Bahrozyan, told Al-Monitor that services will begin at the end of 2023 "with a limited number of self-driving vehicles, up to 10 vehicles in the first phase, to reach up to 4,000 vehicles by 2030.”

He added, “All vehicles will be eco-friendly electric vehicles, in line with the UAE's goals to achieve net-zero and reduce carbon emissions. This technical service will be launched from Dubai and may potentially spread to all areas of the emirate, but the work is currently in progress between the RTA and Dubai Municipality.”

Normally, taxi users hail cabs on the street or use applications of approved companies within the UAE. Bahrozyan said, “The booking and payment will be through a special application for this type of technology, similar to the electronic booking system for limousines or the Hala Service.”

The method is very simple, according to Bahrozyan. When a customer wants to book a taxi, they can open the app and specify their location then pick their destination. A vehicle from the closest car location heads the customer’s way. Through the app, the start and end of the journey will be preset, similar to apps such as Careem, he explained.

Asked about safety concerns, Bahrozyan explained, “The self-driving vehicle ‘Origin,’ which will be launched in Dubai, is designed with the highest levels of safety, as it works entirely through artificial intelligence without human intervention at all. It uses 100 sensors, cameras, lidar and radar systems to create an integrated 360-degree view of the vehicle.”

He continued, “Besides, the vehicle is equipped with the latest communication devices, which allows monitoring of the fleet of vehicles around the clock and communicating with passengers in the event of any emergency or technical failure. It is expected that driving using artificial intelligence will contribute to reducing the rate of traffic accidents because 90% of road accidents in the world are caused by human error. These vehicles also give the opportunity for people with special needs, the elderly, children and all other segments of society to move within the city easily and safely.”