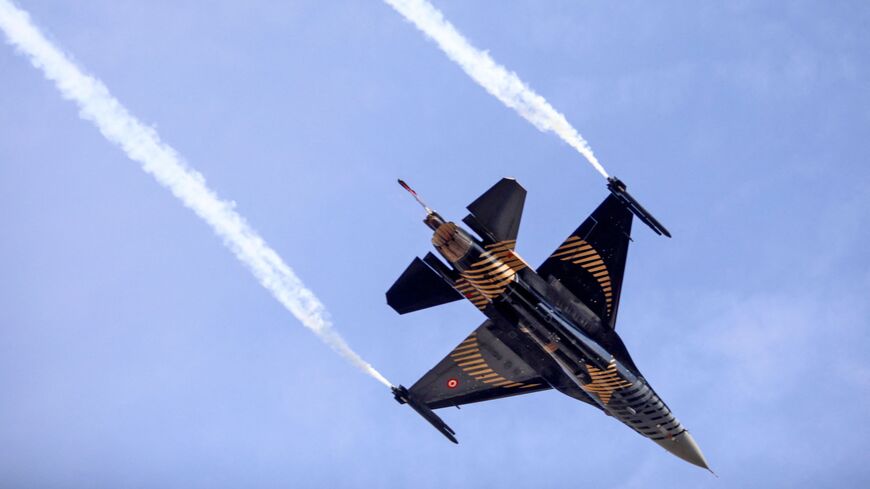 A Turkish Air Force F-16 fighter aircraft of the "Solo Turk" solo aerobatics display team performs aerial maneuvers during the airshow part of the celebration marking the 38th anniversary of the self-proclaimed Turkish Republic of North Cyprus, recognized only by Turkey, in the northern part of Cyprus' capital Nicosia on Nov. 15, 2021. - BIROL BEBEK/AFP via Getty Images

“These are separate questions,” the top US diplomat said during a press conference alongside NATO Secretary-General Jens Stoltenberg in Washington.

Blinken was asked by a reporter whether the United States is willing to export fighter jets to Turkey to facilitate the two Nordic countries’ acceptance into the alliance.

Ankara has reportedly requested readmission to the F-35 program, from which it was expelled in 2019 for purchasing Russia’s S-400 missile defense system, as it threatens to block Sweden and Finland’s admission.

The United States currently plans to sell some 40 F-16s to Turkey and upgrade 80 of its current ones to compensate Ankara for its financial losses due to its expulsion from the F-35 program. That proposal has not yet been formally notified to Congress, where key lawmakers have continued to expressed skepticism.

“We have a longstanding and ongoing defense relationship with Turkey as a NATO ally,” Blinken said. “We’ll continue to work through cases as they arise with regard to systems that Turkey seeks to acquire.”

Why it matters:  The Biden administration appears to be dismissing President Recep Tayyip Erdogan’s apparent maximalist demands out of hand while allowing NATO to take the lead on Turkey’s concerns about Kurdish leftist militancy.

Ankara is demanding that Sweden and Finland extradite alleged affiliates of the Kurdistan Workers Party before the two European countries are allowed to join the alliance. Yesterday Erdogan went so far as to say that the two countries' governments should change their domestic laws to bar expressions of support for Kurdish leftist movements at local demonstrations.

Blinken once again downplayed the dispute on Wednesday, expressing confidence that Sweden and Finland would face a smooth accession to the alliance. NATO’s leadership is doing the same.

“No other NATO ally has suffered more terrorist attacks than Turkey,” Secretary-General Jens Stoltenberg said alongside Blinken today. “Turkey is an important ally, not least because of its strategic geographic location bordering Iraq and Syria … and also a Black Sea country close to Russia.” He added, “When they raise concerns, of course we sit down and we look into how we can find a united way forward.”

“Finland and Sweden are working directly with Turkey. NATO is supporting this effort,” said Blinken, adding, “We very much support those efforts.”

What’s next:  Stoltenberg said today he will host a meeting with Turkish, Swedish and Finnish officials in the coming days to ensure the Nordic countries’ application process moves forward. Erdogan said yesterday he saw little point to such a meeting before receiving “concrete” assurances from the Nordic states.

Know more:  Sign up for Amberin Zaman’s Turkey Briefing newsletter for the latest analysis on the Turkish president's gambit with the West.