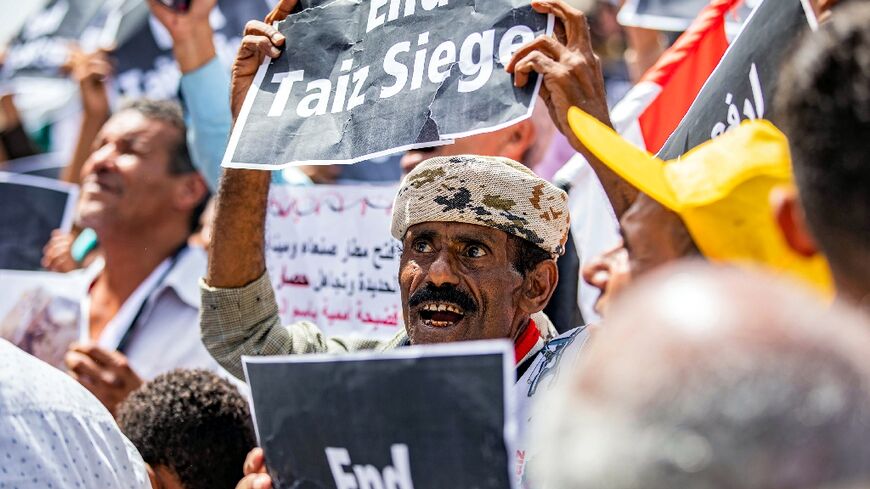 Yemeni protesters on Wednesday called for the lifting of a seige of the country's third city - AHMAD AL-BASHA
Agence France-Presse
May 25, 2022 — Taez (Yemen) (AFP)

Hundreds of protesters in war-torn Yemen marched Wednesday against the years-long blockade of a major city by Huthi rebels, as UN-brokered talks to end the siege started in Jordan.

Among the crowds, which included women and children, some held up signs in English that read: "End Taez seige".

Holding talks to end the blockade was agreed as part of a two-month renewable truce that began in April, and which has significantly reduced fighting in the seven-year civil war.

Taez, which has a population of roughly 600,000 people and lies in Yemen's mountainous southwest, has been largely cut off from the world since 2015, when the rebels closed the main routes into the city.

The Iran-backed rebels seized the capital Sanaa in 2014, triggering a military intervention by a Saudi-led coalition.

More than 150,000 people have been killed and millions displaced, creating the world's worst humanitarian crisis, according to the United Nations.

Taez resident Khalifa al-Samei said that the international community and the UN should "quickly" work to lift the "unjust siege".

"It is a legitimate human right... and according to the terms of the truce agreed upon two months ago," he said. 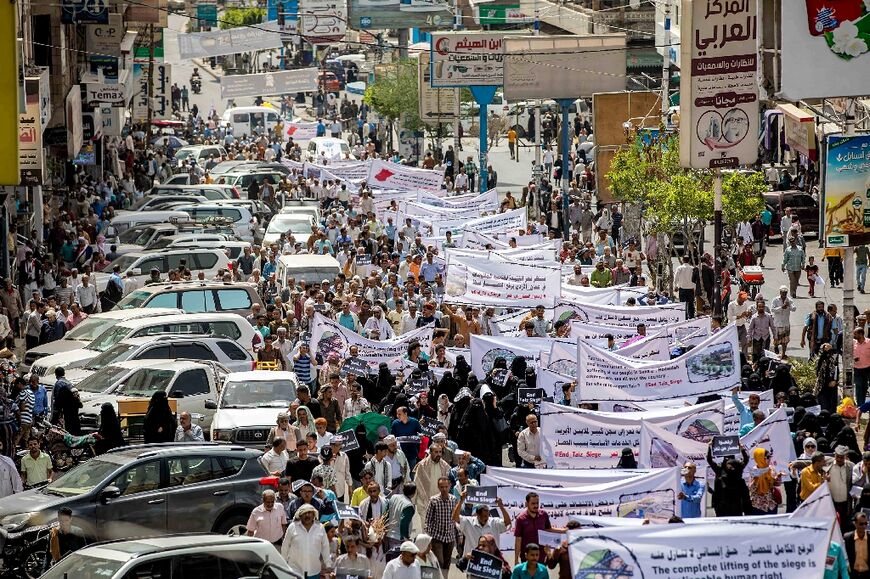 Ishraq Hail, another resident, said the matter must be resolved.

"The opening of the Taez roads will take place either by peace, or by war," she said. "We don't beg".

Talks began in the Jordanian capital Amman between Yemen's internationally-recognised government and the Huthis "on the opening of roads in Taez and other governorates", UN special envoy Hans Grundberg's office said.

Holding the talks was a key part of the truce agreement, as well as other stipulations including the resumption of commercial flights from rebel-held Sanaa and the return of fuel ships to the lifeline port of Hodeida.

Last week, the first commercial flight in six years left Sanaa's airport, which has been blockaded by the coalition. Oil ships have also been allowed to dock in Hodeida.

The talks and protest come a week before the nationwide truce is set to expire, with UN efforts underway to extend it and the Huthis signalling they would be prepared to renew.