Is a water crisis brewing between Turkey and Iran?

Discord over transboundary waters and dam construction emerges as a major factor underlying the strains in Turkish-Iranian ties. 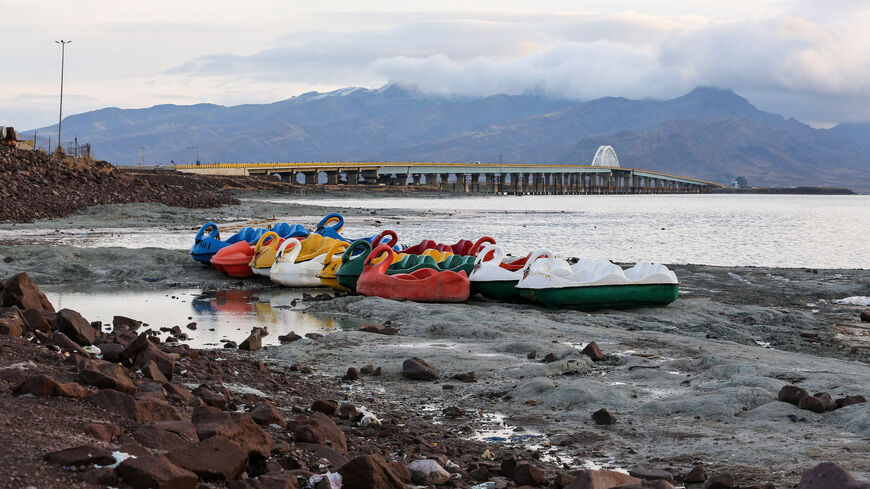 This picture taken on Dec. 8, 2018, shows a general view of recreational boats along the shore of the salt lake of Urmia and Shahid Kalantari causeway crossing it, in the northwest of Iran, which had been shrinking in one of the worst ecological disasters of the past 25 years. - ATTA KENARE/AFP via Getty Images

A row over transboundary waters is simmering between Turkey and Iran, adding to recent tensions over the formation of a new government in Iraq and the control of the Iraqi region of Sinjar. Irked by Turkey’s construction of dams on the Aras and Tigris rivers, Tehran has come to publicly accuse Ankara, cranking up a dispute that has been largely confined to diplomatic channels thus far.

Speaking in parliament May 10, Iranian Foreign Minister Hossein Amir-Abdollahian slammed Turkey’s dam projects as “unacceptable” moves that threaten to reduce waterflows and inflict environmental damage to both Iran and Iraq. Tehran has to “pursue the case through dialogue and bilateral negotiations” since Turkey is not a signatory of the 1997 New York Convention on the non-navigational use of transboundary waters, which prevents Tehran from suing Ankara internationally, the minister said. “We should not allow countries such as Turkey to use the current lack of an international mechanism to change the environmental conditions either in Iran or Iraq,” he added.

Amir-Abdollahian said he had raised the issue with his Turkish counterpart at least three times in recent months — in two meetings in New York and Tehran and during a phone call — and proposed the formation of a joint commission to address the problem. A team of experts from Iran’s foreign and energy ministries held talks in Turkey earlier this year, and a Turkish delegation is expected to visit Iran soon, he said.

The Aras originates in eastern Turkey and flows eastward, forming border stretches between several countries, namely Turkey, Azerbaijan, Iran and Armenia, before joining the Kura River in Azerbaijan. The Tigris also rises in eastern Turkey, flowing south to form border stretches between Turkey and Syria and between Syria and Iraq before merging with the Euphrates in Iraq to form the Shatt al-Arab. Iraq contributes 51% to the water flow of the Tigris, while Turkey contributes 40% and Iran 9%, according to Turkish statistics.

Tehran claims that Turkey’s Ilisu Dam on the Tigris, inaugurated last year, poses environmental risks not only to Iraq but also to Iran. Iranian officials have held Turkey responsible also for dust storms as a result of drought, which they blame on reduced water flows in the Tigris and Euphrates.

Turkey is no stranger to accusations over water, leveled mostly by Iraq and Syria for decades. Foreign Ministry spokesman Tanju Bilgic retorted May 12 that the Iranian claims are “far from scientific,” noting that Africa and the Middle East are the actual origins of dust and sand storms, which have increased due to drought, land degradation, deforestation and desertification as a result of climate change. And on the issue of transboundary waters, Turkey is open to any “rational and scientific cooperation” with Iran, he said.

A Turkish hydropower plant and a dam are already operational on the Aras, while another dam is currently being filled and a third one is under construction. Turkey is building a dam also on a tributary of the Aras, with 25% of the reservoir slated for potable water needs and the remaining for irrigational use.

Iran, for its part, has built joint dams with Armenia and Azerbaijan on the Aras.

Turkish officials blame Iran’s water shortages on its mismanagement of water resources and see Tehran’s accusations as a diversion to quell the growing water grievances of its populace. They argue that thanks to the dams on the Aras and the Tigris, Turkey has been able to increase water flows to levels above normal in times of drought, stressing that accusatory claims are undermining bilateral cooperation.

Tehran may be speaking also for Baghdad in criticizing Turkey, but its own water policies have so much exasperated the Iraqis that they are planning to sue Iran in the International Court of Justice.

Sources knowledgeable of Turkey’s water diplomacy told Al-Monitor that Turkish and Iranian officials meet every three months to jointly measure the water flow from Turkey to Iran at three separate stations — a procedure based on a protocol signed in 1955. Turkey engaged in similar cooperation with Iran and Iraq during the filling of the Ilisu Dam in 2019 and Iraq received water from the Tigris in the process, they said. In 2021, a year marked by drought, the amount of water let to flow down from the dam was double the flow of the Tigris, according to the sources.

They argue that Iran has failed to show a similar concern for its neighbors, pointing — for instance — to a significant drop in the flow of the Karkheh River to Iraq due to upstream Iranian dams, coupled with a dyke bisecting the marshland at the border.

Baghdad and the Kurdistan Regional Government (KRG), which borders Iran, accuse Iran of diverting tributaries of the Tigris at the expense of Iraq. Iran has sought to revive its dying Lake Urmia by transferring water from the Little Zab, while diverting also the waters of the Sirwan River. On the Iraqi side, the water level has dropped by 80% in the Little Zab and by 85% in the Sirwan. In 2020, KRG authorities reported that the flow of Little Zab, which feeds the Dukan dam and on which 100,000 people depend for water, was completely cut. Tehran argues that its water activities are legitimate given that both rivers originate in Iran.

Arif Keskin, a Turkish researcher specializing in Iran, contends that the water issue underlies many problems between Ankara and Tehran, including “Iran’s facilitation” of the illegal passage of Afghan refugees to Turkey.

“Iranian officials try to portray Turkey’s dam projects as the main reason of drought not only in Iran but also in Iraq and Syria. Some have even accused Turkey of the uprising in Syria, which was underlain by the drought factor. Hence, they draw a link between Turkey’s dams and Iran’s national security,” Keskin told Al-Monitor.

“Iran feels entitled to even change the Aras riverbed but claims that Turkey is not entitled to build so many dams. They portray this also as a conspiracy against Iran,” he added.

According to Keskin, Iran has made serious mistakes in managing its water resources and is now trying to cover this up by diverting popular anger to Turkey. “They do not have any agricultural planning and crop selection based on water resources. They do not use feasible irrigation techniques nor conduct any assessments on the environmental impact of dams. The Revolutionary Guards control the projects,” he said.

Turkey and Iran have come to odds over myriad issues in recent years, from influence wars in Syria and Iraq to refugees and fighting terrorism. The water problem, however, is unlike any other. It holds the potential to escalate and further strain bilateral ties.