Uri Savir, key negotiator in Oslo Accords, passes away at 69

The death of former Foreign Ministry Director General Uri Savir, one of Israel's more creative and relentless peace-negotiators, leaves a void among those who battle for coexistence. 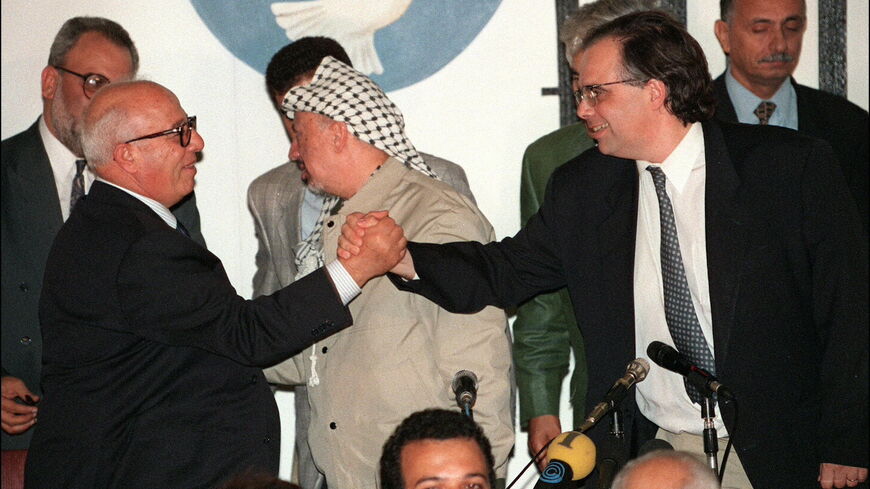 In this picture dated Sept. 24, 1995, Palestinian Chief negotiator Ahmed Qorei Abu Ala (l) shakes hands with his Israeli counterpart Uri Savir (r) at the Taba hotel on the Egyptian shore of the Red Sea after signing historical Taba agreement to extend Palestinian autonomy in the West Bank. Yasser Arafat, chairman of Palestine Liberation Organization (PLO) is in the center. - MENAHEM KAHANA/AFP via Getty Images

Israel’s peace camp is mourning Uri Savir, who passed away on Friday at the age of 69. Best known in Israel for the central role he played in negotiating the Oslo Accords, Savir continued in the post-Oslo years to promote peace and coexistence in different forums, including his writings as contributor to Al-Monitor.

The son of one of Israel’s first diplomats, Savir joined the Foreign Ministry shortly after completing his studies at the Hebrew University in Jerusalem. In the early 1980s, he began his role as a senior associate of then-Foreign Minister Shimon Peres, engaging in contacts between Peres and several Arab leaders. He was involved in organizing Peres' historic 1986 trip to Morocco and a meeting that year between Peres and Egyptian President Hosni Mubarak.

In 1993, Peres appointed Savir director general of the Foreign Ministry. It was in that role that Savir served as Israel’s chief negotiator vis-à-vis the Palestinians during the Oslo process, setting out to achieve a final status peace agreement with the PLO. Savir later served as member of the Israeli delegation in talks with Jordan, which ended successfully in 1994 with a bilateral peace treaty. After that, Savir served as the head of the negotiating team in talks with Syria from 1995 to 1996.

Savir also served as a member of the Knesset between 1999 and 2001, for the short-lived Center Party. Continuing his engagement for peace, in 2011 Savir founded YaLa, a movement that creates dialogue between young leaders from across the Middle East and North Africa, encouraging them to build skills in advocacy and activism.

In his many articles for Al-Monitor, Savir espoused his belief that true peace between Israel and the Palestinians was possible, offering fresh insights on regional and world developments. In parallel, he warned that inaction in the search for peace could bring about a regional religious war. One of the out-of-the-box ideas he discussed in several Al-Monitor pieces was a trilateral confederation between Israel, Jordan and the Palestinians. He also offered creative frameworks for European involvement in Israeli-Palestinian peacemaking. In 2017, he detected a significant shift in Saudi Arabia’s foreign policy and approach vis-à-vis Israel.

Commenting on Savir's passing, Foreign Minister Yair Lapid tweeted May 14, "Today we lost a great diplomat ... A man who devoted his life to Israeli foreign policy and aspired to a different Middle East. He did so with great faith and great talent. His contribution to the State of Israel is enormous and is felt to this day."

Director General of the Foreign Ministry Alon Ushpiz tweeted that Savir "was an exemplary diplomat and one of the most influential people in Israel’s foreign service, for several generations. Savir was a model for proactive diplomacy, one that contributes to shaping the reality and the image of Israel in the community of nations. His far-reaching long vision was accompanied by a keen look at what was nearby. We send our condolences to his wife Aliza Savir, a diplomat in her own right, to his daughter Mia and to all his friends and the people who loved and appreciated him, both in Israel and in the international community."

Former US ambassador to Israel Martin Indyk wrote, "Deeply saddened by the untimely passing of Uri Savir, the smartest, most charming, most dedicated, most creative peacemaker Israel has known. Farewell dear friend."