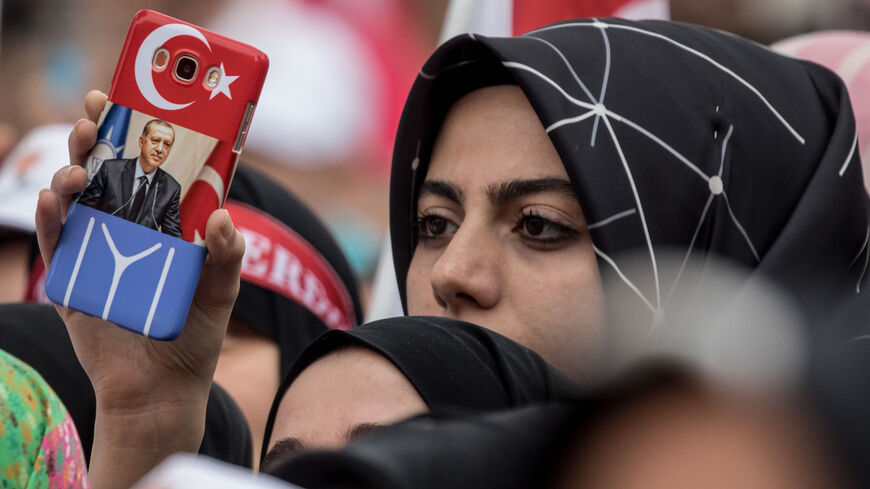 A woman holds up her phone with the image of Turkey's President Recep Tayyip Erdogan ahead of an an election rally in Eyup on June 23, 2018, in Istanbul, Turkey. - Chris McGrath/Getty Images

Turkish President Recep Tayyip Erdogan has viewed social media as a threat for decades. But digital platforms also offer his regime a useful and multifunctional tool for running political campaigns and muddying the waters to distract or direct the public.

Recently, signs have grown that the ruling Justice and Development Party has been successfully employing a technique called “astroturfing” to create the illusion of grassroots support for or against a policy or a person. Two examples have arisen in the last couple of weeks.

First, a young man posted a photo during Ramadan of himself and his friends drinking liquor with a caption that reads, "May the lord accept." The photo, which was shared on his private Instagram account but reached the wider public, drew outrage from Islamists. The employer of the young man, Turkey’s budget carrier Pegasus Airlines, launched an investigation into the matter, forcing the man to take unpaid leave in response to a fierce social media campaign to boycott Pegasus. Prominent columnists close to Erdogan’s party demanded his prosecution. A Turkish prosecutor soon indicted the young man for “inciting hatred and hostility among the public.”

A second incident last week raised further concerns about the Turkish government’s increasing interference in secular life in the name of Islamic citizens. The Mirae KPop concert organized by the Turkish Culture and Tourism Ministry and Korean Cultural Center was called off after some social media users initiated a campaign calling for its cancellation, claiming that the band was promoting homosexuality and thereby offending Islamic traditions. The concert was canceled without any official statement.

In both incidents, social media campaigns appears to force those affected to give in to the pressure. Yet Merve Tahiroglu, Turkey program coordinator at the Project on Middle East Democracy in Washington, DC, points to a more nuanced reality.

“Authoritarian governments do not listen to public opinion. They seek to manipulate and mold it according to their interests. Erdogan never pays attention to public opinion in Turkey unless it directly serves his own political ends,” she told Al-Monitor. “These social media outbursts exist because they are sanctioned and promoted by the government. They reflect only a fraction of Turkish society, which can afford to be so loud only because of the open support and encouragement of the government.”

“These acts give us a false perception that there is a growing fundamentalist movement in Turkey, but it is the opposite,” he told Al-Monitor. “Today in Turkey, all sorts of Islamist movements are weakening amid the deepening economic crisis. We can read this as a sign of drifting into authoritarianism. These campaigns give the conservatives a sense of solidarity. It is an effort to consolidate the conservative base.”

According to Murat Somer, a professor of political science and international relations at Istanbul’s Koc University, social media campaigns are “certainly” not the “real” motive behind the actions of the ruling party officials.

“Certainly, listening to social media is not the real reason here, since the government simply ignores other social media campaigns coming from opposite ideological angles. Astroturfing is certainly also a possibility, since this is a common tactic that authoritarian governments use in the 21st century, “ Somer told Al-Monitor.

Somer pointed out that the incidents mentioned above also indicate the government’s increasing interference in secular life and reflect a “violation of civic rights and freedoms and the secularism principle.”

“What needs to be realized here is that Turkey is still a legally-constitutionally secular country, according to the country’s legitimate laws, and secular freedoms are embraced by major portions, if not the majority of society,” he said.

“But in current Turkey, an elected populist-authoritarian government has long suspended legal-political secularism in the same way that it has suspended democracy through its de facto policies. Such governments actively employ post-truth politics and social media as well as ostensibly private mass media directly or indirectly controlled by themselves to manipulate public opinion and to blur the facts about their illegal or undemocratic actions. Unfortunately, this is a growing trend and pattern of autocratization in the world and we are still in the process of learning how to reverse it.”