Cricket is emerging as a tool for social transformation and improving Syrian refugees’ education. 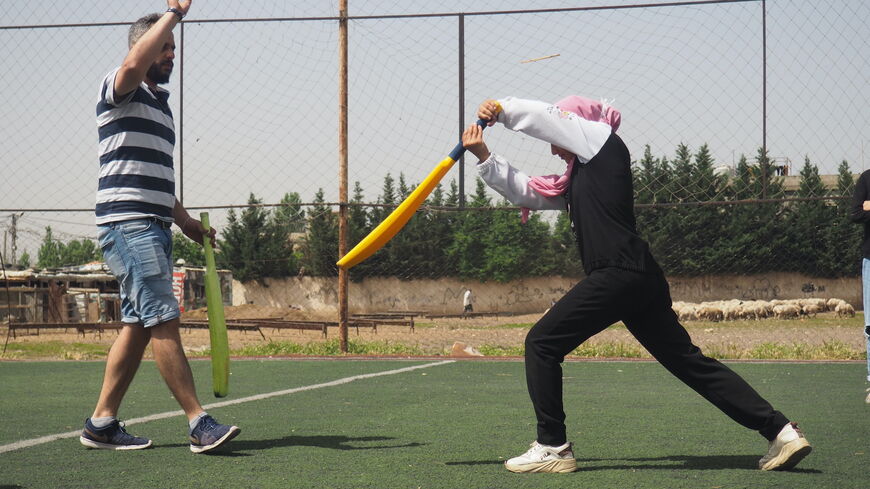 BEIRUT — A group of teenage girls walks around Al Marj refugee camp in the Lebanese Bekaa Valley while everybody looks at them strangely as they continue their way to the field. Aya carries balls while Rahaf is in charge of the bat; Nariman is responsible for the stumps. The residents of the camp, just 9 kilometers (5 miles) from the Syrian border, are not accustomed to seeing these kinds of items. But the players don’t seem to care. They rush because it’s time for their cricket practice.

Rahaf, Nariman and Aya are some of the almost 600 teenagers that participate in the Alsama Cricket Club. This sport, which originated in England, was not very common in Lebanon until two and a half years ago when this NGO started training around 100 Syrian children and teenagers in the Shatila refugee camp in Beirut. Now they have 10 cricket hubs around the country with almost 50 players each.

Elham al-Hassan practices cricket, but the 30-year-old from Homs also trains the teenage girls. “Cricket brought a lot of good things to the camp; now these kids have a goal and something to aim for in the future,” Hassan told Al-Monitor. In Lebanon, there are around 1.5 million Syrian refugees. Most of them live in informal settlements in the Bekaa Valley. Only the Anti-Lebanon Mountains separate them from their native Syria.

The economic crash that has been strangling the Lebanese people for two years now has hit this already-vulnerable community harder. Alongside the critical socioeconomic context, teenagers and especially teenage girls are one of the most forgotten groups in humanitarian aid. “We saw that persevering in getting the girls to keep playing cricket made them more committed to learning and studying,” explained Meike Ziervogel, CEO of the Alsama Project.

Now all of those who play cricket are also receiving an education. But the sport itself is also teaching them values. “Concentration is very important to work as a team, and the idea of commitment is key in our ethical way of playing,” 13-year-old Rahaf Nawaf Al Mohammad told Al-Monitor. “We have also learned the importance of humbleness: When the coach chooses me, I shouldn’t become arrogant,” she said, as her teammates nodded in agreement.

“Despite not being present in the Arab countries, this sport brings an assimilation, a fusion between the people like it happened in India and Pakistan,” said Mohammad Khier, head coach of the Alsama program. “We are trying to do the same thing,” he added. Cricket not only allows boys and girls to play together without upsetting their families. The sport is also being used as a tool for social transformation since it became a unique space for Lebanese and Syrians to meet.

Brummana High School is one of the top schools in Lebanon where members of the establishment send their kids to receive a world-class education. But in this exclusive institution, in the hills above Beirut, there’s a small team of cricket players. In a country where these two groups would hardly meet, the cricket field is now a place where they can get to know each other and break these social barriers.

This May, teams from this high school and the Bekaa, Shatila and Bourj el-Barajneh refugee camps are participating in the Alsama Lebanon cricket championship, the first of its kind in the country. “This is a new thing that was not present in the camp before,” coach Salam Al Rajad told Al-Monitor. Life in these secluded settlements does not offer a lot of activities or work for young Syrians. “You can feel their enthusiasm daily; their training starts at 10, but most of them are already on the field at 9:30,” Rajad said.

“In just months we have seen huge changes in these kids,” said Rajad, a 32-year-old cricket player and mother of four. Their commitment to the sport is accompanied by improvements in education and an increase in their motivation to learn. “Before they started playing, neither boys nor girls knew the value of respect. So we really emphasized the importance of respect among them,” Alsama Project COO Kadria Hussein told Al-Monitor. “Our goal was for them to love the game. It is a really beautiful and peaceful game where there is no friction, and it helps you empty everything inside yourself,” Hussein added.

Besides the insecurity that surrounds teenage girls in the camp, families are now struggling even more to make ends meet. Some parents are increasingly deciding to marry off their teenage daughters in order to reduce the economic burden at home. Alsama’s work through education and sports has helped slow down this growing trend. “I am 30 years old and I used to always ask others what I was supposed to do, but now this is over. Now we have started our lives,” Hassan said.

“We are going to build cricket centers all around Syria,” said young cricket player Nariman Khaled Al Rajab. Some of these girls have barely any memory of their native home. As the Syrian war enters its 11th year, these young refugees still dream of their homeland and imagine a future for it. “We all think about the future because we are capable of beautiful things; we see a future for when we go back to Syria in which we can all play cricket,” Hassan said.