Why women in this Lebanese refugee camp opt for trade, not aid

A group of Syrian and Palestinian women from a refugee camp in Lebanon transitioned a struggling project into an enterprise that aims to export around the world. 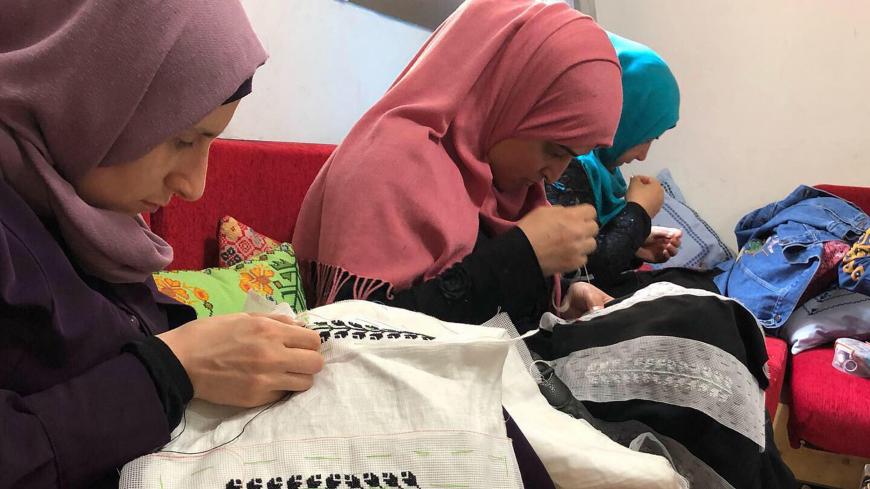 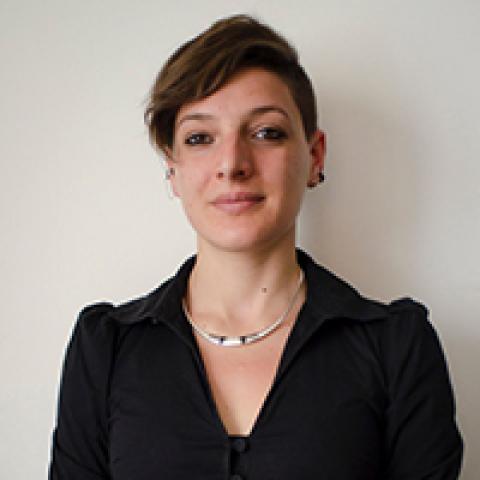 As she carefully picks up the colors she wants to use, Amna, 61, says that she never thought she would get into embroidery.

Back in Syria, she ran a beauty salon that she had to close when the civil war started. When she was eventually relocated to the Shatila refugee camp in southern Beirut in 2013, she decided to enroll in an embroidery training.

Five years on, she is still embroidering. Today, her job is embroidering a young girl, with a flowing mane of hair, on the back of a jean jacket. The girl will appear in front of a view of Shatila camp. The jacket is likely to be sold overseas, which would have been unthinkable only a year ago.

“We are like a family here,” Amna told Al-Monitor, as she introduced a small group of her colleagues at the Shatila Studio workshop.

The studio was established with funding by Basmeh & Zeitooneh, which has trained over a thousand women between 2013 and 2018. The scarves, bags and cushion covers the women made were sold and the trainees received a small sum per piece sold. At the end of 2018, however, the project ran out of funding and the studio was about to close.

Then four former trainees decided to take over the studio. Niveen, Boushra, Fatimah and Samar, who were already working as artisans and supervisors at the studio, decided to turn it into a business.

“It was a huge step,” Niveen Sokari, co-director and the chief financial officer of the studio, told Al-Monitor. “Everything changed. We had to be more organized and always keep an eye on the figures.”

Sokari, a Palestinian born in Yarmouk refugee camp in Syria, spoke to Al-Monitor in her small office, whose walls are covered by hand-written spreadsheets illustrating the revenues, monthly profits and accumulated earnings. She told Al-Monitor that the studio faces many ups and downs, which should not come as a surprise for a startup, but the accumulated earnings are slowly increasing.

“Since we turned into a business, one of the things I am most proud of is how the quality of our products improved,” she said, explaining that they are able to “offer something unique” to the international markets.

The team just finished working on an order of 600 bags for a US company. They are currently experimenting to see how their embroideries look on different pieces of clothes for a European stylist.

Most of the products from the collection of Shatila Studio are sold online, but they are planning to open a small showroom at the studio, which is located in the camp.

The studio offers a stable income to 74 women, but more women — up to a hundred — get involved when there is a lot of work. The artisans are paid by the piece, regardless if it is sold or not. The cost of the final product is calculated by adding up material and labor costs. Then they double that figure to cover running costs and add a 10% profit margin.

Every other day, the team members gather in groups of 10 to check the quality of what they have produced and plan their work for the next few days.

“Stepping up the organization was critical,” Meike Ziervogel, a German-British entrepreneur and co-director of the studio, told Al-Monitor.

She believes that a good nongovernmental project would be able to survive on its own after funding stops. “Stop the funding. It is as simple as that. I think projects [like Shatila Studio] should not be run as NGO-funded projects, they have to be run as a business. If you pay people for who they are, rather than what they do, there is a problem,” she said.

According to Ziervogel, especially now, eight years into the Syrian crisis, what is needed are startup investments, rather than funding for NGO projects.

But there is no doubt that Shatila Studio’s identity is deeply connected with war, forced migration and refugee camps. Sokari grew up in Yarmouk, in Syria. But when she arrived in Shatila she was just shocked. “I had no idea a refugee camp could look this bad,” she said. “Before coming to Lebanon — even though I am a Syrian Palestinian — I did not consider myself a refugee. Here I was forced to fit into this identity.”

“It is war that brought us together,” the Shatila Studio website states. Its logo features birds resting on power lines, one of the most common sights in the camp.

“Our embroideries tell our own stories,” Sokari added. “Shatila is our identity, it is where we are from. But with our skills, we can get our voice out into the world.”