The death of revered Iraqi poet Muzaffar al-Nawab, has stirred controversy in the Iraqi street between the admirers of his poetry and the critics of his alleged 'immoral' stances. 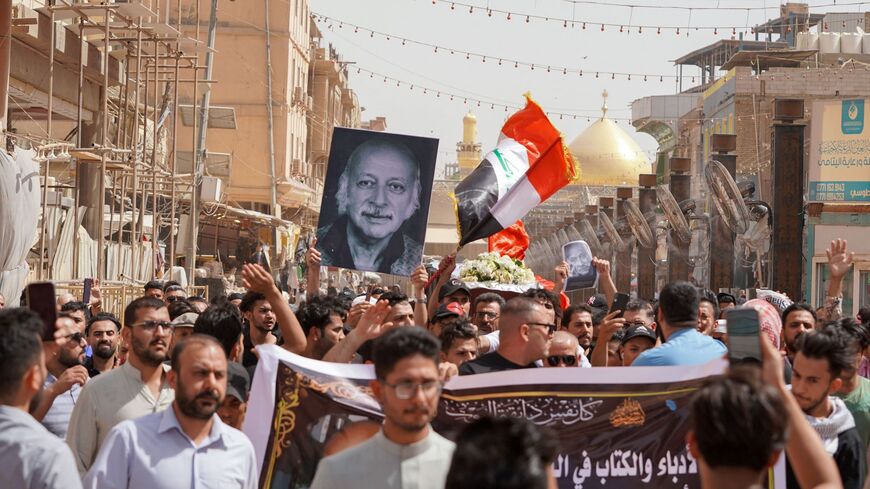 Mourners carry the coffin of renowned Iraqi poet Muzaffar al-Nawab during his funeral procession in al-Tousi street near the Imam Ali shrine, in Iraq's central holy city of Najaf, on May 21, 2022. - QASSEM AL-KAABI/AFP via Getty Images

BAGHDAD — Iraq bid farewell on May 20 to Muzaffar Abdul Majeed Al-Nawab, nicknamed the “revolutionary poet” for decrying some corrupt regimes across the Arab world.

Nawab passed away at University Hospital Sharjah in the UAE after a long illness at the age of 88 years. His body was brought back to Iraq by and met by the prime minister and other prominent officials.

Nawab’s popular and eloquent poetry earned him a prominent position at the forefront of modern Arabic literature. His poems were filled with revolutionary fervor, social anger, satire, and rebellion against injustice and corruption by Arab dictators. Some of his poetry composed in the spoken dialect were sung by some of the most renowned Iraqi singers, such as Yas Khoder. These include the poems called “Oh, Basil” [Ya Rihan], “Al-Rayl and Hamad,” and “The Night of Violet.”

Syrian writer Aws Daoud Yaqoub described Nawab in a book dedicated to his poetry as the poet of “revolutions and sorrow.”

Nawab spent years of his youth in Iraqi prisons in the 1960s because of his communist stances. He was sentenced to death, but he succeeded in fleeing Iraq, where he faced failed assassination attempts. Only after 2003 did he return to Iraq, where he only stayed for a short period.

Nawab may also be labeled as a poet of pop culture, since his poems speak to the Iraqi majority of all age groups, and his poetic production uses simplified folk language in a frank and sharp way. He sometimes resorted to attacks and obscene words to deliver a specific message.

In 2018, he was nominated by the Iraqi Writers Union for the Nobel Prize for Literature.

Some Arab intellectuals considered him a great poet with sincere revolutionary principles against fascist regimes, injustice and corruption, while others criticized him for his fragmented attitudes towards the tyrannical regimes in the region, and behavior contradictory to his declared principles.

He took extreme hostile positions against the West, Israel and the allies of the United States, such as the Gulf states. In one of his most renowned poems, he described the commanders of these countries as “the pigs of this Gulf” in a poem bearing this same title. He described Arab meetings to solve the Arab issues, especially Palestine, as “lesbian meetings” in the sense that they produce nothing, mocking the Arab rulers by saying “a pig’s coop is purer than the purest of you.”

Nawab’s position generated harsh criticism from some on social media, who lamented his special treatment before his death in a Gulf country. Ironically, the UAE has normalized ties with Israel, which contradicts Nawab’s revolutionary principles opposed to both the rulers of the Gulf and to Israel.

Dhafer Al-Ajmi, Executive Director of the Gulf Monitoring Group, said in a tweet that Nawab was mostly known for decrying Gulf leaders and using vulgar language to describe them. “Despite that, he died in a Gulf hospital, where he received treatment at the order of a Gulf Sheikh.”

Some described him as sectarian and biased, since he often attacked Arab rulers, the West and Israel, but he praised Khomeini and Bashar al-Assad, and failed to take any position on the occupation of Iraq, which brought the Shiites to power.

His poetry also included strong expressions against sacred Sunni figures such as Abu Sufyan and Amro bin Al-Aas, who are among the companions of the Prophet. These figures are frowned upon by the Shiites because of their attitudes towards Imam Ali.

Saudi journalist Ali Al-Quhais noted that Nawab died in the Gulf states after he offended them and their rules, and even insulted Mecca. “The Gulf countries held poetry evenings for him and opened their hospitals to him,” Quhais said, criticizing Nawab for keeping mute when his own country [Iraq] was occupied.

Others believe Nawab’s positions were not sectarian, but rather express his revolutionary leftist vision against reactionary principles, colonialism and injustice. Nawab referred to himself in his poetry as an Qarmatian, in reference to a social movement which led a revolution against the Abbasid Caliphate between the years 899-1077, and which included non-Arab nationalities, including black-skinned people.

By describing himself as a Qarmatian, Nawab sought to allude to his Indian origins. His aristocratic family migrated to Iraq during 19th century.

This explains the diverse cultural aspect of his poems, and why he tackled the issues of the oppressed Iraqi cultural minorities under the domination of the Arab majority in the country.

This also explains the anger of Nawab and those like him, who are decrying a long history of persecution witnessed by cultural minorities in Iraq.

Iraq was once distinguished by its ethnic, religious and cultural diversity, as it was home to large communities of diverse origins. Today, these communities are on the brink of disappearance, as they were forced to flee the political, security and societal pressures in the absence of the authority of law and the state.