The Egyptian government is said to be seeking to halt huge construction works across the nation, citing the economic crisis and the repercussions of the Russian-Ukrainian war. 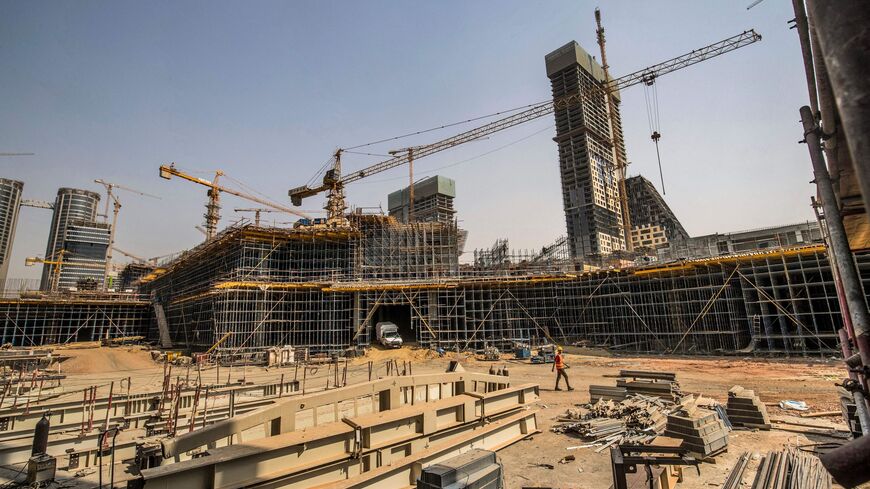 This picture taken on Aug. 3, 2021 shows a view of construction work at the business and finance district of Egypt's "New Administrative Capital" megaproject, some 45 kilometres east of Cairo. - KHALED DESOUKI/AFP via Getty Images

CAIRO — On May 9, the Egyptian parliament held a plenary session in a bid to suspend national megaprojects due to the economic crisis plaguing the country.

During the session, MP Mustafa Bakri, who is seen as pro-regime, said, “People should be the priority, especially amid the social tension and the suffering of citizens.”

He added that Egyptian President Abdel Fattah al-Sisi has decided to implement “projects [to secure] a decent life [for the people], which is significant. Other projects, however, must be temporarily halted despite their importance because of the repercussions of the Russian-Ukrainian war and other global crises.”

On May 11, Maha Abdel Nasser, an MP for the pro-regime Egyptian Social Democratic Party — which is allied with the Nation’s Future Party that holds the parliamentary majority — said during a TV interview with journalist Ibrahim Issa, who is also close to the regime, that the government needs to start development projects that “would generate income for the country.”

Several questions arose as to the reasons behind the pro-regime MPs' attack on the government, amid speculation that the government might be using its political and media arms to halt the national projects launched by Sisi years ago.

On May 12, a source from the Nation’s Future Party said in an interview with al-Araby al-Jadeed that the party members and pro-Sisi MPs do not discuss “thorny” issues such as the new administrative capital without obtaining prior permission. Party members take instructions from the National Security Agency and "do not talk about any topic under the dome of parliament or in the media without the agency’s prior permission,” the source said.

On May 9, Hassan al-Sadi, a professor of finance at Cairo University, said in an interview with al-Hurra website that the calls for halting national projects are no longer merely demands within parliament, but they have been directed at the state to reschedule projects denominated in US dollars.

In March, the Central Bank devalued the Egyptian national currency by 19% against the dollar in order to provide dollar resources for basic commodities, and to pay interest and installments of overdue loans.

According to a government report issued last July, the national projects’ cost since Sisi took power in 2014 amounted to 6 trillion Egyptian pounds (around $328 billion).

In the first official response from the government, Minister of Transport Maj. Gen. Kamel al-Wazir said during a May 10 interview with pro-regime journalist Ahmad Moussa on his talk show that these projects are essential "not only because they support foreign investments and strengthen Egypt’s infrastructure, but also because they contribute significantly to reducing unemployment, by hiring nearly 6 million Egyptians.”

“Without these projects, people will not be able to eat,” he said. But he added that dollar-denominated projects "can be suspended for a period of time, without being cancelled, until the global situation is cleared up.”

During a May 15 press conference, Egyptian Prime Minister Mostafa Madbouly said, “Some projects have stopped or slowed down, which was out of our control, because we import some raw materials and supplies that were disrupted on [global] supply markets.”

However, MP Diaa al-Din Dawoud told Al-Monitor, “These national megaprojects did not eliminate the unemployment problem and did not even contribute to reducing it, since workers have been hired only temporarily.”

He added that “the launch of so many national megaprojects at the same time made the Egyptian economy vulnerable to any setbacks," such as  the coronavirus crisis, the US Federal Reserve raising interest rates, and the Russian invasion of Ukraine.

Russia's attack on Ukraine caused a severe global economic crisis that was felt in Egypt due to the suspension of wheat imports from those countries, as well the decline in tourism. Russians and Ukrainians constituted 30% to 40% of the total incoming tourists to Egypt.

Dawoud said that he did not object to megaprojects such as the administrative capital or the city of New Alamein, but rather to the implementation period and the list of priorities.

“These projects should not come at the expense of other productive plans that provide real and permanent job opportunities,” he said, calling for “suspending them and rescheduling other projects.”

According to Reuters, after an Emirati company withdrew from the administrative capital project in 2015, the Egyptian army and the government have been struggling to provide $25 billion for the cost of the first phase so far.

“The government cannot come out and officially announce the cancellation or suspension of these national projects, for several reasons," Hoda al-Mallah, an economic expert and director of the International Center for Economic Consulting and Feasibility Studies, told Al-Monitor. "Such announcement would cause disruption in foreign investments in Egypt, which could be very risky to the Egyptian economy.”

She added that the Egyptian government obtained some loans specifically for development projects, and therefore suspending implementation may lead to legal accountability from the lending countries.

While Mallah stressed that these projects create a climate for investments in Egypt and motivate businessmen to set up projects, she expected the government to put off some of them, especially those denominated in US dollars, in light of the budget deficit and the low cash reserves.