The Ghriba pilgrimage is a testament to the resilience of Tunisia’s minority Jewish community, which dates back more than 2,000 years. 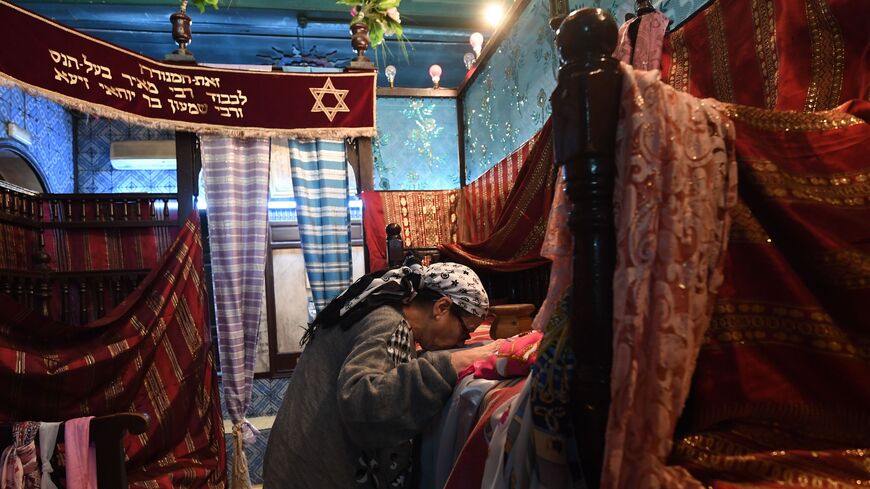 A Tunisian Jewish woman is seen in the Ghriba synagogue in the Tunisian resort island of Djerba on May 1, 2018, on the eve of the annual Jewish pilgrimage to the synagogue. - FETHI BELAID/AFP via Getty Images

DJERBA, Tunisia — Jewish pilgrims from around the world flocked to the Tunisian island of Djerba in mid-May to visit El Ghriba, the oldest synagogue in Africa, sharing festivities with an ancient Jewish community there that has stood the test of time.

Thousands of Jewish worshippers, many from France, Israel and the United States, made their way to the holy site May 19-20 for the annual pilgrimage, part of the Lag B’Omer Festival that marks 33 days after the start of the Jewish Passover. Outside of Israel, El Ghriba is one of the most sacred Lag B’Omer destinations, said to have been built more than 2 millennia ago when the first Jews arrived to Djerba with a stone from the Temple of Jerusalem.

Tunisian security forces were on high alert to ensure the pilgrims’ safe passage, manning busy intersections and vetting visitors at checkpoints in front of the synagogue.

The scene was festive around the Ghriba complex, with groups singing songs in Arabic, Hebrew and French, enjoying fresh-grilled kosher meat and sipping on Boukha, a Tunisian-Jewish fig liquor that is a staple of the island.

Inside the ornamented temple, visitors lit candles, prayed and wrote wishes on eggs to lay at the temple’s floor, continuing a local custom to bring good luck.

“It connects you spiritually” to experience the mix of cultures and traditions, Goldie Hoffman, an American Jew visiting El Ghriba for the first time with her husband, told Al-Monitor.

“It’s nice, even if it’s a bit crazy for me,” Johanan, an Orthodox Jew from Switzerland, told Al-Monitor. “The customs are different from what I’m used to, but this pilgrimage is 100% important” in keeping Jewish history and tradition alive here, he said.

High-ranking government officials also took part in the festival in a show of solidarity with the minority community. "The Jewish pilgrimage …  demonstrates that Tunisia remains a land of peace, tolerance, openness and coexistence,” said Prime Minister Najla Bouden at the start of the ceremony.

For Tunisian-born Jews now living abroad, the festival was a special occasion to reconnect with their homeland and its people.

“I was born 1 kilometer from here,” Victor, a 62-year-old Tunisian-born Jew who left Djerba for France with his family as a child, told Al-Monitor. “El Ghriba is special for me and important for Tunisia.”

Chemi Bittan, a 47-year-old Tunisian-born Jew who also left Djerba as a child, spoke to Al-Monitor about his ties to the island over a cold bottle of Celtia, Tunisia’s best-selling beer. “Even if we leave Djerba, Djerba doesn’t leave us,” he said with a smile.

While the pilgrimage was a welcome occasion for Tunisian Jews to congregate, it was also a solemn reminder of just how many have left. Since 1948, Tunisia’s Jewish population has dropped from 100,000 to just 1,000, owing to geopolitical tensions and, more recently, economic hardship.

Since independence, Tunisia’s government has taken steps to protect its Jewish citizens, but that has not always stopped antisemitic attacks. In the aftermath of the Six-Day War in 1967, rioters targeted Jews and torched synagogues in Tunis, driving many out of the capital. In 1985, a Tunisian police officer shot three Jews at a synagogue in Djerba in apparent revenge for an Israeli air raid on the PLO’s headquarters outside Tunis the week before that killed at least 60 Palestinians and Tunisians. In April 2002, an extremist set off a suicide bomb at the Ghriba synagogue, killing 21 people and crippling the city’s tourism industry.

“People can turn against us when there are geopolitical problems,” one Tunisian Jew who declined to be named told Al-Monitor. “However, things are more peaceful now.”

Tunisian Jews who seek to move abroad now do so less for fear of their safety than a lack of opportunity. Unemployment is high in Tunisia, especially for youth, and it can be difficult to find a spouse of the same faith or build a family in the dwindling Jewish community.

"There are not many jobs,” said Ariel Houri, a Djerbian Jew who works in Djerba’s central market. “Many Tunisians want to leave, both Muslim and Jewish. It's not a question of religion, it's about economics."

Today, the most vibrant Jewish community is in the Hara Kbira, a small quarter near Djerba’s central town and marketplace, Homt Souk. The well-guarded neighborhood is unlike anywhere else in Tunisia, which is 99% Sunni Muslim. In the Hara, Jewish children in kippahs run through the streets, residents speak Hebrew alongside Tunisian Arabic, and synagogues, kosher restaurants and yeshiva schools are on every other corner.

Ariel Cohen, a 21-year-old American Jew who visited Djerba in February with his father, said he was amazed at the community’s rich, authentic culture and commitment to Jewish heritage.

"The Hara is one of the best living representations of a traditional Sephardic community I’ve seen," Cohen told Al-Monitor. "I'm amazed at their depth of religious knowledge and level of classical Hebrew. They welcomed us like we are a part of the family. It was such a joy to experience their way of life."

Residents of the Hara say they generally live in harmony with their Muslim neighbors and are proud of this coexistence.

“We have no problems. We live together, study together and work together,” said Youssef Wazan, an elder representative of the Hara Kbira’s Jewish community.

“In France, you could have problems wearing a kippah. But not here in Djerba,” he said, adding that Tunisia’s government and security forces had done a good job protecting the minority group in recent years.

However, some concede that there are underlying hostilities from a small segment of the population that occasionally bubble up, especially due to conflict in Israel and Palestine.

“The majority of Tunisians are open and tolerant, but a minority can have problems,” said Houri.

“Whatever happens in Jerusalem, we feel it in the Hara,” he added.

Despite the challenges, many of Tunisia’s Jews are determined to stay in their homeland — and cherish their Tunisian identity just as their Jewish heritage.

“We are all Tunisians,” Hai, a Jewish businessman from Tunis, told Al-Monitor. “We were born here and we will always have our roots here. If you enter my home, you will see a huge Tunisian flag.”

With this outlook, it is perhaps fitting that Djerba is linked to Lag B’Omer, a holiday that has come to symbolize the “resilience of the Jewish spirit.”

“The Jewish community is strong here in Djerba,” said Wazan. “We live together and we help each other — including the poor and the unemployed. That’s the role of the community.”

by Ismail BELLAOUALI with Philippe AGRET in Rabat and Marie GIFFARD in Madrid | AFP | Jun 24, 2022
END_OF_DOCUMENT_TOKEN_TO_BE_REPLACED