The annual Jewish pilgrimage to El-Ghriba synagogue in Tunisia has rekindled the popular and political debate over the issuance of a law criminalizing normalization with Israel. 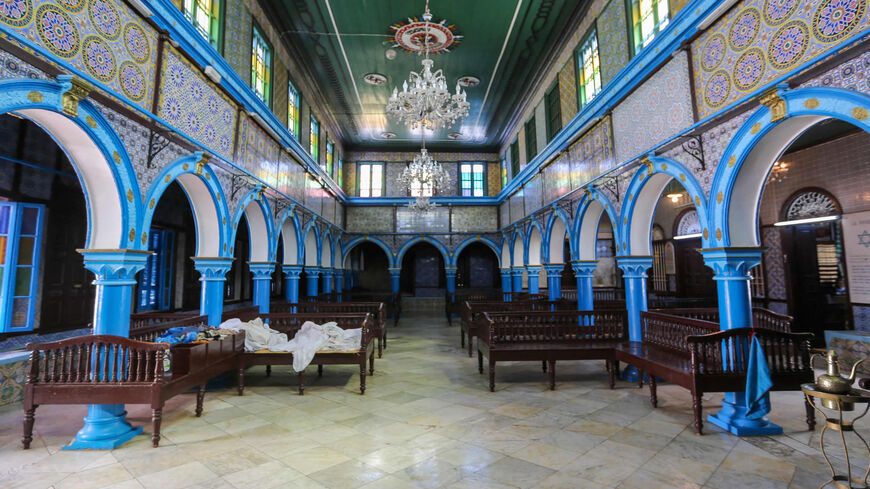 This photo shows the interior of El-Ghriba synagogue, the oldest Jewish monument built in Africa, on the first day of the annual pilgrimage, Djerba island, Tunisia, April 26, 2021. - Fathi Nasri/AFP via Getty Images

TUNIS, Tunisia — The annual Jewish pilgrimage to El-Ghriba synagogue on the Tunisian island of Djerba has rekindled the popular and political debate over the issuance in Tunisia of a law criminalizing normalization with Israel.

The Palestinian cause is an issue that the majority of Tunisians support, even if this backing is often superficial.

In a May 26 statement, the moderate Islamist Ennahda movement denounced what they claimed was the exploitation of the pilgrimage to El-Ghriba synagogue to officialize forms of normalization with Israel. “Most Tunisians have expressed their rejection of normalization, as the minimum support they can offer the Palestinian people,” the statement said.

Yet Ennahda said that it values ​​coexistence between religions and respect for religious rituals.

On May 22, the Tunisian leftist Workers Party also issued a denouncing statement. It decried hosting those it described as “symbols of normalization with the Zionist entity” in Tunisia under the pretext of performance of religious rites, noting that a large part of the Jewish pilgrims came via direct flights from Tel Aviv.

In the same statement, the party lashed out at Tunisian Prime Minister Najla Bouden for posing for photos with Jewish pilgrims in Djerba, a move it described as a blatant disregard of the feelings of the Tunisian people and the brotherly Palestinian people.

Mohsen Arfaoui, member of the Echaab (People's) movement, which is close to President Kais Saied, and member of the now-suspended parliament, called on the Ministry of Foreign Affairs and the Interior Ministry to clarify the entry of Israelis into Tunisia.

Speaking to Al-Monitor, Arfaoui blamed Saied for showing leniency in terms of normalization with Israel, especially since the president had equated normalization to “high treason” in his election campaign.

In a May 19 statement, the Tunisian Popular Current (Tayyar Chaabi) said the pilgrimage to El-Ghriba turned into an annual occasion to further consecrate normalization with “the enemy entity and an opportunity for its most dangerous terrorist members to enter Tunisia.” The movement reiterated its insistence on the need to issue a law criminalizing normalization with Israel.

Meanwhile, Bouden was widely criticized for taking a picture standing next to French-Tunisian Imam Hassan Chalghoumi, known in Tunisia as the pro-normalization sheikh. She later deleted the photo from the official page of the government’s office.

Ghazi Chaouachi, secretary-general of the Democratic Current (Attayar), told Al-Monitor that the Tunisian state should respect the positions of the Tunisian people in support of the Palestinian cause, urging the president to issue a decree criminalizing normalization at all levels.

He recalled that Saied’s anti-normalization slogan during his electoral campaign gained him significant popularity.

Thousands of Jews from around the world flocked to Tunisia May 18-19 to perform the annual pilgrimage to El-Ghriba synagogue.

Preparations for the success of this important tourism event started weeks before, with arrangements to ensure security throughout the pilgrimage season. Tunisian security forces were heavily deployed in the entry ports on the island and in Riyadh where the synagogue is located to ensure the safety of the pilgrims.

The pilgrimage season was inaugurated May 18 in the presence of Bouden and a number of ministers, most notably Tourism Minister Mohamed Moez Belhassan, Minister of Religious Affairs Mohamed Ibrahim al-Shaibi and several government officials, as well as many foreign political and religious figures, including Chalghoumi, who heads the France-based Forum of Imams.

In a speech at the inauguration, Bouden said the annual pilgrimage to El-Ghriba bears witness to the fact that Djerba is an island of coexistence as it houses synagogues, churches and mosques built side by side.

On May 18, Belhassan said in a press statement that the pilgrimage to El-Ghriba synagogue heralds the start of the summer tourism season and sends messages to the world of coexistence, peace and tolerance in Tunisia, pointing to the presence of 50 journalists and many distinguished personalities from 14 countries who attended the inauguration of the pilgrimage season.

Perez Trabelsi, head of the Jewish community in Tunisia, which organizes these annual celebrations, told Al-Monitor that this year's pilgrimage season registered an exceptionally high turnout of between 3,000 and 6,000 visitors from several countries, including prominent local and international figures. Trabelsi said that the pilgrimage to El-Ghriba has kicked off strongly after a two-year hiatus due to the coronavirus pandemic.

Abdul Sattar Amamou, professor of history and intangible heritage at the University of Tunis, told Al-Monitor that about 1,850 Jews live in Tunisia, 1,000 of whom live on the island of Djerba, while a small number of Jews are distributed in the rest of Tunisia, such as the province of el-Kef, in the northwest.

He explained that El-Ghriba is one of the oldest synagogues in Africa and an ancient Jewish pilgrimage site dating back 2,500 years. “Locals believe that it contains the oldest copy of the Torah in the world. It is believed that this synagogue was built with stones brought by displaced Jews from the altar of the destroyed Temple of Solomon [in Jerusalem] in 586 B.C.,” he said.

Amamou pointed out that the origin of the name of Ghriba (Arabic for female stranger) refers to a Jewish woman who came to the island after miraculously surviving a fire. The residents later started to visit her to get her blessing and seek healing from infertility. “This temple was founded by a Jewish woman, a stranger to the area, hence the name,” he said.

He explained that the pilgrimage is a very important religious ritual for the Jewish community in Tunisia and around the world. “The Tunisian people respect this religious sanctuary for the Jews who are a minority in Tunisia,” he said.

But despite the great support for the pilgrimage, many Tunisians see it as a form of normalization with Israel.

Several social media campaigns criticized the entry of Israelis to Tunisia, reminding Saied of his statements during his election campaign in which he labeled normalization with Israel as "high treason."

In October 2019, before his election, Saied had asserted that he would not allow anyone with an Israeli passport to enter Tunisia, not even to visit El-Ghriba synagogue in protest of some Arab countries normalizing ties with Israel.