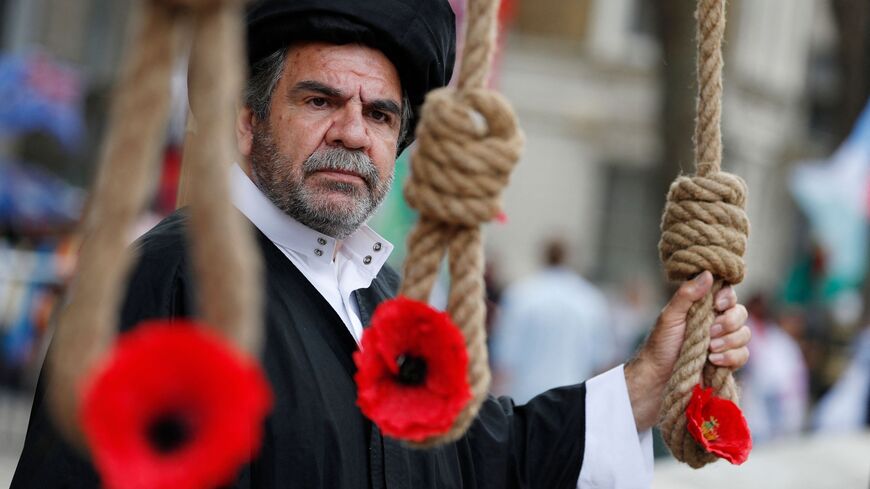 A protester holds a noose during a demonstration organized by supporters of the National Council of Resistance of Iran to protest the inauguration of Iran's President Ebrahim Raisi outside Downing Street in central London Aug. 5, 2021. - ADRIAN DENNIS/AFP via Getty Images

Iran’s judiciary said that it will move forward with the execution of Iranian-Swedish citizen Ahmad Reza Jalali.

Judiciary spokesperson Zabiollah Khodaian said that Jalali was arrested and charged with spying for the Israeli Mossad and sharing intelligence about Iran’s nuclear scientists in 2016. He also faces national security charges. Khodaian said that Sweden gave Jalali citizenship after his arrest, but he is still Iranian and will be treated as an Iranian by the court.

Khodaian said that Jalali has been sentenced to death and it will be carried out. Many have speculated that Iran announced Jalali’s execution, which is planned for May 21, as a bargaining chip in the trial of former Iranian official Hamid Nouri in Sweden.

Nouri was arrested in Sweden in 2019 in connection with Iran’s 1988 massacre in which approximately 4,000 political prisoners were executed, many of them belonging to the Mujahedin-e Khalq group. Nouri worked as a guard at the prison at the time of the executions.

Khodaian denied that the announcement of Jalali’s execution has anything to do with Nouri’s trial in Sweden. He said that Jalali was arrested two years before Nouri and that his sentenced had already been issued.

Jalali is one of a dozen such dual citizens of Western countries being held in Iran on various national security related charges. Whenever their cases are raised by foreign governments, Iran typically raises its own grievances, typically about money owed to Tehran. The most recent release of a dual national has been Nazanin Zaghari-Ratcliffe, who was freed after six years along with another British-Iranian citizen, Anoosheh Ashoori. Upon their release, the UK was supposed to unblock funds it owed Iran but was withholding in compliance with US sanctions. Though Iranian officials claim that there has been no issues with the use of the money for humanitarian purchases, according to some Western reports, there has been confusion about how much Iran has received.

One of the many points of confusion over the deal between Iran and the UK was that it was reported to have included the release of Morad Tahbaz from prison, though not from Iran. However, shortly after the exchange, Tahbaz was placed back in prison.

Another high-profile case is that of US citizens Baquer and Siamak Namazi. Siamak was arrested in 2015, his father traveled to Iran to help him and was arrested himself. He is now under house arrest and cannot leave Iran despite reportedly suffering from health conditions. Iranian-American citizen Emad Sharghi, who was arrested in 2018, also remains in Iranian custody.