Will Erdogan sustain balance between West, Russia as Ukraine war drags on?

If the West and NATO remain united during the long war in Ukraine, Turkey’s policy of straddling between Kyiv and Moscow would be unsustainable. 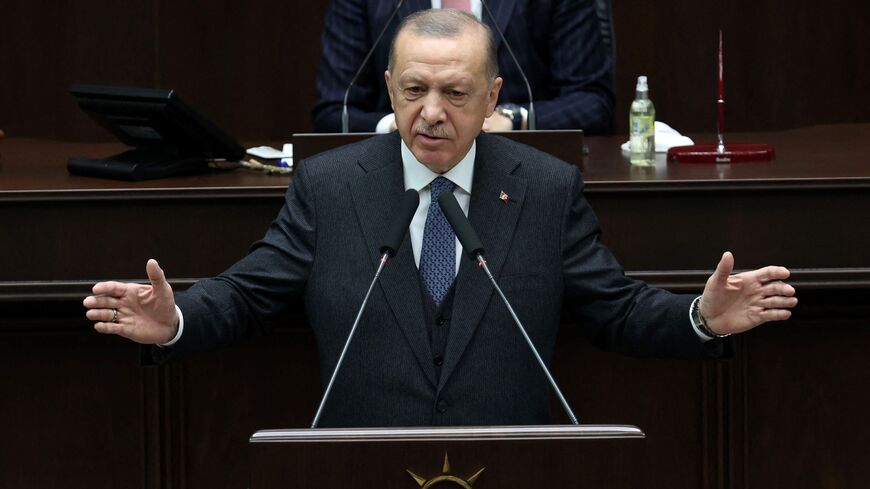 Turkish President Recep Tayyip Erdogan gives a speech during a party parliamentary group meeting at the Grand National Assembly of Turkey in Ankara on April 20, 2022. - ADEM ALTAN/AFP via Getty Images

"It is the only game in town," a Turkish ambassador said in a self-aggrandizing fashion at an international conference recently.

Russian President Vladimir Putin seemingly has no interest in ending the war at this stage. So failure in achieving a ceasefire through negotiations has nothing to do with Turkey.

But the prospect of a very long war brings up the question of how long Turkey can sustain its balancing act between Russia and Ukraine — and how long can Turkey get away without implementing sanctions against Russia?

Turkey's ongoing balancing act is the consequence of both necessity and choice. Since the 2014 annexation of Crimea and the Russian military intervention in Ukraine, Ankara has adopted a principled, pro-Kyiv position. Turkey has not recognized the Crimea's annexation or the violation of Ukraine's territorial integrity.

Russia is constructing Turkey’s first nuclear power plant at a cost of $20 billion. Turkey meets some 45% of its natural gas and 17% of its oil demand from Russia. Ankara reiterated several times that it wasn’t planning to comply with the sanctions imposed against Russia.

Turkey’s position is the inevitable outcome of Erdogan’s adopted policy of strategic autonomy — a fancy explanation for its Eurasianist foreign policy, which gained momentum after 2016 and can be defined as a gradual drift away from the West.

Turkey remained neutral during World War II under President Ismet Inonu, who masterfully balanced between the Allies and the Axis. This historical background and Kemal Ataturk’s dictum “Peace at Home, Peace in the World,” serves well for Erdogan as it mutes the opposition at home.

Nonetheless, it is far from certain that Erdogan’s position could be sustainable in a prolonged war. There will be no room for neutrality if a country like Turkey belongs to the Western security alliance at a time when even the perennial neutral countries like Sweden and Finland consider joining NATO.

US Treasury Secretary Janet Yellen’s warning about the consequences of undermining the sanctions on Russia was addressed mainly to China but it also concerns Turkey. Yellen made those remarks at the Atlantic Council meeting a week before the annual meeting of the International Monetary Fund and the World Bank.

Thus, Turkey will eventually have to choose between Russia and the West. Given the strong Eurasianist element within the Turkish power structure and the prevailing pro-Russian mood in the pro-government circles, it is far from certain that Turkey would end up on the side of its formal Western allies.

During the initial stage of the war, Turkey hosted a spate of foreign dignitaries, from the secretary-general of NATO to the new German Chancellor Olaf Scholz. Ankara was commended for implementing the provisions of the Montreux Convention and denying the passage of warships from the Turkish Straits into the Black Sea.

The sinking of the flagship missile cruiser Moskva has attested to the importance of the Turkish Montreux decision. There are three similar vessels in the Russian arsenal, but Moscow cannot bring them to the Black Sea. The war inadvertenatly enhanced Turkey’s critical geopolitics.

On March 26, issue, the British periodical The Spectator had a cartoon of Erdogan as a sultan on its cover, with the headline: “Turkey’s dilemma.” In the cover story, Owen Matthews wrote, “Erdogan is in a great hurry to patch up the conflict between two of its most important trading partners — perhaps too much in a hurry for Washington’s taste. … Erdogan will be backing a solution that faces Putin’s face. That will put him on a collision course with his NATO allies”

If the West and NATO remain united, Turkey’s non-compliance with the Western sanctions regime against aggressive Russia will be unsustainable. But if cracks appear within the Western alliance, Erdogan can keep up with his Eurasianist deviation presented as strategic autonomy.