A storyteller is roaming the displaced camps in north Syria to help children forget about the daily bombardments and suffering. 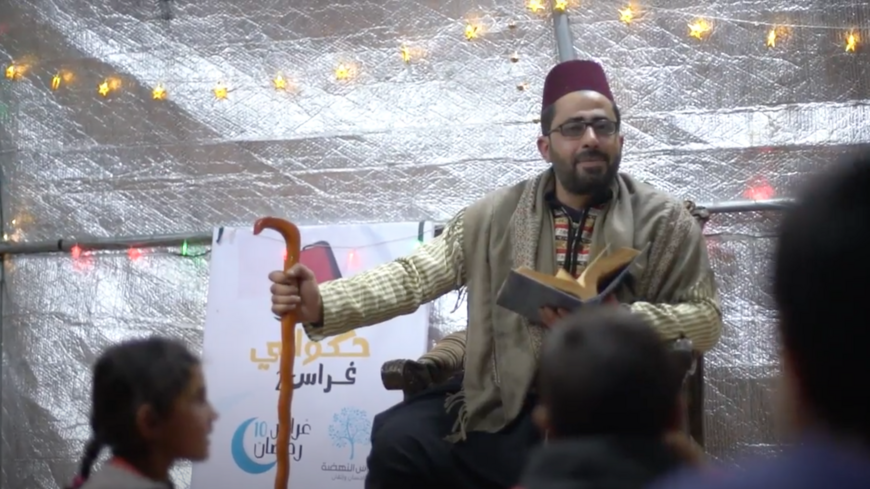 In his traditional embroidered clothes and his red fez, a storyteller sits in his decorated tent as he leans on his stick to enchant children around him.

The words “once upon a time” transport them to a happier world far away from the war, the staccato of bullets and the scenes of killing and destruction in Syria.

During the Muslim holy month of Ramadan, Hussein Bertawi tours the camps for the displaced across Idlib in northwest Syria to meet the children and tell entertaining and eye-opening stories with the aim of spreading joy, offering wisdom and instilling values, as part of an initiative launched by the Ghiras Alnahda organization in the displaced camps.

Bertawi told Al-Monitor that the topic of a story is one of the key elements behind a child’s amazement, as it has to be attractive. A storyteller, he added, should also perform well and show excitement, be it through sounds, movements, smiles or expressions.

Also, he said, a story should cover purposeful educational topics that motivate children to participate and express their opinion.

When narrating stories, he opts for simple words to touch the hearts and minds of children, while focusing on the lessons learned and on the need for children to apply what they have learned in their daily lives. A storyteller, he continued, must be able to grab the attention of listeners and should offer diversified topics, characters and events to enhance children’s love of literary arts.

“Most of the children were born inside the camps and knew nothing about storytellers. We tried to introduce the character [of the storyteller], which is a character from the Levantine heritage, as most people came to storytellers to enjoy their stories and learn lessons from them,” Bertawi said.

The children’s interaction, Bertawi said, “is wonderful. We try to reach out to them and draw smiles on their faces with nice stories, and this year we targeted them with a somewhat educational aspect.”

“A storyteller visited us today and told us about the sun, the moon, and the four seasons,” Diana al-Wahub, a displaced 11-year-old girl from the Tell Dibis village in the countryside of Idlib, and now residing in one of the camps in al-Zalanah in north Syria, told Al-Monitor.

Ahmed Taha al-Shahoud, a 12-year-old boy who was displaced from the city of Maarat al-Numan in Idlib and residing in a camp at al-Zalanah, told Al-Monitor that a storyteller recently told him and his friends a story about the eclipse of the sun.

The only life experiences that camp children have known focus on cannons, airstrikes, and the bitterness of displacement, so the recreational initiatives launched during the month of Ramadan serve as a space of hope in their lives that brings back some of the laughter that the war deprived them of.