Sally Shalabi, a Palestinian-Jordanian storyteller, reinterprets the folk tales of the past to suit the events of the day, where women take on a more prominent role and are no longer bystanders. 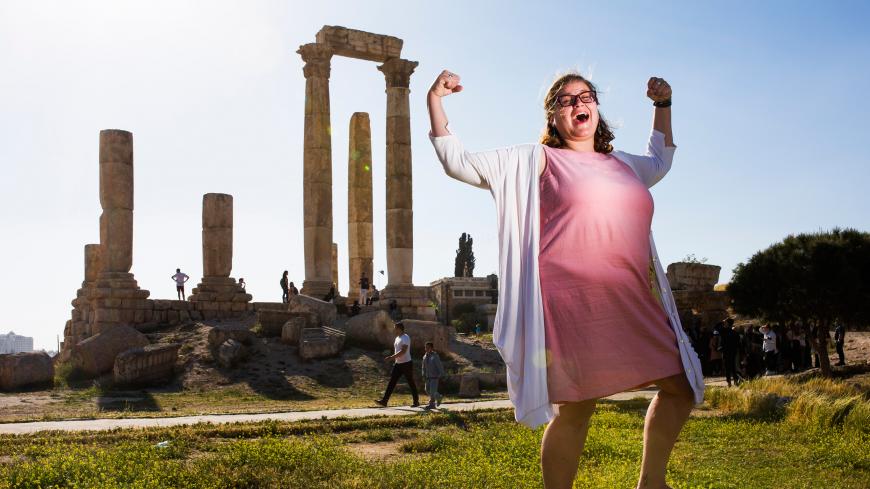 When Sally Shalabi tells one of her stories, her strong and clear voice resonates with her audience in Jordan. Performing in cultural centers in the capital, Amman, as well as in refugee camps all over the country, the storyteller performs for large audiences, including children and the elderly, with a touch of humor and irony. She also sings, dances and impersonates. She plays the tambourine and sometimes uses an object such as a ring or a hat that symbolizes the story and its protagonists.

As a female storyteller, she changed her stage surname, Shalabieh, by feminizing her family name, Shalabi. She also refers to herself professionally as hakawatieh, a feminine version of the word hakawaty, which means storyteller, even though it is uncommon for such a grammatical change to be made in Arabic. Women get a new role in her stories as protagonists rather than passive characters.

The Palestinian-Jordanian storyteller, who lived in Kuwait until the age of 12, told Al-Monitor, “There are some traditional stories where the woman is passive — a pretty woman just trying to get married — and this is not the only narrative we want.”

She said that because she is the storyteller, she can change the narrative. "By shifting the dynamics, the stories — and women — have more power and are smarter. We want a smart society, not a society that is cute,” she said.

Shalabi borrows from the rich tradition of folk tales — local and global — and brings a new twist to them, by playing with names, characters and elements of the story and turning traditional story settings into new, contemporary ones.

“A lot of things happen in storytelling,” Shalabi said. “I first read the story on my own and then I play with it. I can flesh out a character, I can make the story longer, I can give some of the characters a new voice or a [more interesting] life or I can make a character flat. The story is not on paper, nor in a novel — it is oral tradition, there are feelings and changes; the stories and characters are alive.”

Shalabi’s work needs to be seen against the background of storytelling, which has a long tradition in Jordan and, more broadly, in the Arab and Mediterranean world. Storytelling is a traditional profession in many different cultures. It was a popular community art form that not only entertained, but also ensured social cohesion, cultural production and communal memory. Recently, there has been a return to and appreciation of the original work of storytellers. This is happening at the same time as the revival of oral history, which is regaining a space in the contemporary societies of Arab cultures.

Women had a role in traditional storytelling, as symbolized by the character of Sheherazade, whom we generally connect to both storytelling and the Arab world. The famous queen and storyteller of “One Thousand and One Nights” has been more widely explored recently by feminist literary criticism. Many contemporary Arab feminist writers such as the Moroccan sociologist Fatema Mernissi reappropriate her powerful role, underlying the strong and smart personality of a woman who has influenced literature, narratives and the concept of storytelling.

During the holy month of Ramadan in 2017, Shalabi’s weekly performances took place at night, after iftar, the meal which ends the fast, and many people in the audience chose them over the popular TV soap operas.

“Storytelling can create a space for imagination,” Shalabi said. “We went to Syrian refugee camps several times, and we provided a space for childhood simply by creating a story. It is not just the performance that lasts 30-45 minutes; it is remembering, creating and opening the mind. It is not about the values, it is about creating a space for imaginations. Sometimes we forget this space as adults. I tell stories to the children and everyone is expecting the children to have fun. But if you look at the adults, they are engaged, they are listening, they are participating and they are amazed. It is beautiful.”

Shalabi sprinkles her tales with contemporary themes such as the dilemma between the changes brought by neoliberalism and efforts to maintain traditional professions in Amman. When in 2014 the greater municipality of Amman decided to remove the street vendors and their small “tables” — which are called “bastas” in Jordanian dialect — at which many vendors try to sell their wares downtown, Shalabi decided to create a public performance about this decision that could have left many people unemployed.

She wrote a short story about a young woman who set up her “basta” downtown. All the vendors are surprised by this woman’s “basta” because it is one nobody has seen before — it is Ikea-made. With this public performance, Shalabi showed solidarity with the street vendors and challenged gender norms in public spaces.