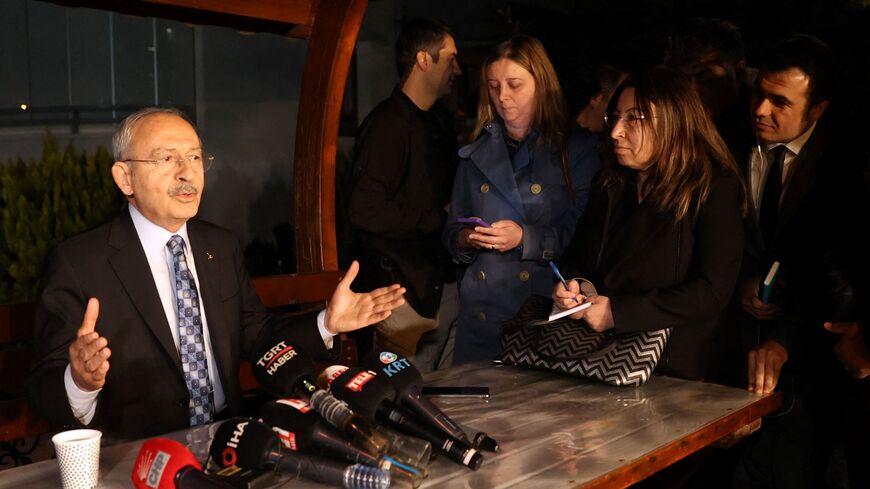 Kemal Kilicdaroglu, chairman of the Republican People's Party (CHP), whose power was cut off at his home, makes a statement to the press in the garden of his house in Ankara on April 21, 2022. Turkey's opposition leader said on April 21 that his power supply had been cut after he stopped paying electricity bills in protest at soaring prices that he blamed squarely on President Recep Tayyip Erdogan. - ADEM ALTAN/AFP via Getty Images

Energy prices have been rising at a shocking rate in Turkey. In the first days of 2022, price hikes reached some 127%. Households and businesses tried to protest in frustration. Turkish President Recep Tayyip Erdogan and officials of his ruling Justice and Development Party (AKP) have made repeated promises for price adjustment since February.

On Feb. 9, the chair of the main opposition Republican People’s Party (CHP), Kemal Kilicdaroglu, announced that he would not pay his electricity bills until the promised readjustment comes.

According to Turkish journalist Seyit Tosun, Kilicdaroglu’s decision has been aiming to help hundreds of thousands whose electricity was cut off due to unpaid bills.

“The goal is to stand in solidarity with 70 million people in Turkey facing poverty as they can no longer afford basic goods. The goal is to create a collective difference,” Tosun told Al-Monitor.

On April 21, Kilicdaroglu announced on social media that his electricity was cut off. Describing his protest as a resistance, he stressed that it was an individual act and called on his supporters to refrain from any street protest to support him.

According to Serkan Tanyildizi, a social media expert, the protest has been the second-most important action of Turkey’s political opposition after the Kilicdaroglu-led justice march from the capital Ankara to Istanbul in support of arrested journalists and dissidents in Turkey. Kilicdaroglu’s peaceful resistance methods earned him the nickname “Gandhi.”

After losing his electricity at home, Kilicdaroglu visited two households that were also in the dark due to unpaid bills. Women with children were the sole breadwinners at the both households. Pictures of the families sitting in the dark hit a nerve among the senior AKP figures.

According to Kemal Ozkiraz, founder and chairman of Avrasya polling company, Kilicdaroglu’s individual protest along with growing public outcry have pushed the government to take action. “Government had to adjust the prices for small and medium size businesses from 127% to 50%. Most experts were expecting another 30% price hike, which has been delayed," Ozkiraz told Al-Monitor. "All of these are small but important achievements of this protest." The lower-income households are AKP’s core constituents, he said, and "when they see Kilicdaroglu standing by their suffering, it inevitably hits a nerve for the government.”

Following Kilicdaroglu’s visit, Energy Minister Fatih Donmez claimed that Kilicdaroglu’s electricity was not cut off on the day that he claimed. But the main opposition leader provided documentation forcing Donmez to back down.

Following that Twitter brawl, Donmez later claimed that one of the households Kilicdaroglu visited did have power, saying that the visit in the dark was all staged. In reply, Kilicdaroglu tweeted a short video in which the hostess thanked officials for turning the power back on, refuting Donmez’s claim once again. This was widely seen as a success for Kilicdaroglu’s campaign.

“I call on the palace to turn back all the households’ power, or I swear to God I will visit all of them,” he wrote on Twitter, referring to Erdogan's palace in Ankara. Many subscribers reportedly have their power back despite their unpaid bills.

According to a political scientist Burak Ozpek, right-leaning opposition parties do not embrace Kilicdaroglu’s rhetoric despite its success.

“Although those right-leaning parties criticize government’s public policies, they do not take a structuralist attitude and refrain from leftist populist actions. I think they did not know how the public would react, so they couldn’t situate themselves in a proper place to react accordingly,” he told Al Monitor that

Good Party leader Meral Aksener’s recent statement can be seen as a case in point. “I can pay the electricity bill on behalf of Kilicdaroglu. I would do that in support of Mrs. Kilicdaroglu,” she said on April 21, after the main opposition leader’s electricity was cut off.

“Economic downtowns in Turkey have always hit the Kurdish regions harder, and this one is no different. So Kilicdaroglu’s stand resonates with the Kurds more than any other segment of Turkey’s population.” Ozcan told Al-Monitor. But, he added, “It is going to take more than sitting in the dark for a week in order for the Turkish opposition to make inroads with the Kurdish electorate."