In a critically timed spring offensive, Turkey has hit dozens of targets associated with the outlawed Kurdistan Workers Party and killed 19 fighters. 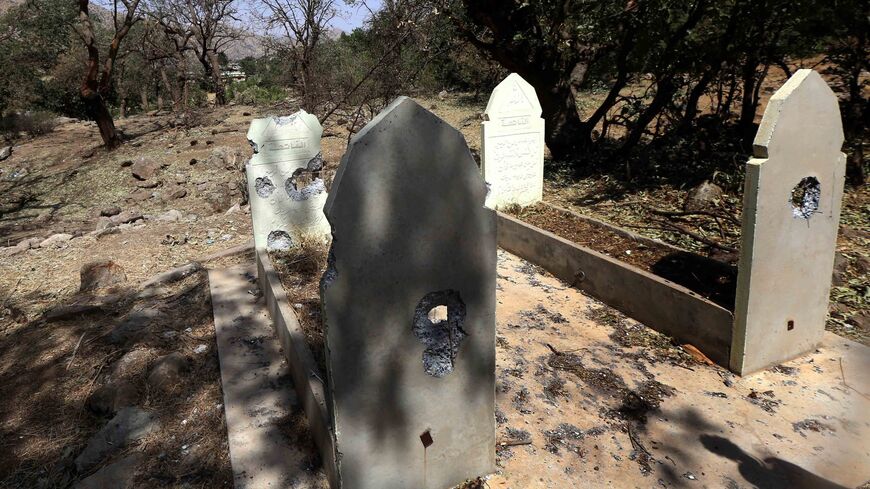 A picture taken on July 29, 2015, shows graves that were reportedly damaged in an airstrike by Turkish warplanes against Kurdistan Workers Party positions in the Qandil mountains, the PKK headquarters in northern Iraq. - SAFIN HAMED/AFP via Getty Images

The air and ground offensive, codenamed Operation Claw Lock, began in Metina, Zap and Avasin-Basyan in Iraqi Kurdistan in the early hours of Monday. Sharing images from the operation, Defense Minister Hulusi Akar said that Turkish jets have struck shelters, bunkers, caves, tunnels, ammunition depots and the military headquarters of the PKK. The separatist group uses its bases in northern Iraq to stage attacks on Turkey. It is considered a terrorist group by Turkey as well as the United States and the European Union.

“The operation was launched to fend off a large-scale attack by the PKK, which was regrouping and establishing new bases in certain areas of northern Iraq,” Omer Celik, spokesperson for the ruling Justice and Development Party (AKP), said at a press conference late Monday.

“Ideally, our neighboring countries should be able to oust the terrorist groups from their territory themselves,” Celik said in an apparent reference to Syria as well as Iraq. “But since they do not appear to be able to do that, we have to protect our people, based on the right of self-protection enshrined in Article 51 of the UN Charter.”

Akar, a former chief of staff, pledged that the operations “would continue until the last terrorist was dead” but assured listeners that civilians and the religious and cultural heritage of the region would not be harmed. In a video statement, Akar said that four Turkish soldiers had been wounded and 19 suspected PKK militants had been killed.

The Defense Ministry said various Turkish artillery units stationed in the region had hit targets before the air operations. “Our heroic commandoes and maroon berets — supported by attack helicopters, unmanned aerial vehicles, armed unmanned aerial vehicles — arrived on the scene by land and by air and captured the determined targets,” Akar noted in the video, in which he is seen talking to pilots on the phone.

Operation Claw Lock follows twin offensives codenamed Claw Lightning and Claw Thunderbolt in 2021 and Claw Eagle and Claw Tiger in 2020. The Claw operations aim to prevent the PKK militants’ movement between their bases, which spread from the Qandil Mountains on the Iraqi-Iranian border to the Syrian frontier. Though Turkey has carried out numerous large and small cross-border operations into Iraq, the Claws have been increasingly ensuring that Turkey gets a permanent foothold in the region, particularly in Metina and Zap. Last year, Interior Minister Suleyman Soylu said that Turkey would establish a base in Metina to monitor the region and control the route to the mountains on the Iraq-Iran border, where the central command center of the PKK is based.

Though Ankara said that the attacks had started Sunday, Rudaw English reported that at least two villages — Sararo and Hirore — had been bombed last week.

Asked by Agence France-Presse to comment on Turkey’s operation, a PKK spokesperson in Iraq said on condition of anonymity, “The occupation army, which tried to land troops by helicopters, also wanted to advance by land.” Referring to the PKK’s military wing, he added, “There are intense clashes between the Turkish army and HPG guerrillas.”

Both Kurdish and Turkish experts agree that the mountainous terrain would make the operation difficult for the Turkish side. “This will not be a swift operation. It will take weeks, if not months,” Mehmet Okkan, a retired general who headed the ops center under the Turkish chief of staff, told the local press.

“The Zap area is key,” Erkan Afsar, an international relations scholar in Van Yüzüncü Yıl University, told state-run TRT, referring to the mountainous area where there is a complex web of PKK tunnels and hideouts. “It looks as if Turkey will seek to hit targets there and then move further down.”

The administrator of @MapKurdistan, a Twitter account that anonymously provides reporting from the ground, told Al-Monitor that Turkish commando units and special forces have made no advance attempts in the Basyan and Metina, though these two areas are likely to be targeted in the next or the third phase.

President Recep Tayyip Erdogan met over the weekend with Masrour Barzani, the prime minister of Iraq's autonomous Kurdish region, which controls the areas where the Turkish incursion took place. Erdogan reportedly told Barzani of the operation.

Members of the ruling party and Erdogan’s top aides lauded the operation. “Trust in friends, fear among our enemies. May our soldiers run to new victories,” tweeted Ibrahim Kalin, Turkey's presidential spokesperson.

The operation comes amid growing discontent among Turks over the soaring inflation rate and skyrocketing prices, particularly on food and lodging. While a spring operation was expected — including by the PKK — its high-profile beginning is seen by many as an attempt by the government to distract public attention from its predicaments. Others think it is a way to stir popular sentiment against the pro-Kurdish Peoples’ Democratic Party (HDP), which is fighting a lawsuit for its closure. Several of its members are charged with links with the PKK.

The HDP condemned the operation, tweeting, “The military attack on Kurdistan Regional Government’s territory is illegitimate and against international law. While seeking to portray itself as a peacemaker in the Ukraine-Russia war, AKP has shown its true face. This war is about AKP's survival, we cannot remain silent!”