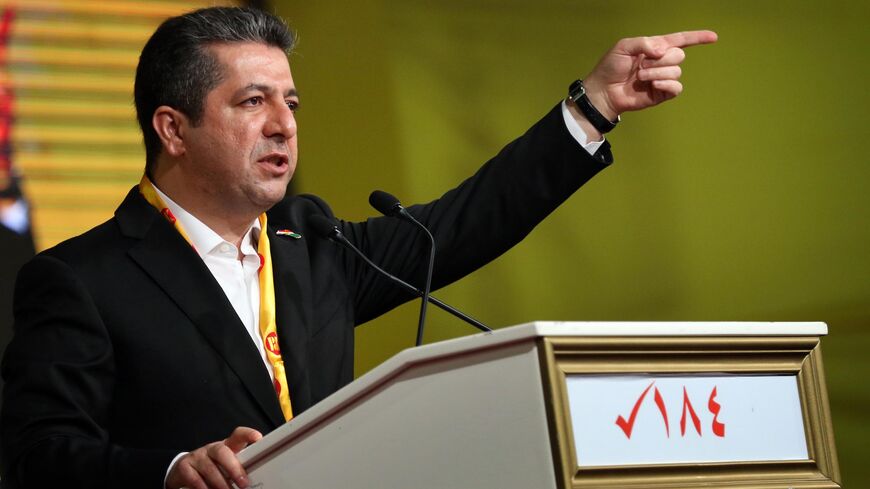 Head of the Kurdistan Regional Security Council Masrour Barzani speaks during an electoral rally for the Kurdistan Democratic Party (KDP) list, in Arbil, the capital of the northern Iraqi Kurdish autonomous region, on April 26, 2018. - SAFIN HAMED/AFP via Getty Images

Prime Minister of the Kurdistan Region of Iraq Masrour Barzani is set to travel to Istanbul today where he will meet with Turkish President Recep Tayyip Erdogan, Al-Monitor has learned.

This will be the prime minister’s second official trip to Turkey since taking office. The delegation traveling to Turkey includes KRG Foreign Minister Safeen Dizayee. It comes ahead of Barzani's trip to the UK.

Barzani’s trip comes before an expected new Turkish offensive against Kurdistan Workers Party (PKK) militants inside Iraq’s Kurdistan region. The PKK accuses the KRG of collaborating with Turkey in carrying out attacks against the group in the autonomous region.

Ankara and Erbil have strong security and economic ties. Iraqi Kurdish oil that is pumped to export terminals on Turkey’s southern Mediterranean shore is a critical source of income for the region.

The war in Ukraine and subsequent Western sanctions on Russia, including its oil and gas sales, have prompted a search for alternative energy supplies globally — and Iraq, with its massive hydrocarbon reserves, is an obvious choice.