Citizens of Syria, Egypt and two locals were arrested in relation to the incident, according to state media. 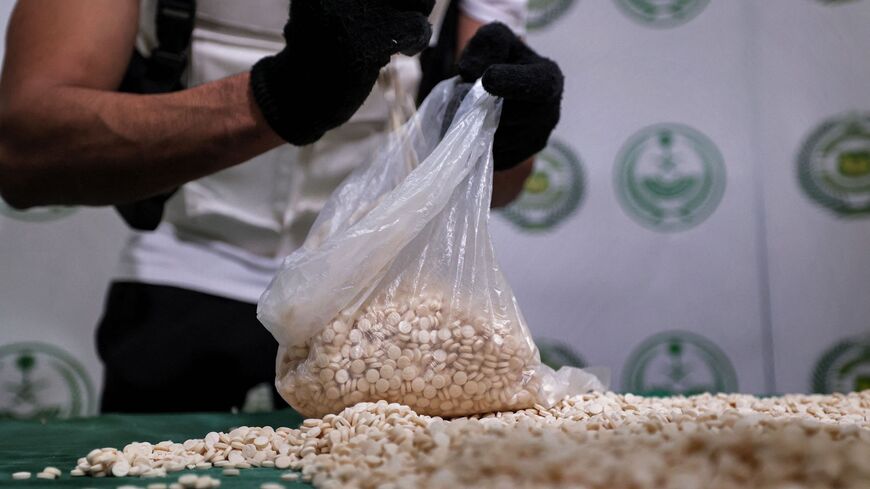 An officer of the Saudi Directorate of Narcotics Control empties a bag of Captagon tablets seized in the Red Sea coastal city of Jeddah on March 1, 2022. - FAYEZ NURELDINE/AFP via Getty Images

Saudi authorities reported early Thursday that another attempt to smuggle narcotics into the country has been thwarted as its drug war continues.

The General Directorate of Narcotics Control said that 456,000 amphetamines pills were found hidden in hidden in machinery including spare parts for elevators and other equipment. Three Egyptians, one Syrian and two Saudis were arrested in relation to the incident. The individuals were the intended recipients of the drugs, the official Saudi Press Agency reported.

The drug Captagon, which is widely distributed and used in Saudi Arabia and the Middle East, is a stimulant similar to amphetamines.

Why it matters:  The bust is the latest result of Saudi Arabia’s efforts to stop the flow of drugs into the country. Earlier this month, the Zakat, Customs and Tax Authority seized 1.5 million Captagon pills at the Jordanian border. In March, 1.6 million of the pills were seized at the Red Sea port of Jeddah. There were also major Captagon busts in February and January.

Many of the drugs bound for Saudi Arabia are used domestically. In 2020, the peer-reviewed journal Substance Abuse Treatment, Prevention, and Policy reported that 7-8% of Saudis had used drugs, with amphetamines among the most common. Most drug users in the country are between 12 and 22.

Know more:  The Captagon trade is a problem throughout the region. Last week, the DC-based Newlines Institute published a report showing that elements within the Syrian government are complicit in the production and smuggling of the drug.

Lebanon is also a source of Captagon pills, and authorities there have stepped up counter-narcotics efforts amid pressure from the Gulf. In December, Lebanese authorities said they thwarted an attempt to smuggle 9 million Captagon pills to an unnamed Gulf state.