The stimulant is widely sold and used in the Middle East, creating a market worth billions of dollars. 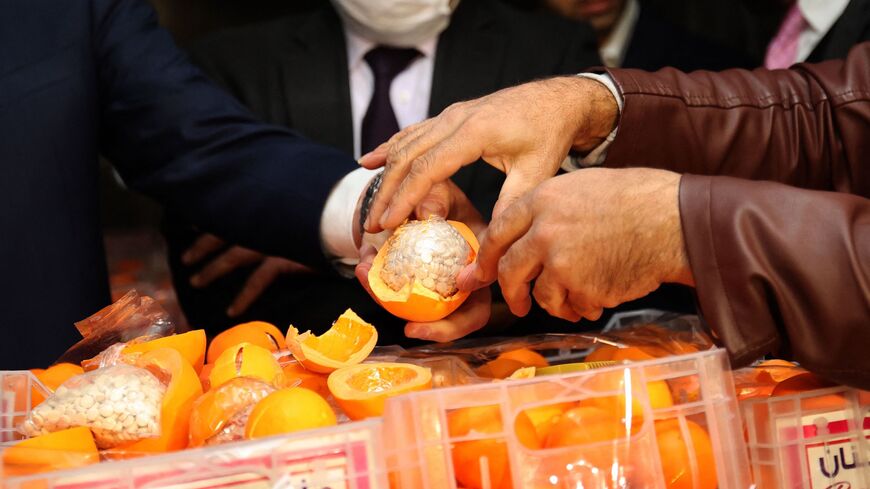 A man shows fake oranges filled with Captagon pills hidden in boxes containing real fruit, after the shipment was intercepted by the customs and the anti-drug brigade at the Beirut port in the Lebanese capital Dec. 29, 2021. - ANWAR AMRO/AFP via Getty Images

Saudi authorities said today that they thwarted more attempts to smuggle millions of Captagon pills into the country.

The Zakat, Tax and Customs Authority said in a press release it found 2,060,000 pills of the drug hidden in boxes of gloves at the Jeddah port and an additional 423,926 pills in a shipment marked as oranges at the Duba port. Both ports are located on the Red Sea.

The General Directorate of Narcotics Control arrested three people alleged to be the intended recipients of the pills, according to the press release.

Captagon is the market name of the drug Fenethylline, which is a stimulant that shares many properties and characteristics with amphetamines. It was originally used to treat depression, narcolepsy and other disorders, but is now widely illegal due to its addictiveness.

Captagon has received considerable media attention in recent years for its sale and use by Islamic State fighters as a performance enhancer in battle.

Saudi Arabia is no stranger to Captagon smuggling. Last month, customs authorities in Jeddah seized millions of the pills hidden in onions. In December, they seized more than 800,000 pills in the port. Saudi Arabia is a major market for Captagon and demand for the drug in the kingdom is relatively high.

The Captagon trade has become a billion-dollar industry. In 2020, Italian police seized 84 million Captagon pills they said were worth $1.1 billion and being used to finance IS.