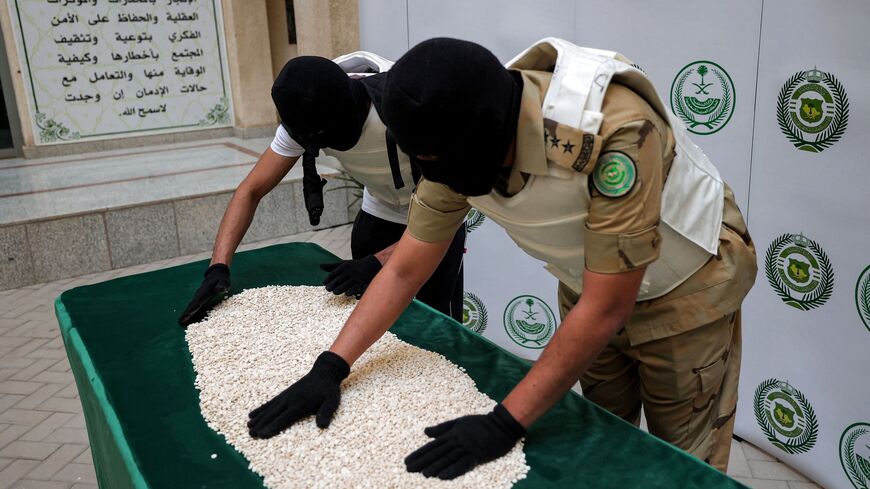 Officers of the Directorate of Narcotics Control of Saudi Arabia's Interior Ministry sort through tablets of captagon (Fenethylline) seized during a special operation in the Red Sea coastal city of Jeddah on March 1, 2022. - FAYEZ NURELDINE/AFP via Getty Images

Saudi authorities Friday thwarted another attempt to smuggle Captagon pills into the kingdom.

The Zakat, Tax and Customs Authority said 1.6 million pills were hidden in a “caravan” in the Red Sea port in Jeddah. Three people were arrested in relation to the incident, the authority said in a press release.

What is Captagon? Captagon is the market name of the drug Fenethylline — a stimulant that shares many characteristics and properties with amphetamines. Fenethylline was originally used to treat depression, narcolepsy and other disorders, but the drug is now widely illegal because of its addictiveness. Captagon has received significant media coverage in recent years because of its use and sale by Islamic State fighters. The group has reportedly used the drug as a performance enhancer in battle.

Why it matters: Captagon’s use and sale is widespread in the Middle East, particularly in Saudi Arabia. The Zakat, Tax and Customs Authority also seized Captagon shipments in January and February of this year.

Friday's bust comes after Saudi authorities pledged to crack down harder on the Captagon trade.

The Captagon trade has become a billion-dollar industry. In 2020, Italian police seized 84 million Captagon pills that they said were worth $1.1 billion and being used to fund IS.

What else: Saudi police in the Mecca region said Friday that they arrested two people who were allegedly transporting 20 kilograms (44 pounds) of hashish, the Saudi Press Agency reported. Hashish is a cannabis drug that is popular in the Middle East.