Another Captagon bust in Saudi Arabia as drug war continues

The discovery of more than 3 million pills of the drug in Dammam on the Persian Gulf is at least the fourth bust in Saudi Arabia this year. 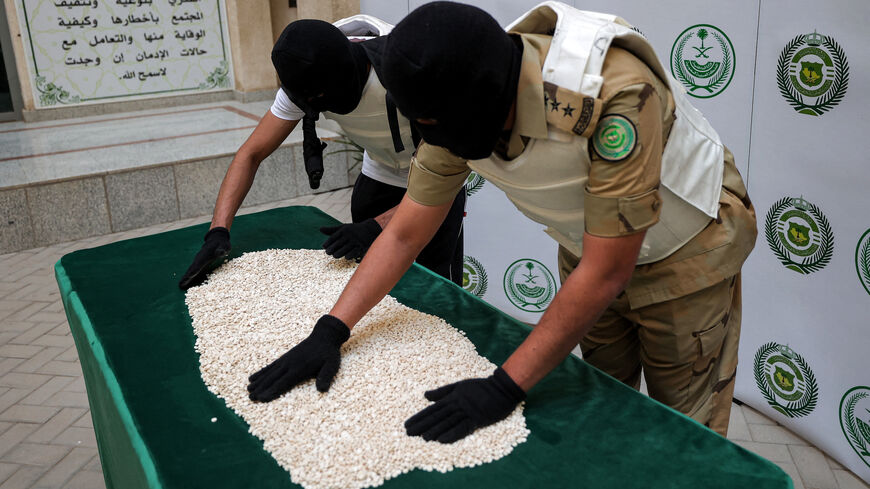 Officers of the Directorate of Narcotics Control of Saudi Arabia's Interior Ministry sort through tablets of Captagon seized during a special operation and presented before Agence France-Presse afterward in the Red Sea coastal city of Jeddah on March 1, 2022. - FAYEZ NURELDINE/AFP via Getty Images

Saudi authorities thwarted another attempt to smuggle Captagon into the kingdom today.

The Zakat, Customs and Tax Authority said they found more than 3.7 million pills hidden in iron pillars in the port city Dammam on the Persian Gulf. Two people were arrested for allegedly participating in the drug shipment, according to a press release.

Why it matters: Saudi Arabia is in the midst of a major drug war fueled by a high degree of Captagon use by the population. Around 8% of Saudis have used amphetamines, heroin and other drugs, including many youth, according to one study. Captagon is a type of amphetamine.

There have been numerous Captagon busts in Saudi Arabia this year, including the following:

Earlier this week, the Saudi Border Guard said they thwarted smuggling attempts of amphetamines, hashish and the chewable plant drug khat at both the northern and southern borders.

Know more: Captagon is a major business throughout the Middle East, including in Syria, Jordan and Lebanon.