Sexuality, the performance of gender, and religious and socio-political ideologies are at the forefront of Omani artist Eman Ali's art, and her hybrid of artistic expression ranges from photography to installation. 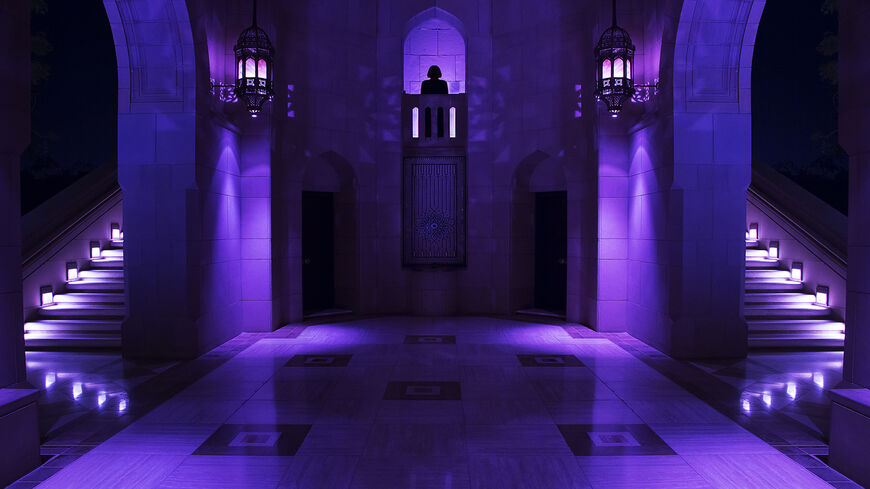 There are times in which both the life and work of an artist are in communication, representing a stance against conservatism, and paving the path for others to express themselves more freely. This is certainly the case with Omani photographer Eman Ali, 36. “Through my life and art I want to leave a legacy of courage,” told Al-Monitor. “I hope to inspire future women, especially those living in Oman, to be brave, to push against the grain and harness the power of their own voice and creativity.”

One of the hottest and boldest artists from the Gulf, Ali is a sophisticated woman whose attitude and allure recall Italian singer from the 1960s Mina. Born in London and raised in Oman, she constantly travels between London, Manama and Muscat, realizing much of her work in the Gulf, and reviving her connection and roots in these three cities.

Her artworks are rich in both tradition and an empowered representation of women, confronting the history of the Arabian Peninsula. In her work, Ali heavily draws inspiration from her own background and life experience, and she is not afraid to question the cultural intricacies of Khaleeji societies, constantly reflecting on national identity, history, memory and loss.

Recently gaining representation by the all-women artist Hunna Contemporary Galley, Ali started off with documentary photography, and slowly integrated light, video and sound to create installations. Today, she employs different mediums depending on the context, but her cinematic aesthetic mixed with an Arab feminist sensitivity remains extremely recognizable.

The beginning of Ali’s interest in art started in her childhood. “I was always drawn to art but was never really good at drawing or painting. I never thought of becoming an artist; I wanted to be a forensic scientist,” she said.

Ali mentions her brother as the one who helped shape her artistic sensibilities. He handed her down his Canon camera when she was just 10. She recalled, “From then on my photographic journey began. I discovered photography was the perfect medium for me to play with.”

Ali left Oman when she was 18 to pursue her studies in graphic design in London. “Being away allowed me to appreciate my country and cultural traditions more,” she noted. “The distance helped me look at familiar things with a fresh pair of eyes. This new perspective opened up exciting ways of seeing that I began exploring in my work.”

After she graduated with a Master of Arts in Photography, she started doing documentary photography upon her return back home, observing culture and social life in the Arabian Peninsula. She honed her reporter and journalistic eye during the 2011 uprising in Bahrain, where she lived at the time, and created the black and white photo series “Pearl,” documenting peaceful demonstrations at Manama's Pearl Roundabout, which at the time was occupied by a community of protesters, opposing the government’s laws, political arrests and the ruling family’s grip on power.

The following year, she investigated the LGBTQ+ community in Bahrain with the photo series “Wendy’s,” focusing her exploration on the homonymous unofficial gay club and a safe space for the community to come together. In the series, the news coverage of the political unrest in Bahrain was juxtaposed with the sheer instinct of liveliness at Wendy’s.

The reflections on her identity as a woman within a heavily traditional society became increasingly evident over time, and her work shifted more from documentarian to representation, as she became interested in visual art. An example is "Her Holeyness” (2017), an installation composed of luminous panels and video screens, where she recreates commercial presentations of female bodies, who are continually asked to be cleaning and purified in Arab culture. Her idea was to question the place of the woman and societal expectations by using the visual language of advertising.

Her latest project — “Succession” — a book created by collecting visual archives from the 1970s, opens up a new chapter in her artistic practice and focuses on the figure of the late Sultan Qaboos bin Said, who had a big impact on the development of the entire Omani nation. “The period before his rule — pre-1970s — was described as the dark ages,” Ali explained. “Many restrictions affected people’s day-to-day lives. There was no proper infrastructure in the country at that time with only three schools and two hospitals available.”

When the sultan ascended the throne, he began the process of modernizing the state, using oil revenues, by introducing development and social services. Health care and education became accessible to all, roads were paved, new development projects were initiated and job opportunities were created. Women became active participants in the workforce and contributed to political decisions. He also played a pivotal role in uniting the country as one by ending the tribal feuds. An indication of this is the change in the name from Oman and Muscat to simply Oman.

“Everyone was empowered to work toward the country’s progress," Ali noted. "It’s a huge leap from how things used to be and greatly impacted the generation that was born after this time for the better, including myself."

Ali found her first inspiration for “Succession” in her father’s collection of publications called “Oman.” These were newsletters published by the Omani Embassy in London during the 70s and 80s to inform people within the diplomatic circle what was going on in terms of the development of a new modern state, presenting Sultan Qaboos bin Said as a “Renaissance man.”

“I was immediately drawn to these publications because they served as a time capsule, a record of an era coming to an end. The images themselves were so arresting that I knew I had to archive them somehow,” she said.

To preserve them, Ali decided to scan them in high resolution front to back. At the time, she was also taking iPhone pictures of the photographs in the publication that she felt instantly connected to. “My approach was very instinctual and I just ran with my gut feeling,” she recalled, saying that if there was a certain shape or someone looked interesting in a picture, she would zoom in on it and capture it. “I appropriated the images on the camera. I had no clear idea of what I was going to do with all these photos, but knew that I would use them for something in the future.”

Shortly after, David Drake, director of Ffotogallery in Wales, contacted her about the exhibition “The Place I Call Home” and commissioned her to produce a new body of work that related to the theme. The project was to be shot in Oman and since the country was at a very critical stage politically, Ali wanted to make something relevant to the time. “The images that I had previously collected then began to make sense to me as a body of work to explore,” she explained.

The captured images were reworked to create a series of cropped images arranged into a sequence. “It was a challenge that inspired me to create. The book for me was a way to question my own understanding of the modern history of Oman, to explore the unreliability of memory and to show the important role photography had in reinforcing a new national identity,” she noted.

In the selection of images, Ali chose to show the viewer her subjective viewpoint in a sort of reverse-Orientalism. “I wanted to employ their methodology and subvert the white colonial gaze to reintroduce these images from my own perspective as an Omani woman,” she added.

Ali’s explorations into Oman's national history are still ongoing. The artist is currently completing a series of photographs captured in Oman as part of a historic project that will live on the blockchain. She has also set up a temporary studio in Oman where she will be expanding her practice outside of photography.