Iraq's new parliament has failed to form a government and the political scene is stuck in a difficult deadlock, indicating that the crisis is likely to continue for a long time. 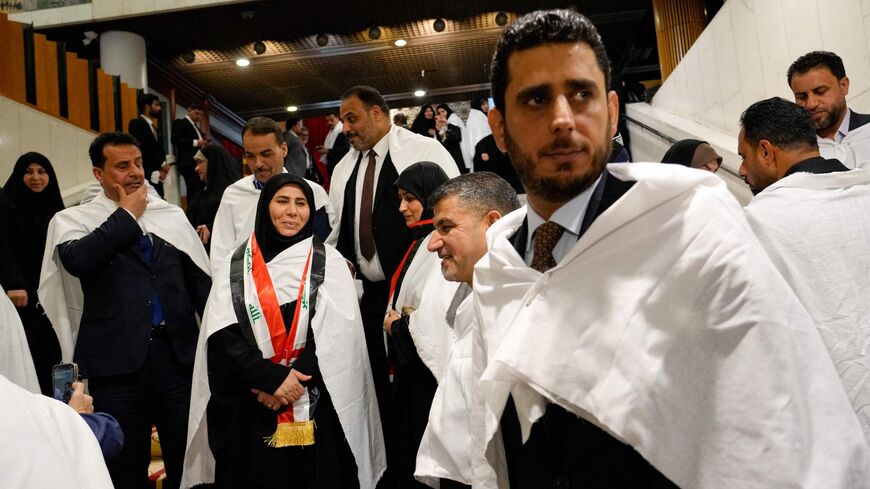 Iraqi members of the Sadrist bloc (of Shiite leader Muqtada al-Sadr) gather inside the Iraqi parliament in the capital, Baghdad, ahead of the country's presidential election, on March 26, 2022. Iraq's parliament today postponed once again a session to elect the country's new president over a lack of quorum. - AHMAD AL-RUBAYE/AFP via Getty Images

About six months after Iraq's parliamentary elections, the new government has yet to be formed. What are the possible scenarios and consequences?

Background: Iraq's elections were held on Oct. 10, 2021, about six months before the regularly scheduled elections, in response to the demands of protesters in 2019-2020. They were supposed to provide a solution to the political crisis in the country that had led to about a year of protests that included violence against protesters, with about 600 killed and 30,000 wounded. But it appears that the elections not only had not come with workable solutions but had also added fuel to the fire.

The elections have resulted in two opposing axes: the Coalition for Saving the Homeland, and the Coordination Framework. The first is a cross-sectarian alliance between the Sadrist movement (74 seats), the Sunni Coalition of Sovereignty (consisting of two Sunni groups led by Mohammed al-Halbusi and Khamis al-Khanjar with 62 seats), and the Kurdistan Democratic Party led by Massoud Barzani (with 31 seats). The Coalition secured a minimum majority of 167 seats out of 328, which allowed them to go ahead with the selection of parliament speaker Halbusi.

However, the Coalition faced great challenges in obtaining the absolute majority of two-thirds members, which is required to select a president. Although they tried to attract about 40 independent members to join them, the total number of 202 gathered in parliament was not enough. Therefore, the Coordination Framework, consisting of Shiite political parties close to Iran, allied with the Patriotic Union of Kurdistan with 29 seats and a small Sunni group led by Muthana al-Samerai, were able to form a blocking third preventing the first coalition from going ahead with the government formation. After failing three times to select a president, Sadr withdrew from forming a government, passing the ball to the Coordination Framework to form the government alone and giving it 40 days to do so beginning March 31. It seems both groups are unable to form the government alone, and the challenges are likely to continue for a long time. What are the possible scenarios?

Scenario 1: The two sides reach an agreement to form a consensual government together and share the government based on a credit point system, which was common after 2003. Accordingly, each party will get a share in the government based on the number of seats they won in the elections. This is unlikely to happen this time due to Sadr's demands to form a majority government, rejecting any proposal to reach an agreement with the Coordination Framework. He has tried several times to break up the Coordination Framework and convince some of its groups (Fatah, led by Hadi al-Amiri, or State of Law, led by Nouri al-Maliki) to join him separately. However, the Coordination Framework appears solid, rejecting any offer that does not include all of them in the new government. On the other side, Sadr is facing great pressure from his social base as he had promised them since the beginning of his electoral campaign to form a majority government with the Sadrist prime minister. Sadr has nominated his cousin, Jafar al-Sadr, the son of prominent political cleric Muhammad Baqer al-Sadr, for the prime minister position. Now it is difficult to withdraw from this promise, as it would lead him to great losses in the next elections.

Scenario 2: A Sadr-Halbusi-Barzani coalition obtains the remaining required numbers to select a president and go ahead with forming a government. They have already gone through negotiations with possible allies like the PUK and independent members. But it seems difficult to achieve this goal, especially after they failed to do so three times.

Scenario 3: The current government continues indefinitely as a caretaker government, and another early election is held sometime in 2023. This is likely, due to the fact that the constitutional deadline for forming the government has already passed and the political parties have failed to form a government. Meanwhile, the two axes will compete in dominating parliament and expanding their influence in state institutions. They will also work on changing the electoral law to their benefit for the next elections, which will create another source of conflict between them.

In such circumstances, it seems the political deadlock is likely to remain for a long time and the conflict between the two sides is unlikely to be resolved, which means any newly formed government, if such occurred, would be weak and subject to collapse soon.