Outspoken Reformist Faezeh Hashemi has invited furious attacks from hard-liners after suggesting that the United States should keep the Islamic Revolutionary Guard Corps on its terror list. 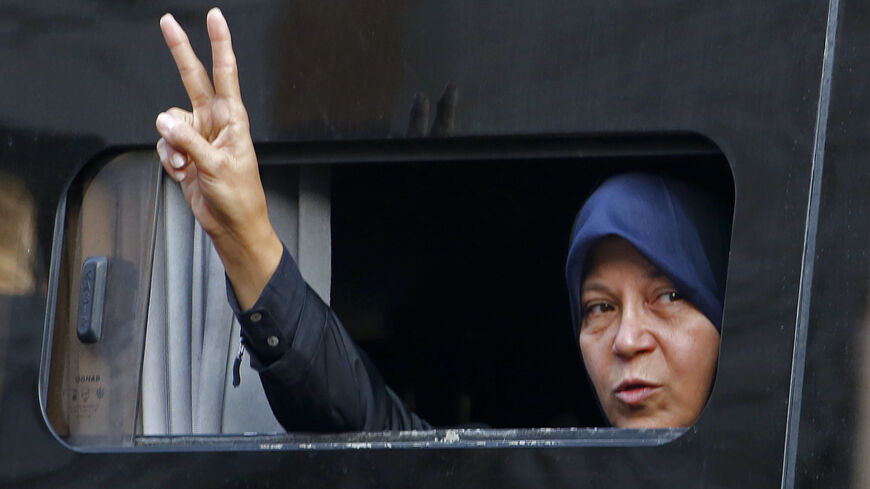 "She has practically acted as America's infantry inside Iran," wrote Fars News Agency, which is affiliated with the Islamic Revolutionary Guard Corps (IRGC). The chain of cutthroat pieces targeted Faezeh Hashemi — a senior Reformist activist, former parliamentarian and daughter of late moderate ex-President Akbar Hashemi Rafsanjani — over her unprecedented diatribes against the powerful military organization.

Addressing a meeting on the social media platform Club House on April 17, Hashemi stressed the need for the IRGC to "retreat to its bases" because it "has been expanding its scope of activities on a daily basis."

In Hashemi's view, the only way for such a return is for the force to remain on the US list of Foreign Terrorist Organizations (FTO). "I don’t believe the removal of the IRGC from the list serves the Iranian nation any good," she declared.

Founded only a few months into Iran's 1979 Revolution, the IRGC was by essence a military organization but enjoyed the blessing of the ruling clerical establishment in its growing rivalry with the regular army. The force's mission has over four decades transcended beyond its military mission, building an empire of wealthy conglomerates before rising as the country's most powerful entity, which has faced accusations of prevalent corruption with limitless impunity.

The IRGC's missile program and its overseas activities across the Middle East and even beyond have particularly worried Western powers. The force has faced a host of economic sanctions since its establishment. But most notably, in 2019 it became the first government organization to fall under the US FTO list following an order by former President Donald Trump.

A possible IRGC removal from the list has been a sticking point in the course of the now-stalled negotiations between Iran and major powers in their diplomatic push to revive the 2015 Iran nuclear deal. The Iranian negotiators have reportedly rejected with adamance US conditions in exchange for a potential delisting of the Guards.

In light of the impasse in the talks, Fars News underscored the timing of Hashemi's comments that coincided with a moment when "America is throwing wrenches in the works," and suggested that she was fulfilling the US agenda from inside her own country.

The female activist has over the past two decades repeatedly struck nerves among hard-liners, from her stiff opposition to mandatory hijab to her 2016 meeting with leaders of the outlawed Baha'i faith. In comments provocative enough to hard-liners, Hashemi approved of Trump's "maximum pressure" policy against the Islamic Republic in the wake of the 2020 US presidential elections. "If I was an American, I wouldn’t vote for Mr. Trump. But as far as Iran is concerned, I wish he had won because his pressure could have triggered some political change in Iran," she said.

"Such comments here and there only best feed the hostile [Western] media," Fars wrote in its lengthy piece, putting together a list of Hashemi's bold remarks. "Such controversial remarks also play into the hands of the enemy on the diplomatic battlefield."