Under tightening livelihood strains and constantly being told to pursue modesty and exercise austerity, the Iranian public saw the trip as a sign of brazen hypocrisy among some senior officials whose private lives are characterized by extravagance. 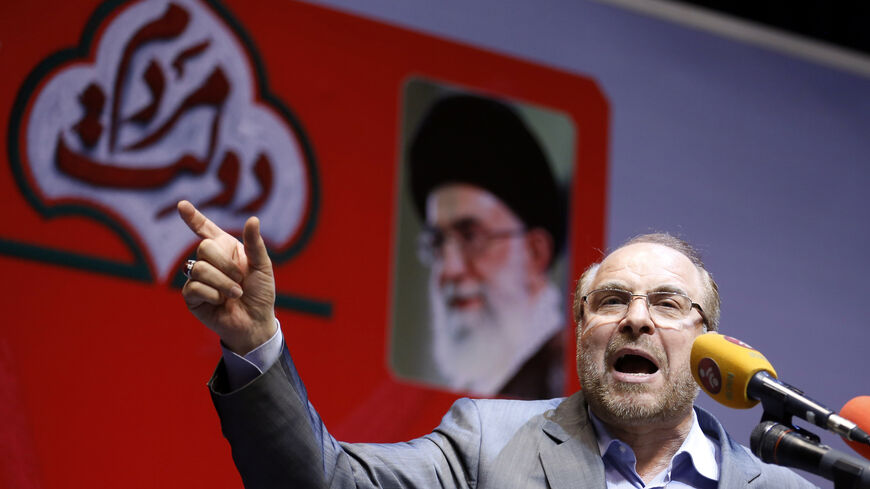 Iranian conservative presidential candidate and Tehran Mayor Mohammad Bagher Ghalibaf gives an address during a campaign rally in the Iranian capital, Tehran, on May 14, 2017. - ATTA KENARE/AFP via Getty Images

Drawing a wave of rage from Iranians, the pictures were initially posted in a chain on Twitter by well-known whistleblower Vahid Ashtari, who said he had confirmed the identities of Ghalibaf's wife, daughter and son-in-law with staff at Tehran's international Imam Khomeini Airport.

Ghalibaf's son, Elias, although not involved in the trip, was quick to issue an apology of his own in an Instagram post, criticizing his sister and brother-in-law for their "unforgivable wrongdoing" by traveling abroad at a moment when ordinary Iranians are grappling with economic hardships. Yet he denied reports that the family visit was meant for shopping for a layette set for his yet-to-be-born nephew or niece.

The speaker's son expressed regret at how the family trip "will now make all past accusations leveled against my father appear credible." He claimed that despite the parliament speaker having opposed the trip, his daughter and son-in-law had proceeded with it regardless. Elias did not explain why his mother had also joined the pair despite her husband's disapproval.

A close ally of Supreme Leader Ayatollah Ali Khamenei, Ghalibaf has been facing a chain of fraud allegations, particularly dating back to his tenure as Tehran's mayor (2005-2017). Despite mounting evidence presented by whistleblowers, the Iranian judiciary has never formally charged the former Islamic Revolutionary Guard Corps (IRGC) general.

"Kindly Resign," read an April 21 headline from the Reformist paper Aftab-e-Yazd. "This will be recorded in history: At a time when Iranians were struggling to make ends meet, the parliament speaker's wife and daughter visited Turkey to buy a layette," the paper wrote. The parliament speaker has yet to publicly address the scandal.

Iranian outlets and social media users dug back into presidential debates in 2017, when Ghalibaf ferociously attacked the government of his moderate rival, former President Hassan Rouhani, for conducting a lavish lifestyle. Ghalibaf pledged that as future president, he would represent what he described as the underprivileged 96% of the population in a battle against the affluent, privileged 4%.

"In the face of such bombshell news, he has to resign from all his posts," tweeted Reformist pundit Abbas Abdi. "I am wondering how he would from now on look into the cameras to talk against the privileged 4%."

To soothe public frustration with livelihood strains, Iranian officials have in recent years largely blamed the country's economic crisis on US sanctions, advising citizens to economize on consumption and tighten belts. Contradicting those guidelines, the Ghalibaf family saga appeared to have only added up to previous controversial cases of corruption embroiling senior authorities and their families. And all those cases were juxtaposed with the poignant accounts about a growing number of Iranian kids and teenagers who have committed suicide in the past few years after being pushed over the edge by poverty.

"You cannot stand at the podium, preaching the public on the merits of domestic production … and in the meantime send your own family off shopping in Turkey," Ashtari said in his tweet chain.

To some Ghalibaf supporters, the chaos was mainly rooted in partisan rivalries and an orchestrated campaign aimed at discrediting him. "What a feast they are throwing," wrote Ghalibaf adviser Mohammad Saeed Ahadian. "No matter how exaggerated the wrongdoing is, a father cannot be blamed for his child's deeds."

But Ghalibaf was not spared criticism from some hard-liners either, including members of the Stability Front, whose nominee for the speakership in 2020 lost the battle to the influential politician.

And Javan, a newspaper representing Ghalibaf's fellow comrades in the IRGC, advised him to "keep his eyes wide open." While attempting to set him apart from the scandal, the paper enumerated past Ghalibaf-linked controversies, noting that he ought to be more watchful of the demeanor of his family members. "Will he learn a lesson?"