Tehran said the move to allow Taliban-appointed diplomats was not a step toward recognizing the current establishment in neighboring Afghanistan. 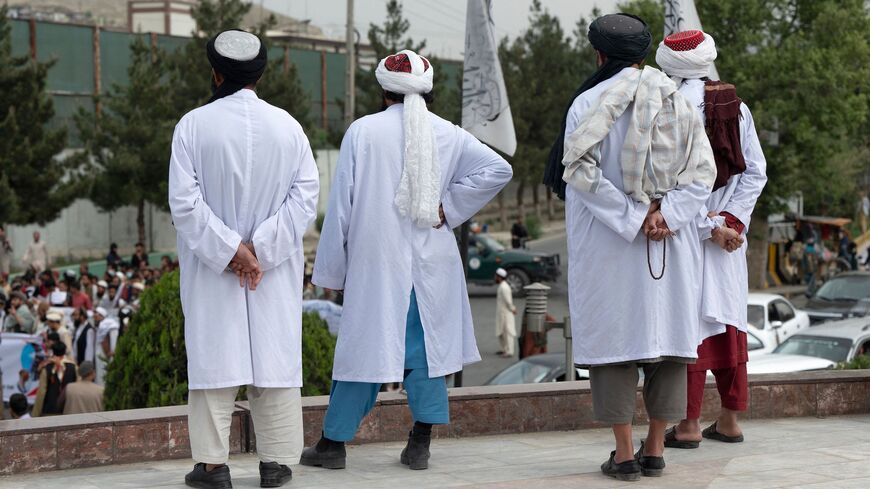 Taliban members of the Ministry for the Propagation of Virtue and the Prevention of Vice keep watch during a demonstration against videos allegedly showing Afghan refugees being beaten by Iranians that went viral, near the Ahmad Shah Massoud square in Kabul on April 12, 2022. - WAKIL KOHSAR/AFP via Getty Images

Iran has confirmed allowing Taliban diplomats at Afghanistan's Embassy in Tehran, insisting, however, that the decision is not meant to pave the way for official recognition of the Taliban as a government.

"We will not hand over the embassy to a government that we have not recognized," said Foreign Ministry spokesman Saeed Khatibzadeh at a Tehran presser April 26.

Khatibzadeh noted that there is no ban on the entry of Taliban diplomats nor any plan to close the Afghan Embassy. He cited a backlog of consular cases at the Afghan mission and its need to boost staff amid an incessant influx of refugees crossing into Iran via the porous eastern border.

"Recognition [of the Taliban] is a different path," he added in an apparent attempt to clarify possible confusion arising from the Iranian approach. "The ruling body in Afghanistan will win recognition if showing responsible action."

In an earlier briefing April 18, Khatibzadeh had set recognition as a prerequisite for the Taliban to be able to station new representatives in Iran.

The Islamic Republic has not specifically determined conditions for Taliban recognition but has called for the formation of a government in Kabul inclusive of all ethnic, religious and political groups in the war-ravaged nation.

In the period of less than a year since the Taliban takeover of Afghanistan, relations between Tehran and the extremist group have largely remained peaceful yet have faced occasional bumps as well, from shared water resource complications to border clashes.

As recent as last weekend, Iran closed, albeit briefly, a key crossing due to what it described as the Taliban's failure to coordinate a road construction project with officials in Tehran.

Addressing the border tensions during the Tuesday presser, Khatibzadeh expressed "serious concern," saying Iranian border guards have so far treated their Afghan counterparts with "restraint." He suggested that the Taliban should avoid construing the Iranian approach as weakness.

The Iranian spokesman blamed the tensions on the "possible poor skill" of new Afghan guards posted to the border by the Taliban.

"Our zealous guards are duty-bound to regulate and block any illegal border movements. We, in the meantime, would be happy to offer the essential training to Afghan guards on how to distinguish the border points."