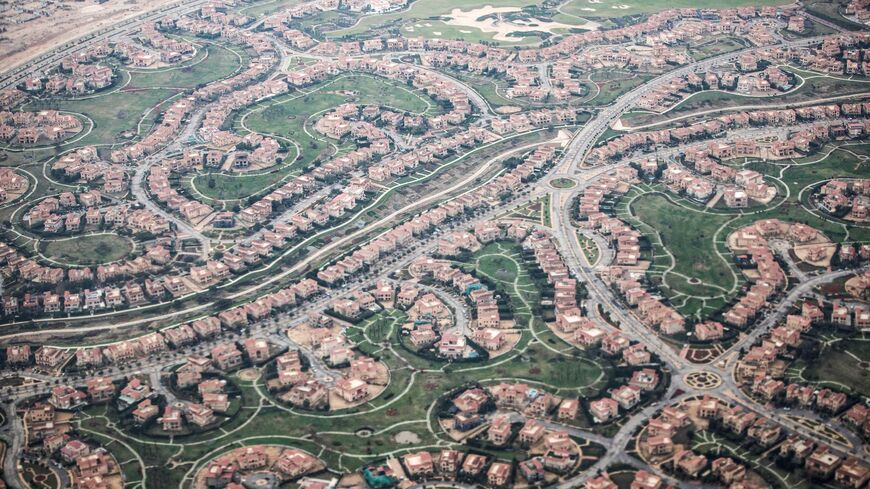 This picture taken on March 13, 2020, shows an aerial view of low-rise luxury housing in the residential suburb of Madinaty, some 40 kilometers east of the center of Egypt's capital, Cairo. - KHALED DESOUKI/AFP via Getty Images

Egypt’s property developers have suspended sales as the market feels the pinch of a stronger dollar and the higher cost of building materials. The local real estate market is going through what analysts describe as repricing, citing high world prices of energy, freight and global economic uncertainty.

Against a backdrop of growing inflation rates, prices of residential units have been increasing since the central bank devalued the pound and raised interest rates by 100 basis points on March 21.

“Developers have increased prices between 15% and 25% on their new launches. In terms of the market dynamics, we have seen buyers rushing to buy real estate in the medium term, and this is due to the fact that they would like to hedge against the drop in value of the local currency against the US dollar,” Ayman Sami, country head of real estate and investment management firm JLL Egypt, told Al-Monitor.

According to him, the devaluation had many implications on the real estate market with the primary challenge being managing costs.

“The devaluation coupled with the high rate of inflation has pushed up the construction costs, which meant for the developers that their profitability has been highly impacted. In terms of the market dynamics, we have seen buyers rushing to buy real estate, and this is due to the fact that they would like to hedge against the drop in value of the local currency against the dollar,” Sami explained.

However, there are potential benefits for the tourism sector and hotels, as this would make Egypt a more attractive destination, Sami argued, citing the nonresidential components.

“When it comes to retail, consumers are expected to focus on the basics in the medium term. Office occupiers are back in search mode and looking to secure more office space, with a greater focus on health and well-being,” he said.

Answering a question about the elasticity of demand for properties in Egypt, Sami stressed that affordability is one the biggest factors here and developers are very much aware of this, hence price increase per square meter is sometimes coupled with a reduction in unit size and extended payment plans to adapt to the market needs.

“We cannot deny that the fundamentals of Egypt are very strong, with the sheer size of the population growth playing a major role in the demand for real estate. One thing is for sure: the Egyptians see real value in owning property as a true hedge against inflation and devaluation. So if there is word about potential price increases, this triggers a short- to medium-term rush in demand for real estate,” Sami said.

However, higher costs of building materials should not lift the prices of properties by more than 10% in Egypt, Medhat Stefanos, head of the cement division at the Federation of Egyptian Industries (FEI), told Al-Monitor.

Stefanos explained that any increase in prices or costs will be eventually reflected in the final prices of products, citing higher costs of imported production inputs in the wake of the Russia-Ukraine crisis. However, according to him, the supply/demand mechanism applies differently in properties.

“While repricing of properties is inevitable, building materials account for roughly 10.5% of the finished unit,” he said.

The price of steel rebar has shot up by 5,000 pounds (around $270) since the beginning of 2022, reaching as high as 20,000 per ton. However, the fair price of steel rebar should not exceed 17,000 pounds per ton, Ahmed el-Zeiny, head of the building materials division of the Federation of Egyptian Chambers of Commerce (FEDCOC), told the local press on April 14.

With zero-cost financing, Stefanos explained that real estate developers sell their projects even before starting construction through installment plans. “The funding cost is zero, where the developers get the funding from the buyers, who pay the installments on time. Now let’s take a look at what happened after the pound devaluation; the price of land for developers is the same. The margin profits are also the same,” he said.

Stefanos, who is also a civil engineer, argued that higher prices of steel rebar and cement wouldn’t raise the prices of properties by more than 10%.

“Stagflation applies to the real estate market, where prices of housing units shoot up while sales decrease. That’s what makes the property market an exception in this country,” he said.

“The [state-run] New Urban Communities Authority (NUCA) has been feeding the supply side, especially for the low-income people. The government’s social role in housing has been essential for creating a surplus in residential units in new cities,” Stefanos said.

NUCA, which is affiliated with the Ministry of Housing, built 55,488 housing units for low-income brackets in 2021 despite the higher cost of steel rebar, which surged by 46% in 2021 compared to a year earlier, according to the abovementioned JLL report.

Stefanos called for a usufruct system — the right to use the land for a fixed period of years — so that developers would not own the land. “A usufruct system would combat speculation on properties. Unfortunately, the so-called developers in Egypt are nothing but land speculators. They get the land at cheap prices for profiteering later,” he said.

“The usufruct system may churn out more revenues than taxes for the state,” he added.

Commenting on the cost/price equation of properties, Sami admitted that the inflation on material costs should not have the same effect on the selling prices.

“However, the challenges are more than just the immediate impact of cost challenges. We are also facing shortages in the material due to supply chain constraints and also the fact that delivery of the units are usually in the future. Hence, it is anticipated that further waves of inflation will impact the cost in addition to the extended payment plans, which adds to the impact of the cost of the units,” Sami argued.