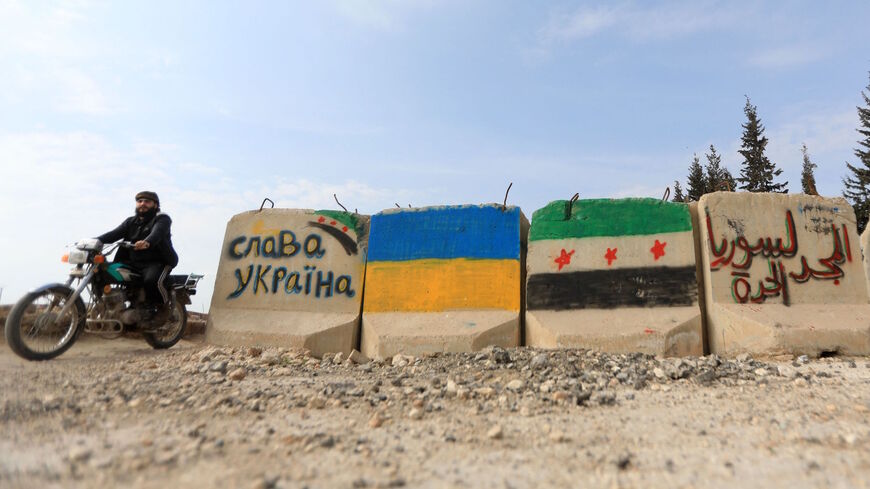 A man rides a motorcycle past cement blocks bearing flags of Ukraine (C L) and the Syrian opposition with inscriptions, one in Cyrillic (L) that reads "Slava Ukraini" ("Glory to Ukraine"), a Ukrainian national salute, and another in Arabic that reads "Glory to free Syria," near the Syrian rebel-held city of al-Bab in the northern Aleppo governorate, on Feb. 28, 2022. - BAKR ALKASEM/AFP via Getty Images

For Raed al-Saleh, the chief of the White Helmets rescue organization in Syria, the images of buildings reduced to rubble in Ukraine look depressingly familiar. Russian warplanes have bombed opposition-held parts of his country since 2015, turning the tide of the decadelong battle in President Bashar al-Assad’s favor through an unrelenting air campaign that's destroyed schools, hospitals and other civilian infrastructure in the name of attacking terrorists.

“For seven years, we have been suffering from what the search-and-rescue teams are suffering from in Ukraine today,” Saleh told Al-Monitor by phone on Monday.

When Russian and government planes hit densely populated areas, the White Helmet rescuers, a Syrian volunteer force, were often the first on the scene to pull bodies from beneath the smoldering ruins.

As first-hand witnesses to the horrors of Syria’s war, the White Helmets have provided testimony and photographic evidence of potential war crimes, including an April 2017 chemical weapons attack in the town of Khan Sheikhoun that UN investigators attributed to Syrian government forces.

“My suggestion for the search-and-rescue teams in Ukraine is to have cameras mounted on their helmets,” said Saleh, a former electronics dealer. GoPro cameras, he added, can provide the “most significant proof” for rescuers seeking to document Russian violations in real time.

Already, Russia has drawn accusations of war crimes for its heavy shelling of Ukrainian schools, hospitals and residential buildings. On Monday, the International Criminal Court said it would open an investigation into Russia’s alleged abuses in Ukraine.

At least 136 civilians, including 13 children, were killed in the first five days of fighting, according to the UN's human rights office, which cautioned the actual death toll is likely much higher.

The Russian military denies targeting civilians, as it has done repeatedly in Syria.

But growing evidence suggests Russian forces in Ukraine may be using indiscriminate bombardments similar to those unleashed in Syria. In Ukraine’s second-largest city of Kharkiv, Amnesty International has recorded the use of cluster munitions, a highly imprecise weapon banned by most countries for its ability to spread explosives, known as submunitions, over a large area.

As Russia intensifies its assault, Saleh cautions rescue workers against gathering in one place, recommending they instead move in smaller groups of four to five people so as “not be easy targets for the Russian air force.”

He advised Ukraine’s rescue workers to stick to short-range walkie-talkies for communication and avoid using the internet on devices that could be hacked to track their movements.

Saleh also warned of the potential for so-called double-tap strikes, where aircraft bomb a target before circling back minutes later to drop a second bomb deliberately on the first responders who rushed to the scene. In 2020, UN-appointed investigators described a suspected Russian follow-up attack on a crowded Syrian marketplace as a war crime.

The international community “turned a blind eye to what Russia was doing” in Syria, he said. “This is why Russia dared to do the same in Ukraine. It knew it was not going to be held accountable.”