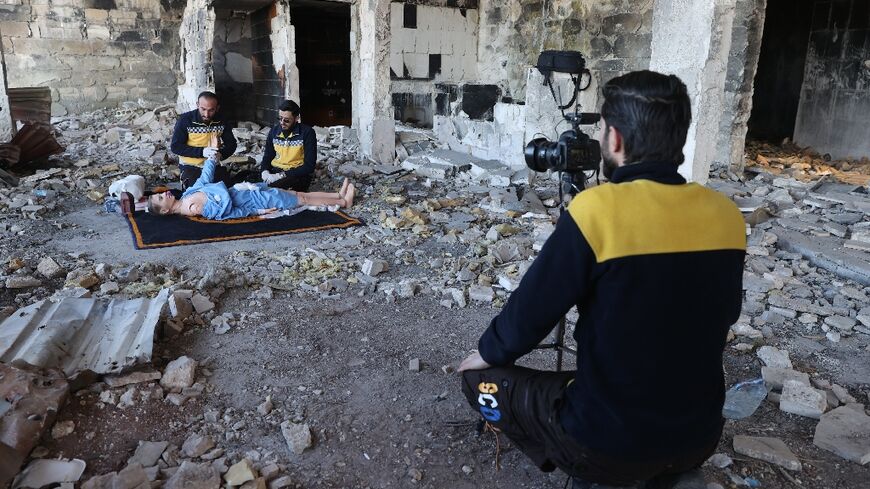 Members of the Syrian civil defence known as the White Helmets use a dummy to demonstrate their rescue skills during a video shoot for an instructive film intended for Ukrainian rescuers, in the war-ravaged Syrian town of Ariha - Omar HAJ KADOUR
Agence France-Presse
April 10, 2022 — Ariha (Syria) (AFP)

In a bombed-out building in northwest Syria, rescue workers who for years have braved Russia's war strategies film a tutorial video for Ukrainian volunteers crammed with tips gained from first-hand experience of treating casualties.

Using a dummy, members of Syria's "White Helmets" civil defence force demonstrate how to apply bandages and tourniquets in a clip shot in the rebel-held town of Ariha in Idlib province where Russian airstrikes are relatively routine.

The video which offers a range of other rescue initiatives is the latest example of how Syrians are mobilising to share with Ukrainians bitter knowledge gleaned from more than a decade of war involving Russian forces.

"As first responders, we believe that we can share our experiences in Syria with humanitarian aid workers in Ukraine," volunteer rescuer Ismail al-Abdullah tells the camera in English, battered buildings dotting the street behind him.

Abdullah said that the alleged targeting of schools, hospitals and humanitarian workers by Russia in Ukraine is "sadly too familiar to us", after years of similar horrors.

In the video, Abdullah warns Ukrainian rescuers against "double strikes" in which an initial raid is followed by a second attack that hits after rescuers have gathered at the scene.

Speaking to AFP, Abdullah said the aim of the initiative is to produce tutorials that will be translated into Ukranian and uploaded on the White Helmets' website. 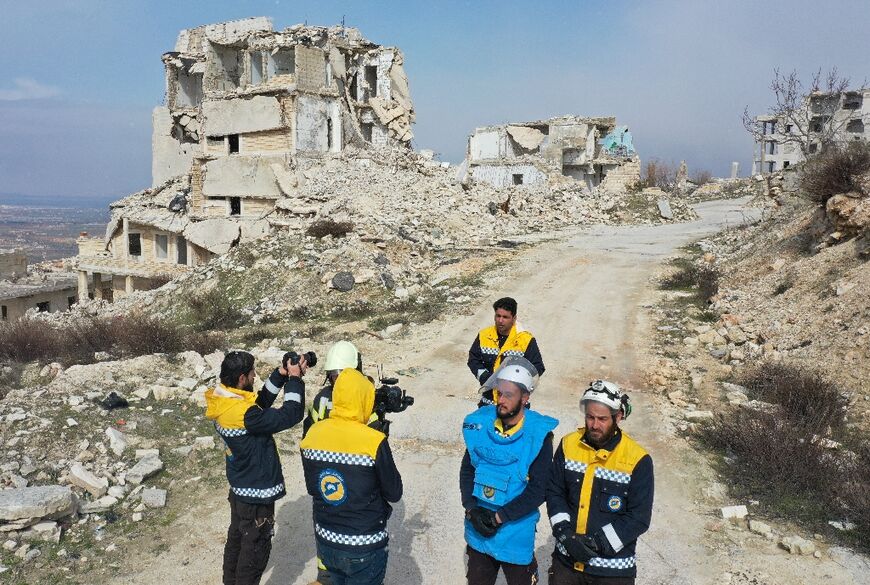 The content is intended to help rescuers and civilians in Ukraine deal with Russia's bombardment strategy which it developed during Syria's war.

"We are offering this advice so that Ukranian rescuers avoid...casualties," whether among civilians or first responders during rescue missions, he said.

Russia entered Syria's civil war in 2015 on the side of President Bashar al-Assad's regime, allowing Damascus to clock up turnaround victories in the decade-long conflict.

From besieging cities to shelling civilian infrastructure and arranging so-called "humanitarian corridors", the strategies Moscow has fine-tuned in Syria are now being deployed in Ukraine.

Abdullah advised Ukraine's rescue workers to document their work using GoPro cameras "to safeguard credibility" and shield themselves from smear campaigns that have previously been used to undermine Syria's first responders.

Syrian medical student Mohamed Haj Musa, who also appears in the tutorial video, said he hopes the advice will help Ukraine's people "deal with injuries they could see at any moment".

"We lived the experience and saw the victims," Haj Musa told AFP, hoping that his experience could help other first responders "save lives".