Despite official assurances over supplies of basic items, a holdup of imports from Russia and Ukraine has already sparked panic buying of sunflower oil. 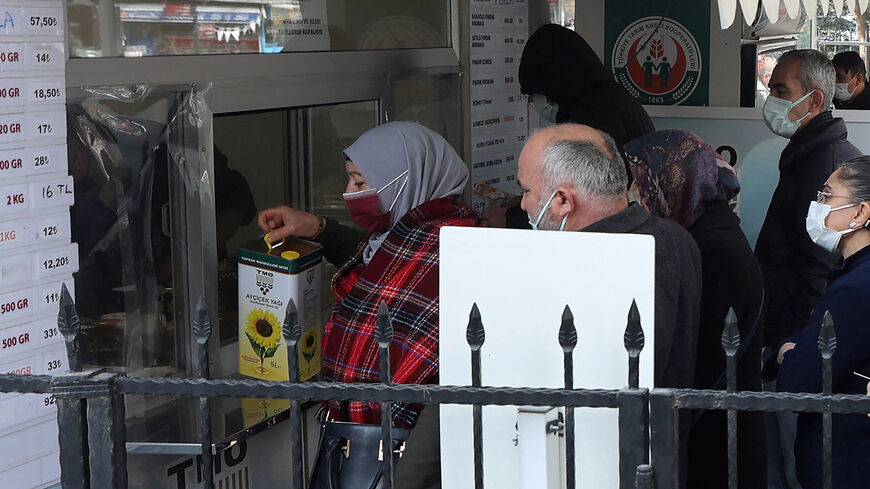 ISTANBUL — The war in Ukraine has sparked panic buying of sunflower oil in Turkey and police investigations into dozens of “provocative” tweets about rising prices.

In an early sign of the economic impact of the war for Turks, over the weekend shoppers scooped up supplies of the essential cooking ingredient.

Turkey imports large quantities of sunflower oil from Russia and Ukraine. A warning from the Vegetable Oil Manufacturers Association that stocks could run out next month sparked a rush on supermarket shelves.

Tahir Buyukhelvacigil said ships carrying vegetable oil from Russia and Ukraine, which provide 55% and 15% of Turkey’s import needs, respectively, were being held up in the Sea of Azov and unable to pass into the Black Sea due to the conflict.

Problems of payment to Russia and the possibility of the war affecting this year’s harvest in Ukraine have added to concerns about vegetable oil supplies.

Sunflower oil was Turkey’s third largest food import last year, according to the Federation of Turkish Food Associations. Wheat, which is also largely brought in from Russia and Ukraine, was the main import.

According to news reports, 5-liter containers of sunflower oil quickly sold out amid claims of prices rising by up to 25% in a day. Officials were sent to check prices in supermarkets across the country.

The war comes as Turkey is experiencing its worst economic crisis in 20 years. According to Monday, Istanbul Economic Research’s Turkey Report, 60% of survey respondents said their income did not cover their expenses in February as they faced rising food and energy prices.

The official rate of inflation currently stands at 54.4%, although independent economists put the figure at 123.8%. Turks were expecting further hikes in the price of gasoline and diesel on Monday evening, commodities that have already risen by more than 50% since the start of the year.

“There’s a situation in Turkey that, while the panic yesterday was uncalled for and unjustified, shows how agitated people are by prices,” said Can Selcuki, general manager of Istanbul Economic Research. “Even the smallest rumor on Twitter can get out of hand and start panic buying.”

Recently appointed Agriculture Minister Vahit Kirisci issued a statement Sunday denying cooking oil shortages. “All necessary planning has been made until the first harvest,” he said. “Considering our production, the supply of the sector and our turnover stocks, our country has sufficient sunflower oil stocks. … There is no situation for our people to worry about.”

Meanwhile, police announced investigations into 45 Twitter accounts for sharing “disinformation” about sunflower oil. Interior Minister Suleyman Soylu said the government would “do what is necessary to those who provoke this nation” and blamed “manipulations” for the scare over food supplies.

One ruling party lawmaker called for anyone found to be stockpiling essential products to be tried for treason.

Many argued that Turkey, the world’s largest sunflower oil importer, had left itself vulnerable to external factors through its reliance on agricultural imports.

“Making the country dependent on imported agricultural goods in the midst of the food crisis means leaving the people to starve,” said Guven Gurkan Oztan, associate professor of political science at Istanbul University.

“As a matter of fact, the war between Russia and Ukraine has once again shown how foreign dependency creates terrible humanitarian consequences. Proud of being a granary in its time, Turkey is dependent on two warring countries for wheat and sunflower oil supplies.

“The people who were already condemned to cheap bread queues before the war are now watching the new price hikes in bread with horror.”

Like other countries, Turkey will be hit by the indirect costs of the war, such as rising oil prices. However, the depreciating Turkish lira, which lost 44% of its value against the dollar last year, and its trade ties to Ukraine and Russia make it particularly vulnerable.

Turkey was counting on large numbers of tourists from both countries to provide a much-needed injection of foreign currency this summer.

“We don’t yet know how long the military side of the conflict will go on for,” said Selcuki. “If it’s prolonged it will have some dramatic impacts on Turkey. But if it ends soon, then Turkey might be able to mitigate these risks.”

The conflict, however, is likely to heap further difficulties on most Turks. “Even without the war, inflation is over 50% and Turkish people are going to get poorer because their purchasing power is going to decline,” Selcuki added.