The stabbing attacks that killed four in the south of Israel is forcing the government to shift focus away from Ukraine and back to the domestic front. 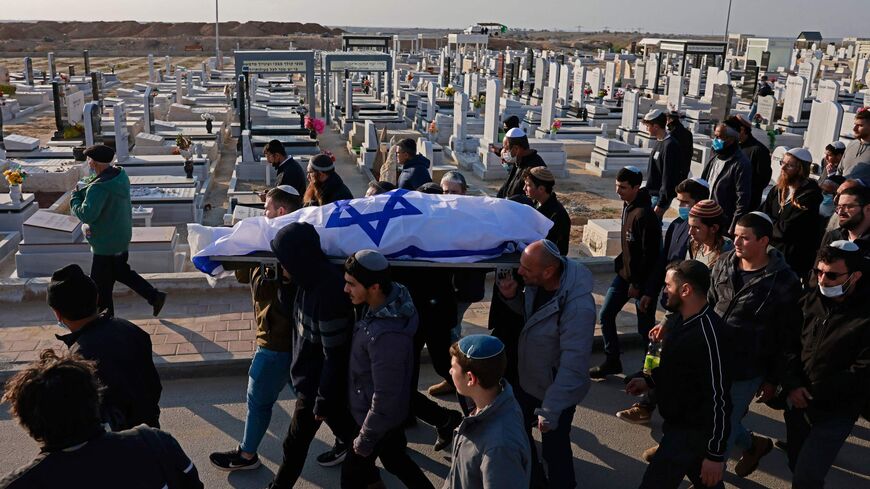 Mourners carry the body of 67-year-old Menahem Yehezkel, who was stabbed to death the previous day, during his funeral in the southern Israeli city of Beersheba on March 23, 2022. - MENAHEM KAHANA/AFP via Getty Images

The murderous rampage in one of Israel’s major cities March 22 not only left four Israelis dead in just eight minutes, but also delivered a devastating blow to the ruling coalition. It was the worst terrorist attack in Israel in years, made even worse by the perpetrator being an Israeli citizen, a Bedouin from the village of Hura. He was reportedly also a supporter of the Islamic State who had spent time in Israeli prison for security offenses.

The incident happened while an Arab party is part of the governing coalition for the first time in Israel’s history. Members of Ra'am hold important positions in Knesset committees and the party has obtained unprecedented funding on behalf of the Arab sector.

Terrorist attacks and security issues in general have been the vulnerable underbelly of every Israeli government, but especially those on the left. The second intifada, which broke out in 2000, led to the fall of Prime Minister Ehud Barak while he was in the middle of a historic diplomatic process with the Palestinians. Just a few years earlier, in 1996, the government of Prime Minister Shimon Peres fell as a result of several horrific terrorist attacks in Israel. They occurred while Peres was trying to fulfill the Oslo Accords and save the legacy of his predecessor Yitzhak Rabin, who was assassinated just a few months earlier.

If more such attacks occur, the political challenges facing this government will be just as harsh. People will connect the attacks with the Islamist Arab party that is an integral part of the coalition. Ra’am chair Mansour Abbas was quick to denounce the attack in the strongest terms. He clearly knows that this worst possible scenario has the potential to destroy a very delicate political coexistence.

Prime Minister Naftali Bennett was informed about all the details just after arriving home from a historic summit with Egyptian President Abdel Fattah Al-Sisi and Crown Prince Mohamed Bin Zayed of the United Arab Emirates. The three leaders were coordinating their countries’ response to a nuclear agreement with Iran.

Bennett and his staff were preparing to market these achievements to the media. The young prime minister was filling the shoes of his predecessor by juggling major crises in the Middle East and Europe, where he was emerging as a mediator in the Ukraine war.

Instead of celebrating his diplomatic achievements, Bennett was forced to react to the latest terrorist attack at home. He said, “I send my deepest condolences to the families of the victims of the terrible attack in Beersheba, and I pray for the well-being of the wounded. … The citizens who shot the terrorist showed resourcefulness and courage and ensured that there were no more victims. The security forces are on maximum alert. We will respond with a heavy hand to the perpetrators of terrorism. And we will pursue and capture anyone who helps them, too.”

Meanwhile, opposition leader Benjamin Netanyahu pounced on the opportunity to attack both the coalition and the Israeli public at large. “I share in the pain of the victims’ families and pray for the welfare of the injured. Bennett and Lapid must ignore any political considerations. They must capture the terrorists immediately and restore security to the people of Beersheba and the south.” Netanyahu was implying that Bennett and Lapid are unable to respond with force against the perpetrators, who are Israeli citizens, because they are afraid that Abbas will take down the coalition.

Netanyahu wasn’t the only person to accuse the government of being unable to govern. Virtually all the members of the opposition from the right cited the terrorist attack as proof that the government's inclusion of an Arab party was leading to the deterioration of Israel’s security. Miri Regev of the Likud called it “a murderous attack that proves the weakness of this government and the its loss of control in the Negev.”

Thousands of outraged Israelis attended the funerals of the four victims the next day. They had seen the horrific videos of the rampage that went viral. Ministers at the funeral were accused of sitting in a government with terrorists. Education Minister Yifat Shasha Biton, who attended the funeral of 67-year-old Menachem Yehezkel of Beersheba, needed to be spirited away by the police after participants started shouting at her, “His blood is on your hands," and "You sit with terrorists.” When the chief of police arrived at the scene, he was also attacked by local residents, who accused him of failing to ensure their personal safety.

This mood, with increasing tensions attributed to the Ramadan season, does not bode well for the government. Knesset members and ministers from the right flanks of the coalition are facing an ideological moment of truth.

There were five stabbings in Israel and the West Bank over the last month. First, on March 2, there were two stabbings in the village of Hizmeh, near Ramallah. In both cases, the victims were Israelis who had entered the West Bank village and suffered moderate injuries. A young man from the Shuafat refugee camp was arrested on suspicion of being behind both attacks. On March 6, a police officer was stabbed by a Palestinian in the Old City and suffered minor injuries. The assailant was shot and killed by the police. On March 7, two police officers were injured in a stabbing attack in Jerusalem’s Old City and again the assailant was shot dead. Then, on March 19, a 28-year-old Palestinian from the Abu Tor neighborhood stabbed a 35-year-old Israeli on Derech Hevron Boulevard in Jerusalem. The victim suffered minor injuries and the assailant was shot.

If it continues, this trend will mean a security challenge for the coalition. While the Iran issue looms in the distance, terrorist attacks in the heart of Israel perpetrated by Arab citizens have an immediate impact on the public opinion and bolster support for the right.

All this has long-term implications on the government’s ability to move ahead with the peace process with the Palestinians, which Foreign Minister Yair Lapid is waiting to push forward once he takes over as prime minister. Another issue is the involvement of the Israeli prime minister as a mediator in international disputes and why he isn't putting with the personal security of Israeli citizens first.

If the violence proves to be part of a significant new wave of terrorism, the government will be required to provide answers and prove it can restore governability to the Negev as promised. If it can't, Netanyahu and the right will get stronger and it will become even harder to renew the peace process.