Russian invasion of Ukraine has sharp impact on Iraq's economy

Russia's invasion of Ukraine has caused shortages of food in Iraq and forced the government to pay more in gasoline subsidies, but the high price of crude oil plus sanctions on Russia has opened new opportunities for Iraq. 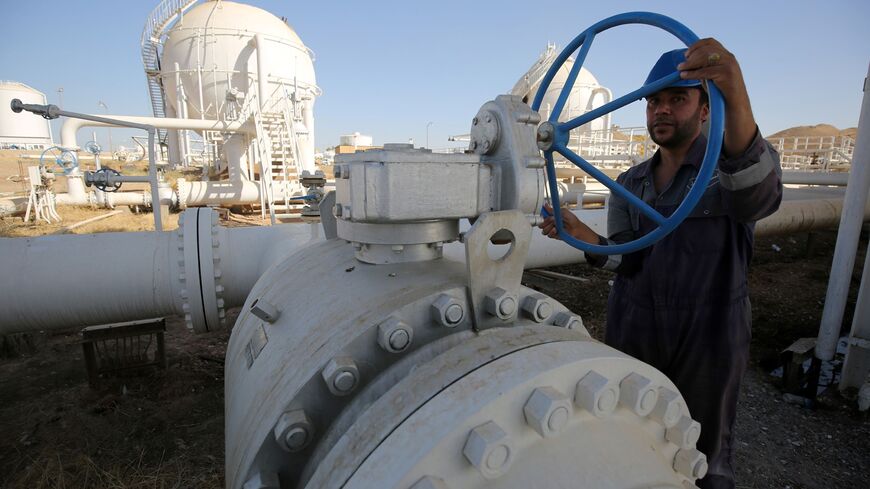 An Iraqi oil employee turns a valve as he checks pipelines at the Bai Hassan oil field, west of the multi-ethnic northern Iraqi city of Kirkuk, on Oct. 19, 2017. - AHMAD AL-RUBAYE/AFP via Getty Images

Like many other countries, Iraq was affected by Russia’s invasion of Ukraine due to its dependence on the warring countries' agricultural products. Iraq participated in a four-way summit last week in Aqaba, Jordan, to discuss food security challenges and alternatives.

In the meantime, Iraq's oil market is booming after several oil-importing countries cut off Russian supplies.

Iraq received oil purchase requests from European countries on March 3 in the wake of the European and US sanctions on the Russian economy. This enables Iraq to enhance its presence in the European market, which it began losing to Russia years ago.

Russian investments in Iraq are estimated at more than $10 billion, mostly in the oil sector. Several Russian companies operate in southern Iraq and the Kurdistan region in fields with a reserve of 17 billion barrels and currently produce more than 500,000 barrels per day. Chief among these companies is Lukoil in the West Qurna-2 field and Gazbom in the Badra and Rosneft fields in Kurdistan.

Spokesman for the Oil Ministry Assem Jihad told Al-Monitor, “In the wake of the Russian-Ukrainian crisis, Iraq received requests to buy oil from European, Asian and US countries.” The State Organization for the Marketing of Oil (SOMO) discusses such requests, Jihad said, but “Iraqi oil is only sold to refineries and cannot be speculated in the market.”

SOMO Deputy Head Ali Nizar said that Russian oil is similar quality to Iraqi oil, and some countries’ refusal to buy it due to sanctions will increase the demand for Iraqi oil in European and East Asian countries. Thus, Iraq is getting more money for its oil, which benefits the country's financial position.

Oil provides 89% of Iraq’s budget, and rising prices have allowed the government to repay foreign debt and to resume projects stalled during the past years due to the financial crisis that hit the country in 2020 as a result of the decline in oil prices.

The Russian-Ukrainian crisis may lead Iraq to lose the Indian and Chinese markets, which buy Russian oil at $30 less than Brent crude, especially considering that Iraq exports most of its oil to China and India. Iraq is now facing some problems in the West Qurna 2 field, which is operated by the Russian Lukoil Company.

Iraq's export capacity is at its highest now, he said, and increasing it by 300,000 barrels per day would require very large investments that take more than six months.

On the home front, Iraq is experiencing a gasoline crisis due to the lack of sufficient refineries operating in the country. Director of the Oil Products Distribution Company Hussein Talib said, “When oil prices were below $55, we used to import a barrel of gasoline at $50, but now this barrel costs $110, and we are still selling it at the same subsidized prices, which amount to 31 cents a liter.”

Iraq imports 16 million liters of gasoline per day, he said, and “the government spends about $4 million per day to subsidize gasoline prices, and the rise in oil prices increases this amount.”

However, Ihsan al-Attar, a Ministry of Oil official who is on the committee that regulates oil licensing, told Al-Monitor that two types of Russian oil companies operate in Iraq. Companies that are the primary investors in oil fields receive their revenues in oil and sell it to international refineries. But the secondary oil companies, he said, "will face a problem because they receive their money in dollars.”

He added that Russian companies operating in Iraq will face problems in providing equipment and technology that Iraq needs in its oil fields due to international sanctions against Russia.

The Central Bank of Iraq called on state institutions not to deal with Russian companies or transfer money to Russia in order to protect the Iraqi financial system against international sanctions, and the Iraqi Trade Bank is entitled to suspend correspondence with Russian banks.

Economist Omar al-Rubaie told Al-Monitor, “Iraq can expand its presence in the European market and stand in the way of Saudi Arabia or any other country getting the chance to have a share in Europe.” Sanctions against Russia will last for years, he said, so Iraq can invest up to $10 billion in the oil sector and increase its production to 8 million barrels per day under current oil prices.

The Russian-Ukrainian crisis has also nearly doubled Iraqi food prices, since the country depends almost entirely on imports. The government has subsidized basic materials such as wheat and oil, with the aim of reducing prices in the local market.

Al-Rubaie, however, noted that  trading partners such as Iran and Turkey are suffering today from high inflation, which has created greater demand for domestically produced Iraqi foodstuffs at a lower price.

Having said that, if the war continues, the food security of Iraq will remain threatened, because the country cannot grow enough wheat, corn, barley and rice, due to the water crisis after Iran and Turkey cut off water, increased desertification and decreased the proportion of arable land.