Putin says Moscow ready to use Mideast fighters in Ukraine

Russian President Vladimir Putin has backed the idea of sending volunteer fighters to Ukraine, though there are good reasons for Moscow to refrain from bringing them in from Syria and elsewhere. 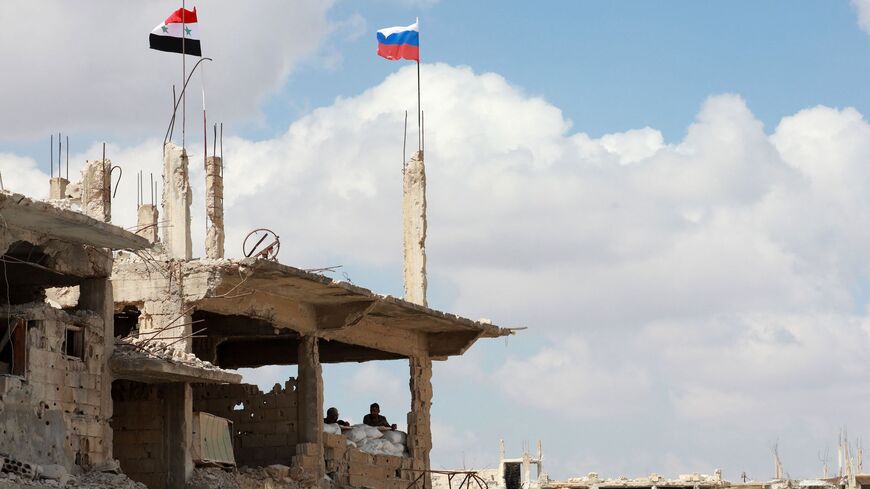 A picture taken during a tour organized by the Syrian Ministry of Information shows a Syrian and a Russian flag flying above a damaged building in the district of Daraa al-Balad of Syria's southern city of Daraa, on Sept. 12, 2021. - LOUAI BESHARA/AFP via Getty Images

As the Russian invasion of Ukraine enters its third week, there has been increasing talk about the participation of mercenaries and volunteer fighters coming from Syria and other Muslim-majority states to fight on both sides of the conflict.

On Friday, Russian President Vladimir Putin backed the idea of sending volunteer fighters to Ukraine. Speaking to Defense Minister Sergei Shoigu during a televised security council meeting, he said, “If you see that there are people who want on a voluntary basis, especially not for money, to come and help [separatists in east Ukraine], well then you need to meet them halfway and help them move to the combat zones.”

Putin’s comments came in response to Shoigu’s statement that more than 16,000 volunteers from the Middle East had applied to be sent to eastern Ukraine to fight on Moscow’s side.

Anton Mardasov, a nonresident scholar in the Middle East Institute's Syria Program, told Al-Monitor that Putin and Shoigu’s statements at the security council meeting “were mostly political in nature.”

“It was not without reason that the figure of 16,000 volunteers from the Middle East — who had sent some kind of application through some strange channels of communication — was voiced, because that was the number of volunteers [Ukrainian President Volodymyr] Zelenskyy spoke about on March 3.” Thus, Mardasov noted, this is a “clear counter-argument of the Kremlin,” but it remains to be seen if anything will actually materialize.

Mardasov noted three reasons Moscow may refrain from bringing Syrians to fight in Ukraine. “First, the process of transferring fighters from the Middle East to Ukraine … will demonstrate Moscow's inability to solve military tasks with the existing mixed grouping of Russian troops. The Kremlin is trying diligently to broadcast to a domestic audience that combat operations are limited and that there are no plans to mobilize reservists.”

Second, the Russian forces would face combat coordination and communication issues. “Russia has experience using Syrians in the Libyan war, but this is more difficult in Ukraine, even if such units are assigned interpreters and begin operating in the warmer springtime,” he added.

And “third, to patrol territories already taken under control and suppress protests inside cities, Russia is trying to involve native Donbas residents [under the premise that] ‘the Ukrainian understands the Ukrainian.’”

Mardasov noted that while Syrian or Hezbollah detachments could be assigned to play a role of force support at the front “so that the Ukrainians could not strike at the rear of Russian troops when trying to encircle Ukrainian troops in cities,” their use “is likely to be limited.”

On March 4, Al-Monitor reported on increasing evidence that the Syrian government and its Russian military partners are recruiting Syrian fighters to assist Moscow in the conflict in Ukraine. Two days later, on March 6, The Wall Street Journal reported that the Pentagon was aware of such efforts and, according to a US assessment, Russia is hoping Syrian fighters’ “expertise in urban combat can help take Kyiv and deal a devastating blow to the Ukraine government.”

Yet some are skeptical that this will happen. Russian security analyst Yuri Lyamin told Al-Monitor he sees no reason to involve Syrians in the fighting in Ukraine on the Russian side. “On the Russian side, very large forces of regular troops are now participating in the military operation, so I see no reason to involve [private military companies] or Syrians who are completely unfamiliar with this theater of operations.”

At the same time, there have been reports that Syrian opposition fighters and militants of jihadist groups operating in Syria are prepared to go to Ukraine to confront Russia. Such a development is not impossible, given the high anti-Russia and pro-Ukraine sentiment among the Syrian opposition as well as Zelenskyy’s decree waiving visa requirements for foreigners coming to fight Russia. Yet there is no evidence so far of any Syrian fighters actually making their way to Ukraine.

Taha Alabduvakhed, a Syrian journalist and post-Soviet expert based in Russia, told Al-Monitor that many Syrians would be ready to take part in the war in Ukraine given the dire economic situation in Syria itself. Many Syrians are looking for any opportunity to leave the country, he said, even if they have to fight under another flag. This applies to both those Syrians who support President Bashar al-Assad and those who support the opposition.

This economic reality means “they could end up in the ranks of the warring parties in Ukraine,” he emphasized.

According to Lyamin, despite Zelenskyy’s call for fighters from across the world to fight in Ukraine, “I don’t think there will be many of them.”

The arrival of volunteers from the Middle East and Muslim-majority countries to Ukraine could also play into the hands of the Russian special services. The latter, alongside claims about the threat of fascism coming from Ukraine, have also already created a basis for accusing the Ukrainian leadership of deploying radical Islamists in the country. The head of Russian intelligence, Sergei Naryshkin, made a statement on this matter back in early February.

“There is even information about the appearance [in Ukraine] of multinational groups of jihadist militants,” Naryshkin said at the time.

It should also be taken into account that unlike Croatian and other European volunteers, the public attitude in Ukraine toward fighters from Muslim countries is divided. The Russian military operation has already seen anti-Islamic sentiments spread among some of the Ukrainian military personnel.

Among the Russian units operating in Ukraine, there is a notable presence of representatives of the Muslim peoples of Russia, and some formations are entirely composed of Muslims who openly declare their religion.

This applies, for example, to the detachments of the Russian National Guard from Chechnya, which are led by the head of this Russian republic, Ramzan Kadyrov. Chechen soldiers do not shave their beards, read collective prayers and use Islamic religious rhetoric. These detachments are among the most combat-ready and trained of the Russian forces deployed in Ukraine and provoke the greatest hostility on the part of the personnel of the Ukrainian armed forces. Sometimes this anti-Chechen sentiment leads to wider anti-Muslim sentiment.

The Turkish pro-government newspaper Yeni Şafak has already drawn attention to the issue, describing the Ukrainian Azov battalion as an “aggressive neo-Nazi group" after the appearance of a video of the Ukrainian soldiers of the battalion smearing the cartridges they were going to use against Kadyrov's forces with pig fat.

Syrians for Truth and Justice, an independent nonprofit research organization monitoring the Syrian conflict, noted in a recent report that Turkey has refused to get involved in any effort to deploy Syrian mercenaries to Ukraine.

On the other hand, unlike the Arab Syrian volunteers, the appearance in Ukraine of separate units consisting of Chechen oppositionists — Kadyrov's opponents — has already become a reality. These formations were created back in 2014, during the war in Donbas, and have likely now been restored.

At least the commanders of two battalions, consisting of Chechen volunteers, have declared that they are participating in the defense of Ukraine. One battalion of volunteers is named after Chechen secularist leader Dzhokhar Dudayev, led by Adam Osmaev, and the other is named after Sheikh Mansur, led by Muslim Cheberloevsky.

In this regard, the appearance of Chechen fighters from Syria in Ukraine cannot be ruled out. Two Chechen groups — Junud Al-Sham and Ajnad Al-Caucasus, which oppose the Assad regime and were based in Idlib —  came into conflict with Hayat Tahrir al-Sham in the summer of 2021 and were disbanded by the HTS alliance that controls the region. Individual fighters from these Chechen groups could try to travel to participate in the Ukrainian conflict.

Mardasov said it’s possible there could be “a scenario of limited participation of a number of small detachments, including Chechen ones, in the war against Russia on their own initiative, especially since the Chechens in the Syrian conflict occupied a special position and are able to make independent decisions.” However, he noted that combat coordination for different groups of fighters plays a big role — “In any case, this takes time.”

Denis Kolchin, a Russian journalist and researcher of jihadism in the Caucasus, told Al-Monitor that on the contrary, he is skeptical that Chechen fighters from Syria will participate in the conflict in Ukraine, but those already living in Ukraine might.