Ultra-Orthodox leaders search for a solution to the housing crisis in the sector, but they are not in favor of the solution proposed by the government to establish a new ultra-Orthodox town in the Negev region. 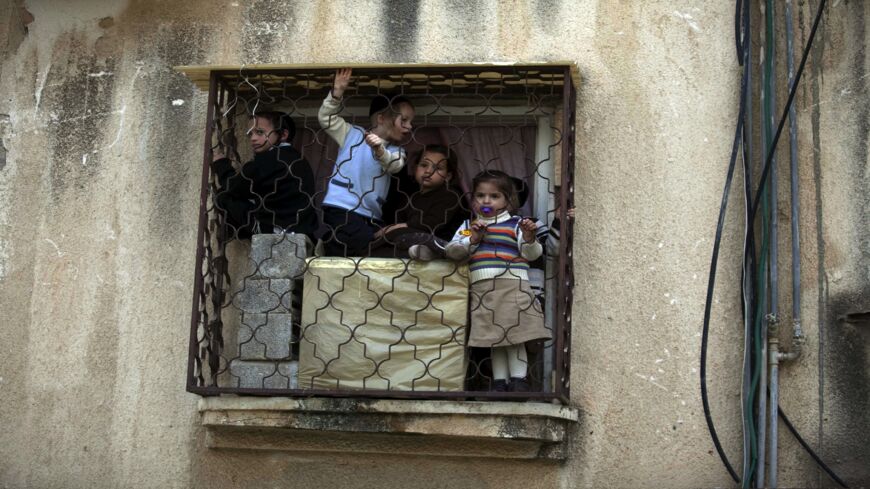 Ultra-Orthodox Jewish children from the Vizhnitz Hasidic dynasty look from the window of their house in the central Israeli city of Bnei Brak on March 14, 2012. - MENAHEM KAHANA/AFP/GettyImages

Prime Minister Naftali Bennett said March 13 that the government will push forward the establishment of the ultra-Orthodox town of Kasif in the south of the country. According to the plans, at the first stage, the ultra-Orthodox city will include no fewer than 20,000 housing units and will be built next to the Bedouin city of Kseifa. The government can thus allegedly kill two birds with one stone: achieve a solution to the terrible housing crisis among the ultra-Orthodox, and put a stop to the Bedouin expansion in the south by means of establishing a Jewish city that will end illegal settlements now happening on government land.

Truth be told, the plan has been on the ropes for several years now. The Housing Ministry has invested close to 30 million shekels in planning the city since the government first decided on its construction in 2007, but none of the governments since have arrived at the implementation phase.

What exactly does a town for the ultra-Orthodox mean? The plan considers the structure of the average ultra-Orthodox family, namely young parents with many children. It also considers the community’s unique needs and characteristics. Most of the families have no personal vehicle, which means that the town must offer efficient public transportation, stores near residential areas and not at out-of-town shopping centers, and schools within walking distance. There are of course religious needs such as a porch for a sukkah for each home, low buildings without elevators because of the Sabbath and much public space allocated for synagogues.

It’s no secret that the housing crisis is acute among the ultra-Orthodox. Every year, some 40,000 ultra-Orthodox couples marry, the majority of them younger than 20, with only the funds they receive from their parents with which to find housing. As of today, an average ultra-Orthodox parent gives 50,000 shekels ($15,000) to each child (a couple thus has 100,000 shekels [$30,000] from both the groom’s and the bride’s sides). Considering that the price of an apartment in ultra-Orthodox areas is more than a million shekels ($300,000) and that an ultra-Orthodox family can’t live in a non-ultra-Orthodox neighborhood, the possibilities are very limited.

With this reality, it’s no wonder that the parking levels of apartment buildings in ultra-Orthodox areas in Jerusalem and Bnei Brak have turned into crowded residential areas. At all of these buildings, you can find storage units turned into “apartments” not suitable for habitation and lacking even a single window, in which families with a child or two live, paying an exorbitant price of 4,000 shekels for this pleasure. This is a dangerous situation and is intolerable in every way, and the ultra-Orthodox public have protested it for years.

With all that, the solution of Kasif sounds ideal: tens of thousands of housing units sold inexpensively with good conditions. Surprisingly, it was ultra-Orthodox politicians who were responsible for preventing over the years the tractors from breaking the desert ground. Why?

Looking at the political situation in Israel of the past decade, it is clear that we are not talking about a red-tape problem. Ultra-Orthodox leadership was/is truly not interested in the Kasif solution. In the last government, ultra-Orthodox politicians held the most important ministries to allow them to find the solution to the housing crisis. Shas leader Aryeh Deri headed the powerful Interior Ministry, Yahadut HaTorah senior Yaakov Litzman served as Housing Minister and his colleague Moshe Gafni held the most significant role of chairman of the Finance Committee of the Knesset. They had the means to advance the town’s plan but instead made it clear that solutions to the ultra-Orthodox housing crisis should be found elsewhere.

The solution, for these ultra-Orthodox leaders, was actually the project of the ultra-Orthodox city of Shafir, which they wished to build near Kiryat Gat, much closer to the center of Israel. Deri, for instance, said in 2017, "I really do not understand why we have to go to Kasif if it is possible to construct a few 10,000 units in Kiryat Gat, Ashkelon and Beersheba, and establish an ultra-Orthodox city in the center instead of going as far (deep south) as Kasif." He added, "It's time to take this proposal off the table once and for all and tell the Housing Cabinet that if this proposal is so fantastic, then please, go ahead and offer it to secular Israelis.’’

But plans are one thing and reality is another. In fact, it seems that Shafir is happening slowly, if at all. The land for the city was appropriated from the Kiryat Gat municipality and transferred to the Shafir local authority. As it turned out, this decision only delayed the whole process and the land was transferred back to Kiryat Gat. At the same time, it turned out that the intended land is rich in the precious resource of red soil, which must be dug up before the land can be developed. In any case, two months ago, Housing Minister Zeev Elkin announced that he’s stopping the planning of Shafir.

At Kasif, on the other hand, the plans are already ready, which is why Bennett was able to make his March 14 announcement. Thus, paradoxically, it is the current government, which includes no ultra-Orthodox parties but does include Foreign Minister Yair Lapid (considered hostile by the ultra-Orthodox community), that moves the city of Kasif forward.