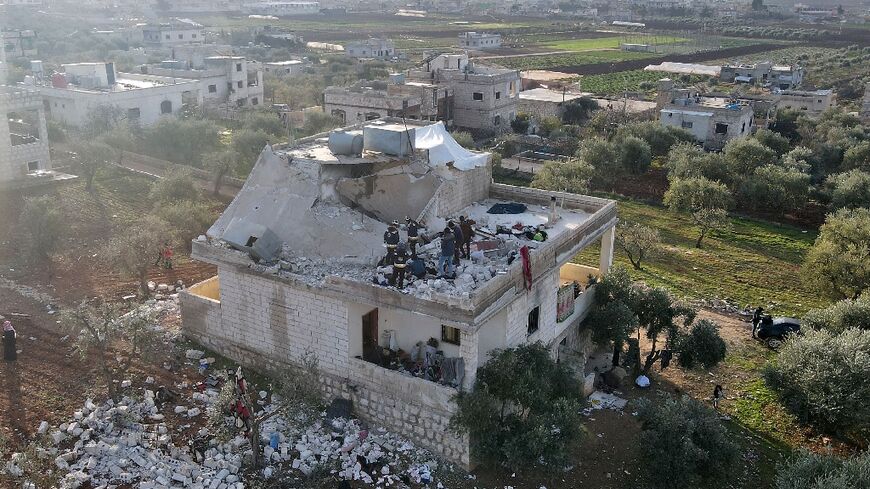 The house in which the leader of Islamic State (IS) group Abu Ibrahim al-Hashimi al-Qurashi died, during a raid by US special forces, in the town of Atme in Syria's northwestern province of Idlib - Aaref WATAD
by Hashem Osseiran with Didier Lauras in Paris
March 10, 2022 — Beirut (AFP)

The Islamic State group Thursday confirmed the death of its leader Abu Ibrahim al-Qurashi, more than a month after his demise, and named Abu Hasan al-Hashemi al-Qurashi as his successor.

Little is known about the new leader, who will serve as the jihadist group's third chief since its inception.

IS personnel have "pledged allegiance" to "Abu Hasan al-Hashemi al-Qurashi as an emir over believers and the caliph of Muslims," the group's spokesperson said in an audio recording released on its social media channels.

The recording confirmed the death of the former IS chief along with the group's ex-spokesman.

According to the White House and US defence officials, Abu Ibrahim al-Qurashi died when he detonated a bomb to avoid capture during a US raid that saw commandos swoop in by helicopter to an area in northwest Syria controlled by rival jihadists.

His demise, during the night of February 2-3 in the town of Atme in Idlib province, was the biggest setback to IS since his own predecessor, the better-known Abu Bakr al-Baghdadi, was killed around 15 kilometres (nine miles) away during a 2019 US commando raid.

IS' self-declared caliphate, established from 2014, once stretched across vast parts of Syria and Iraq and administered millions of inhabitants.

A long military fightback led by Kurdish-Syrian and Iraqi forces with backing from the US and other powers eventually defeated the jihadist proto-state in March 2019.

But IS remained a security threat, launching attacks from hideouts.

Abu Hasan al-Qurashi rises to the helm at a time when the group has been weakened by US-backed operations in Iraq and Syria aiming to thwart a resurgence.

According to the IS audio statement, he was endorsed by Abu Ibrahim before his death and the appointment was confirmed by the group's senior leaders.

The recording did not offer further details.

The new IS leader is an unknown figure, experts say.

"We simply don't know" anything about his identity, said Tore Hamming, a researcher at the war studies department of King's College London.

Colin Clarke, director of research at the Soufan Group, said that IS went "with a relative unknown because the bench has been thinned out considerably".

But he said "the new emir needs to be someone who can bring back a sense of momentum to the group's transnational brand."

At its height, IS pulled in foreign volunteers who considerably bolstered its Iraqi and Syria core.

Damien Ferre, director of the Jihad Analytics consultancy, said the choice of successor had likely been made before Abu Ibrahim's death to avert internal divisions.

"The decision was made early to avoid a strong destabilisation of the group," he told AFP, explaining that similar logic applied to the 2019 succession.

But "they probably delayed the announcement for security reasons and perhaps because the other spokesman, Abu Hamza, was also killed."

After losing their last scrap of territory under a US coalition backed military onslaught in March 2019, the remnants of IS in Syria mostly went to desert hideouts.

They have used such hideouts to ambush Kurdish-led forces and Syrian government troops.

The jihadists also continue to mount attacks in Iraq from hideouts.

A UN report last year estimated that around 10,000 IS fighters remained active across the two countries.

The jail break attempt from the sprawling Ghwayran complex in the northeastern city of Hasakeh triggered a week of clashes inside and around the facility, leaving hundreds dead.

But hundreds of IS prisoners, including senior leaders, are thought to have escaped, with some crossing to neighbouring Turkey or Turkish-held territory in Syria's north, according to the Britain-based Syrian Observatory for Human Rights war monitor.